Got this from Leigh Maida (Memphis Taproom, Local 44...hey, you know who I'm talking about!). This is the final upshot of the whole thing, the whining, grumbling, "we knew you were breaking the law, and here's your punishment" backhand from the BLCE: 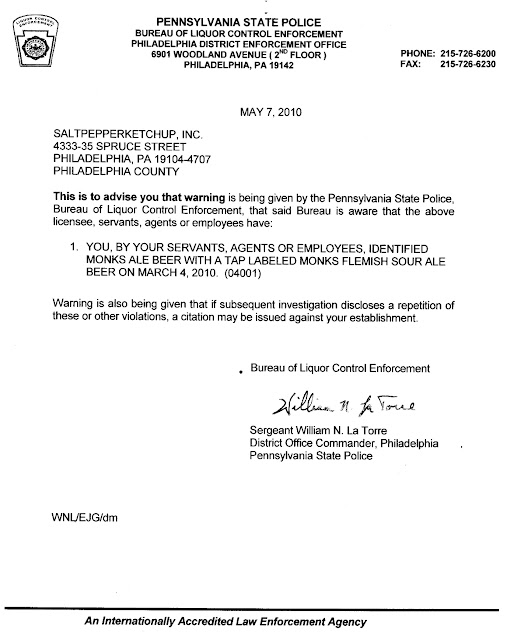 YOU! You bad licensee, you! Can you imagine? It would be like selling Lehigh Valley 1% Lo-Fat Milk from a dispenser marked "1% Milk." The scandal! And this is, after all, from "An Internationally Accredited Law Enforcement Agency." What a pathetic whining.

Good news is, they're going to get the kegs back, and Leigh says when they do, they're going to blow it all out at $1 a glass! That's by way of saying thanks to everyone who stood by them through this ridiculous crapola. If you're not on the Local 44 e-mail list, get on it: that's where they'll be making the announcement.

All's well that ends...stupidly, I guess. Except I don't really want this to end. I want to grab this and beat the agency to death with it. Don't forget this, folks. We'll come back to it.
Posted by Lew Bryson at 08:15

"I want to grab this and beat the agency to death with it."

Me too. Please let me know if you ever require any assistance. Cheers!

Jesus. That makes me more angry than ever. The Stupid is hard to swallow.

I guess we can't make a big campaign about this missive since it could only mean trouble of Brendan and Leigh, but that notice ought to put on posters and carried prominently on every beer blog in the area with an appropriate headline for months.

Seriously, the raids just annoyed me considerably; this has me livid.

Keeping to the letter of the law so that they save face, but I think it only reinforces our belief that they don't know what they're doing! Of course, they couldn't just let it go with nothing after all the hoopla it caused, but a more general warning would've been more appropriate and better received.

Actually, this letter is even more absurd because your analogy should be flipped around.

Selling the beer as "Monk's Cafe Sour Flemish Ale" tells consumers MORE about what they're getting (vs. the somewhat ambiguous 'registered name'), not less.

It's like saying "milk" is a registered beverage. How DARE you mark your milk dispenser with the unregistered name "Lehigh Valley 1% Lo-Fat Milk"?!?

This whole thing is #$%^ing outrageous.

So when do we read about this in all the Philly newspapers and alt-weeklies?

Ale Beer. Incredible. Would it be so hard to, I don't know, maybe have the people enforcing the law actually be informed about the products they are tasked to enforce?

The incredible stupidity of a Law Enforcement agency mindlessly following the rules as laid down by some faceless bureaucrat shines as bright as I have ever seen in this example. Ass covering by law enforcement is an ancient tradition and is obviously well practiced there. Someone had to blame someone for something. Now we know what and who got chosen.

Keep railing at them, Lew. Just because rules are stupid is no reason to keep them, even if they think they might make money for the State.

So they labeled the beer properly and since it didn't match the State's error they get this letter? I'm glad I'm in Delaware.

I'd still like to hear about Part 2 of the hearings post. I know you are busy, but this is IMPORTANT Lew. :)

I'm an Indiana resident so I am a bit out of the loop on some of what's been going on... but did I really read that correct? That's just insane to say the least!

I think the BLCE has a job for you, Sandy...

Again, can't the blame be traced back to the brewer? They are supposed to register the beer, and they provide the tap handle to the wholesaler, who then provides it to the retail account.

Why does the tavern get spanked instead of the brewer? Not that I want anyone to be disciplined, but this just seems ass-backward in more than one dimension.

As silly as New York State is, PA is really a laughingstock. I would expect this kind of thing in Alabama or Utah, but this is nonsense.