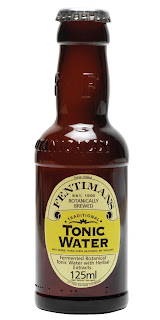 I know you're all waiting on several things, and I will get to them, but...something else first. Back in January I got a box of samples from Fentimans: non-alcoholic, naturally flavored soft drinks. We tried them -- the Curiosity Cola (quite different), the Dandelion and Burdock (not pleasant, I'm afraid, kind of like bubble gum and meat), the Ginger Beer (good, but there are others just as good for less money), and the Victorian Lemonade (meh...but more on that later). There was a bottle of Tonic, but it was hardly G and T weather, so we put it aside. I didn't blog on them, because unless something's spectacularly bad, I don't generally blog on things that are so-so.

Then it warmed up, and I asked Cathy if she felt like a gin and tonic, her preferred hot-weather tipple. I sliced up a lime, cracked some ice, poured in a measure of Burnett's Gin (which alternates with Gordon's as our house gin), and fizzed in the Fentimans Tonic. Cazart! What an awesome drink...and look, we buy Burnett's because it's good (and quite reasonable in price), not because it's wonderful, but this stuff took Burnett's by the hand and led it to the promised land. What a fricking zing in a glass. Then I tried some gin in the Victorian Lemonade: we split on that one, I loved it, Cathy hated it. Try that yourself, but I think I may have to try some of that Schweppe's Bitter Lemon stuff.

We're finding more Fentimans. I suggest you do likewise, before Memorial Day and the traditional start of the G and T season.
Posted by Lew Bryson at 20:40

Welcome to the G&T party, Lew. A gin and tonic made with great tonic water, Fentimans or Q or Fever Tree, is simply a different animal than one made with the sweeter, more widely available, glucose/fructose stuff.

I started getting on board about three years ago, when I did a blind gin tasting as a favor to a friend, and realized that I was wrong in thinking I didn't like gin. What I didn't like was shitty gin. I'm expanding my horizons.

I haven't had a G & T in a while now.. and this sure has me thirsty for one. I am going to have to look for something other than the generic tonic waters though, never seen anything other than Schweppes or the grocery store brand. I will be keeping my eyes open now.

I'm all about Big ben's tonic and A-treat tonic with my gin, in the spirit of think globally drink locally and all...

Didn't know Big Ben made tonic! Look at that, they do: cool, I'll pick some up next time I'm in the area. A-Treat, that I can get. Is it good?

Ben's has some serious quinine flavor going on A-treat is milder but both are good.

nice thing about Big ben's is they come in those little 7oz split bottles which are perfect for making 2 Gin and Tonic highballs and if you use blue coat gin you can enjoy a drink that is 100% pennsylvania! if you perfer Western Pa you can mkae Moscow Mules with Boyd & Blair vodka(glensahw, pa) and Jamacia's Finest ginger beer (Natrona, PA)

Right on, or for mules go Jacquin's vodka (why pay more for vodka) and big bens ginger beer for an another all-PA mule (although the lime would be hard to source).

Yes. Fentimman's. Try using Leopold Bros. gin. The herbal quality of each plays off the other. Beyond promised land, and firmly into the realm of Nirvana.

I love G & T in the summer, very refreshing drink. However, I have found that cheap gin gives me a headache and is more likely to make me feel crappy in the am. So, i try to buy better stuff, I'll try the Burnett's you mention in the article.

If you're looking for a very reasonably priced vodka, my money is on Svedka. Excellent straight!