Getting ready to leave for the weekend, and this was always one of my favorite road songs.

So let's have some beers, woowoo!


Victory Anniversary 20 Experimental IPA, 5.5%
A 5.5% "refreshing session ale"? No, guys, it damned well isn't. I really thought Victory of all people got this; they have sub-4.5% beers on tap at the brewery all the time. This is the kind of bullshit I expect from breweries that don't give a shit about anything but sales, not a brewery that has always cared more about the beer, and about truth. I'm concerned about this, and yeah, it's pissing me off. We can do better. If "session" doesn't really mean anything to you, stop using it. If "session" just means "we hope you drink a lot of this here beer," stop using it. If it means "great-tasting beer with significantly lower ABV than average," by all means, use it. I have no trademark, no enforcement authority, just my small bully pulpit. I intend to use it.
But I'm a professional, so let's give it a fair taste. Nose is pretty shy; all I'm getting is some faint sweet lemon, despite a very vigorous pour and plenty of fluffy white head. It's a gorgeous beer, but the aroma's a bit like a Wet-nap from a barbecue joint. Well, damn. The taste isn't much more electrifying. There's good bitterness at the end with some of that lemon lift, and a decent malt float, but otherwise, this is pretty tame stuff. What the hell?

I really expected a lot more for a 20th anniversary beer from Victory, after the awesome 10th Anniversary Alt, and even the recent Vital IPA, which I found damned tasty. This one just isn't doing much for me, and that's the beer talking, not the label with its "Session/5.5%" crap. Middle of the road, and the least exciting Victory beer I've had in quite a while. I'm hoping for more from the (official?) XX Anniversary Imperial Pilsner.


Coronado Imperial Blue Bridge Coffee Stout, 8.0%
Expectations are high here: I like Coronado beers, and I love coffee beers, so I couldn't wait to get this in the glass. This is a bumped up version of Coronado's Blue Bridge Coffee Stout, celebrating the landmark San Diego/Coronado "Blue Bridge," which I have to admit has figured prominently in a series of nightmares I've had in which I'm driving across it...and it suddenly ends, leaving me flying through the air like Henry Gibson the Illinois Nazi. I'll try to muscle past that.

Pours very dark indeed, no surprise. Huge, no-nonsense coffee nose: mocha, bright acidity, some cocoa and unripe apricot. Very promising indeed. Whoa. I was going to start typing in flavors, had even started, when the totality hit me. That's one beautiful beer in toto, as the entirety, as a well-sculpted integral sensation: seamless. I appreciate that kind of thing a lot more since learning about whiskey. Nothing sticks out, but it's not because it's not big; it's a whopper. But everything is in place, the balloon expands evenly. I could drink this entire 22 oz. beer way WAY too quickly and easily. The Cafe Moto coffee and malts meld beautifully. The only nitpicky little flaw I find, and I hesitate to even call it a flaw, is that there's a touch of stickiness at the end. But to point it out is to quibble. That's a damned good beer.


Now...I promised to try to get a draft in, but I'm going to ask you to wait for it. I'm going to a brewpub (Elk Creek Cafe in Millheim, PA) tonight, with my wife, and I'll take notes, and post it up here as an update tomorrow. 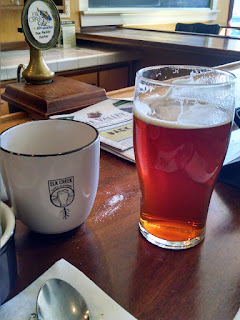 Nitro pour at Elk Creek Café and Ale Works. 20 oz. pour, $5: good value! Great buffed leather color, moussed foam, and a nose full of juicy Brit malt and earthy, herbal British hops. So smooth and full, slippery and supple with malt, and fully hopped with those tricksy Brit cones: so unfamiliar to American drinkers in these days of super-citrus and power-pine that many think a beer like this is underhopped. Not so, and this is firmly bitter, but balanced. Drank several of these Friday night, had some more last night, and it's a good brunch beer today.

Email ThisBlogThis!Share to TwitterShare to FacebookShare to Pinterest
Labels: Beer Friday, coffee, Coronado, not a session beer, not about Uncle Jack, Victory

Every single IPA they put out anymore just tastes like Prima Pils with a different more intense hop profile... Vital IPA being the lead culprit... to Crisp for my liking

[quote]...and it suddenly ends, leaving me flying through the air like Henry Gibson the Illinois Nazi.[/quote]

You get those too? I hope it has more to do with acrophobia than beer drinking!

FYI -- stay outta Milwaukee, that scene was filmed on the (then being constructed) I-794 bypass bridge:
"The Hoan Bridge was temporarily closed on December 13, 2000, after two of the three support beams of the lakefront span failed, causing the north-bound lanes to buckle and sag by several feet and leaving the span in a near collapsed state."

If you ever need to hit Cream City for a beer event, I can show you the routes to avoid this nightmare inducer. ;)

I do! But I don't really have a fear of heights.

That Yarrington knows his shit!

He certainly does; there aren't many more uniformly excellent standard lineups at small brewpubs.