Okay, back to the music. I sang Fauré's Cantique de Jean Racine a few years ago with the chamber group at St. Andrew's in Newtown, Penn., and lately it's been running through my head. I asked my choir director for a recording, and he pointed me to the Cambridge Singers. Quite peaceful, but at the same time energizing. One of my favorite bass parts, so well-matched to the words.


Relaxing, right? On to the beer!

Hijinx Pitch Penny ESB, 4.7%
My draft for the week, sampled yesterday afternoon at Isaac Newton's in Newtown. I've been to HiJinx and think it's one of the better examples of the recent new crop of breweries in eastern Pennsylvania...but I rarely see their beers. When I spotted this one — on the heels of a discussion with someone about how few ESBs there were available lately — it made what was looking like a tough decision (Isaac's usually sports a pretty great tap list) into a slam dunk. 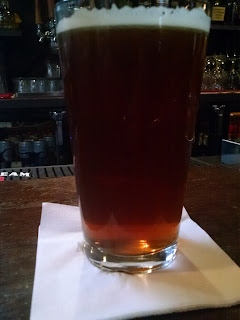 Nice color; perfect copper penny look of an ESB with a coffe crema head. Not a ton of aroma; what's there is mostly malt. Mmm, and so it is on the palate. Not as fully malt-tilted as Fullers, and that's maybe a style issue (not as big a one as the jackass next to me, who smells like he's a Lebanon bologna that was smoked over Marlboros. Going outside is not enough, fella, try standing upwind of yourself next time!)

Okay, back to the beer. ABV is about dead-on, that's an up-check, the color nails it, another up-check, and if it's a bit too bitter, well...it's America. I'll tell ya...throw a different yeast in here, give her a touch more malt, maybe tweak the hops a bit, and you'd have a kick-ass altbier. Something to think about. In the meantime, I'd go back for more, and I think it's the best HiJinx beer I've had. Not enough ESBs, as we said to each other in that discussion I mentioned.

Starr Hill Reviver Red IPA, 6.2%
I remember when Starr Hill was a little storefront juke joint in Charlottesville, running an old, old JV NorthWest system, with Mark Thompson's energetic good-beer vibes flashing wildly around the place. They had a weirdly grand plan for blending good beer and indie music, and I know I thought, yeah, whatever, good luck with that.

Well, the joke's on me. Starr Hill's been pretty successful with that plan (didn't hurt that Mark won a damned sack-full of GABF medals over the years; good beer deserves success), and the label of Reviver — an octave of piano keys — is a reminder. Good for them! They still put out pretty damned good beer, though, as was the case before, it tends to get overlooked by the geekerie. Let's see if they're right or wrong.

Very aromatic, with pine and juicy citrus singing over it, but not like the Fauré, more like a gospel choir getting real busy...but when I take that first sip...almost all that lively is gone, smacked down in a double shot of bitterness and overdone specialty malt. The happy hops try to break through, like a couple rays of sunlight in the dark blood-red gloom, It's a big enough beer, but it's big like a mean sonofabitch in black overalls. I may not have been as hard on this if the hops hadn't smelled so damned good, and I wanted it to be that way, I wanted that piano to ring out "The Old Landmark" and get Jake to see the light. I'm just not feeling it. If they could have kept this lively and still big, I think I'd have loved it. But I'm left wanting it to be something it's not.


Deschutes Hop Henge IPA, 8.9%
Hop Henge is a new set of hops every year. Hop research is getting so advanced that this year, two of the three hops in Hop Henge don't even have names yet. That's the kind of shit you can do when you're Deschutes and you're so close to the green gold of hop country. The third hop is Mandarina Bavaria, which is supposed to "lend hits of orange, mandarin, and tangerine." Somebody wake the druids, it's time to try this.

Smells like the non-alcoholic fruit punches my grandmother used to make. She was a genius at combining fresh fruit, canned and frozen juices, and a little bit of soda to make some really delicious drinks. Fresh, fruity, and no pine there a-tall. Nice.

Like drinking sunlight, boys and girls. Honestly, I took a glass, and I had this memory of walking through the woods behind my aunt's house 45 years, sunlight streaming through the trees. Light bright stuff this is, and the fruits are subtle in the mouth, the bitterness is trenchant but balanced (at 90 frickin' IBUs, it's balanced), and the finish does not put the pliers to my tongue, instead there's a lingering sticky resin pull and a nice undertow of those fruits. Sure doesn't drink like 8.9%, either, more like 5.9%. This is dangerously, drinkably delicious.

It's not so much being close to hop yards but to OSU, which has the preeminent hop research program in the country (probably in the hemisphere).

Thanks for that clarification, Jeff!

Now I'm remembering the kid-friendly punches of my youth... and making a note to be on the lookout for Hop Henge. Thanks! I have had poor luck with Deschutes (nothing against the quality of the beer, just that my tastes and theirs haven't meshed so far), and hope that this one and I hit it off.