I'm going to split things today; not to boost my post count, but because I've got two new whiskeys that deserve my full attention, and the one's got a lot more story to it. That comes first. 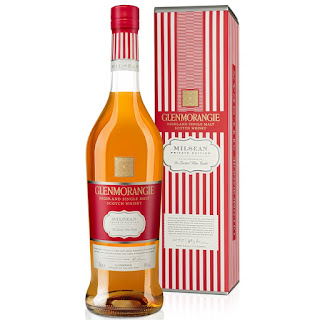 Glenmorangie Milsean, 46%
There's a group near me that calls themselves Whisky Blasphemy. They're a good bunch of folks who don't take whisky too seriously; which is to say, they understand that it's to be enjoyed...anyway you want. So if that means Pappy Van Winkle 23 Year Old in Manhattans, or a Macallan Rare Cask Old Fashioned, well, that's what you do! With that kind of attitude, it's not very surprising that they have quickly become a large and surprisingly influential group. So much so that they managed to convince Glenmorangie let them host one of three simultaneous American telepresence events (along with ones in Chicago and San Francisco; yay, Philly for stealing that from New York!) for the prelaunch of the new Private Edition bottling, Milsean, Gaelic for "Sweet Things," we were told.

The guys at Whisky Blasphemy were good enough to extend an invitation to me to join them (thanks, Jun; thanks, Judd!), so I did, about three weeks ago. It was at Holt's Cigars in far Northeast Philadelphia, where Whisky Blasphemy has their regular Thursday night meet-ups. I got there to find that the bar had been transformed with red-and-white decorations and candy everywhere. Glenmorangie's whisky creator Dr. Bill Lumsden's stated goal with Milsean had been to create the aromas of an old-time candy store, with the red-and-white striped sacks the candies came in. Cute.

We all got stuck into some drams (Glenmorangie Original for me, never turn it down), had a cigar, and talked. Glenmorangie brand ambassador David Blackmore was there, always a fun guy to chat with (and a big fan of Tasting Whiskey, I'm happy to say; 'the one whisky book I actually use,' he told me). So we ate salmon and talked whisky, and had a great time.

The simulcast came about 45 minutes after I got there. It was Dr. Bill and his likely successor (not for a while yet!), Brendan McCarron, the "head of maturing whisky stocks," in the tasting lab at Glenmorangie. Here's what I got in my notes.

The Private Editions are experiments in methods and flavors in small production runs. And since they all start with the same light, Glenmo spirit, we were poured a sample of Original, the 10 year old, the first Glenmorangie Dr. Bill ever tasted, back in 1984. He tasted with us, and I grabbed some of it: 'Meadow freshness, rose, geranium. Vanilla reminds me of carnations. Creamy texture, apple, pear, vanilla, and honey. The finish: almond, coconut.' That's what he has to start with. "It is a fast-maturing spirit," he cautioned, so they "have to be careful with the finishes; it will pick up flavors quickly."

When he designed Milsean, he had that old-style candy shop profile in mind, and of course, he couldn't just add those flavors. Where to find them? Had to be from the cask, so he consulted with the wood wizard, Dr. Jim Swan, who's done such fantastic work at Kavalan, among others. What they came up with is nothing less than revolutionary. They took freshly dumped wine casks, wet casks and re-toasted the oak (radiant heat; open flame would have burnt the sugars) without any "de-charring" of the wood, as the careful scraping of the inner layer is called. Heat on the fresh, wet wine caramelized the sugars in the wine, giving a whole new range of flavors and aromas to the finish. Brilliant idea, really.

The wine? Nothing famous, plain Douro Valley Portuguese table wine, and that was selected because the cooperage that agreed to do the work on the casks was nearby. They originally planned to have the whisky in the casks for 5 years, but after a year and a half, "it was picking up flavors fast." Brendan made the decision to dump the 269 barriques after 2 and a half years, after which they were 'married' in a vat for six months.

Then we tasted it...which I'm not going to write about, because I'd been smoking and almost everyone in the room had a cigar of some type going. I just drank the whisky, and enjoyed it...and requested a small sample bottle, which I'm now going to try in my quiet, clean tasting area. Ah...I had thought that this was a 'shy' whisky without much aroma, and now I see that's the cigar talking. This is not shy, it's almost chatty! And yes, there's candy there: nougat, circus peanuts, some lemon drop, butter mints, and orange slices, pretty mouthwatering altogether. Taste, though, and it becomes clear that this is for adults. The candy flavors are all there, but there's also a firm malt base and some no-nonsense alcohol heat, with black pepper and bright floral notes. The longer it's in the mouth, the more the wood emerges until it's a pretty full grip on the finish. The finish is surprisingly firm, actually, after all this candy stuff. Some water opens things up: the heat's gone, and the candies come through more clearly, and it's more oily.

Now...yes, it's another No Age Statement (NAS) whisky, and I gather I'm supposed to 'tut tut' disapprovingly and note how this is just another way the whisky companies are cheating us out of value. So...it's approximately 12 to 13 years old, and they're getting just shy of $100 for it. Tut tut. Here's my "tut tut." Only one person knows if this whisky is "worth" its price, and that's you. After a certain point, the label can only tell you so much, you have to open it up and taste it and make up your own mind. I think this is pretty good, and what's more, it's pretty interesting. And I'd add something Dr. Bill said, which is a variation of something I've been saying for a while (namely, that NAS whiskies have been around forever, and the only ones people complain about are the ones that aren't that good): "It's not anything new to us. We released (Ardbeg) Uigeadail back in the early 2000s, and no one ever asks about the age because it's so good. This is a trend that's here to stay." Tut tutting complete.

Come back later for another new whiskey!
Posted by Lew Bryson at 15:42