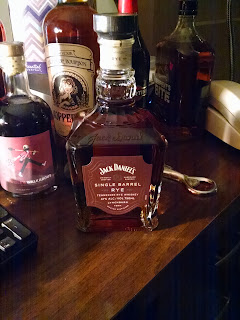 Completely different whiskey for the second one of the day:

How old is it? They aren't saying. Now...the unaged JD Rye first went out for sampling in October of 2012, so hmmm...no, no way this is less than 4 years old. Let's have a sniff and sip.

Sweet vanilla, a bit of blackstrap molasses, fruitcake, and dry mint, all wrapped up in a basket of hot oak, Damn, it's like JD Single Barrel without the corn! Which makes it a head-turner on the tongue: you get the vanilla, and the sweet, and the little bit of woody/maple flavor, and you expect that corn, but instead you get grassy/minty rye, with a mouth-coating sweet creaminess that goes into the finish and catches with a light oak fire over the back of the throat.

Sweet rye. Weird idea, and I don't want to like it because rye's supposed to be spicy and savory, but it's growing on me. Tennessee rye is a real thing, I guess. Price is about the same as the regular Single Barrel Jack at around $50. You're going to want to try this and make up your own mind, but I really want to try this with some good ginger ale. That's gonna rock.

OK, I am confused or somehow misreading the post. If this was initially distilled and released around October 2012 as an unaged rye then there is no way it can be more than 4 years old, right? Or did I overlook the sarcafont? For this to be at least 4 years old it would need to be distilled and barreled as early as January 2012 or so. But it was not released as unaged rye until October 2012 unless some of the first distillate they made went into the barrel well before the release in October 2012 of the unaged version. I know age isn't everything but it still has some value in evaluating a whiskey, especially a new one. And if less than 4 years old then wouldn't it also need an age statement? I can never keep up with all the rules!

Right! That's why I phrased it that way: "first went out for sampling in October of 2012..." Because yes, if under four years, it would have to say so (and it definitely doesn't), but it doesn't say "straight" whiskey, either. That doesn't prove anything, though: neither does Jack Daniel's Old No. 7!
I'm pretty sure what happened is that they were putting whiskey into barrels well before that unaged version came out in 2012. The way this stuff looks and smells, it ain't 3 year old rye.

Well, OK. At least we seem to be on the same page! I am curious to try it whenever it finally makes it way to Georgia, which seems to almost always lag behind most of the country thanks to its prolific bureaucratic red tape.