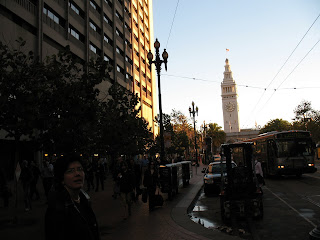 Monday was a day to play. Cathy and I got up jet-lag early, and headed out into the sweet, clear dawn to the Ferry Building, as you can see in this picture from outside the hotel. We hit the market, only to find that most of the shops didn't open for another two or three hours. What?
Doesn't San Francisco believe in breakfast? We got a cup of Peet's coffee and headed down the Embarcadero, munching on a sourdough loaf for sustenance, and looking for something more solid.

Well...it didn't happen. We walked for about three miles, for over an hour, and found nothing but coffee shop after coffee shop -- with only java and muffins -- and a few Chinese places, but Cathy didn't want stir fry bean curd, and I didn't want muffins. We did see a lot of neat scenes, some weird stuff in the Tenderloin, and got some exercise, but wound up settling for a coffee shop near the hotel and an oatmeal for her and a "Southwestern egg & cheese sammich" for me. Feh. 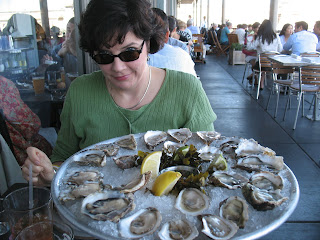 Back to the room, where Cathy took a nap (which she can do in any conditions) and I took care of e-mail and such. At 11:30 we headed out again, and had lunch at the Hog Island Oyster Bar in the Ferry Building. Oh, yum. Not the cheapest lunch I've ever bought, but the 2 dozen varied oysters were delish (looks like Cathy liked them too), and my oyster stew was easily the best rendition I've ever had.

We trekked back to the hotel and caught a cab to the Anchor Brewery. I'd never had a chance to tour the brewery, and this was a signal moment for me.

We were right on time for our 1:00 tour, and after two superbly fresh glasses of Steam and a short pleasant visit with Fritz Maytag, walked into the brewhouse, where a batch of 2007 Christmas Ale was in the mash tun (and right up to the brim of the mash tun, too). We checked out the shallow lager/steam tanks (where we were told that only the Steam was brewed with a lager yeast; all the other beers were done with the same ale yeast), the open ale ferment tanks, the big closed tanks used for conditioning, and then to the bottling line, where I found this six- 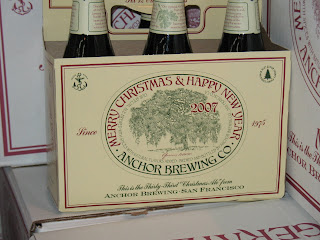 pack of just-packed 2007 Christmas Ale (sorry: didn't get a taste, it was embargoed until Nov. 5).

We also toured the distillery, where we got a sample of the new Genevieve, a genever they're making and will be introducing at WhiskyFest tonight. Quite nice; big and flavorful, plenty of body, and the blend of botanicals shifted away from juniper. Anchor is experimenting with a lot of different barrels and toast/char levels for their whiskey, and have committed to the longer-aged Hotalings rye whiskey.

Just to make things complete, we went across the street to Fritz's winery. They're crushing and ... well, all that stuff wine-makers do. We saw fermenting grapes, tasted some young wine (very peppery, eye-openingly tannic), and talked Brix. And then it was over, and we caught a cab.

My friend Jon Binkley had suggested I stop at Zeitgeist, a biker/bike messenger bar on Valencia. Well, what the hell, I'm an affable guy, we went. It was a good time. Yeah, it's scruffy, but no one was rude, no one was pushy, none of the stuff the reviews at Yelp squealed about happened. Er...it was a Monday afternoon, of course. It was real nice out back in the outside area: old wood tables and benches, wild mural art, and a barbecue smoker going. We had a couple IPAs (Big Daddy and Racer 5), relaxed, and then headed up over the hill towards Suppenküche, the German place where we were supposed to meet Jon.

We were way early, so we stopped along the way for an espresso (watching al Jazeera on the shop's TV), walked down Hayes and looked at the shops, stopped in the Place Pigalle bar for another beer (I had a Deschutes Black Butte, Cathy got a Pilsner Urquell that I helped finish), and then walked back up the street to Suppenküche. On the way, John Hansell called: he was bored, Amy was getting a massage, and where was it we were meeting for a beer? Come on down, I told him, I'll hold a lager for you.

Suppenküche was great. Not just six different Oktoberfest beers on draft, but three Weltenburger Kloster beers on draft! I got the Weltenburger Ofest, which I'd never heard of, let alone tasted. About the time I got the first sip in, Jon walked through the door. I haven't seen him for about five years, and it was good to chat. He ordered up the same thing, and then he and Cathy started talking science (he's doing some kind of protein mapping project at Stanford). John showed up and stood the next round (more Ofest), we all remarked on how good the food smelled, and maybe we should come back next year. Then we did a round of wheat beers -- Schneider, Franziskaner, and Erdinger dunkel -- that left us dissing the dunkel; the Schneider was a clear fave, as it often -- always? -- is, the Franz was good, better than I remember, but the Erdinger seemed to have none of the classic hefe character. 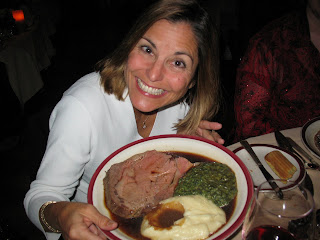 We had to run for dinner. Jon walked down to Van Ness with us, and waited till we managed to catch a cab; great to see you, Jon! Dinner was at The House of Prime Rib, and man, was it ever. Check out that link, and you'll kind of get the idea. All they serve is prime rib (well...okay, if you insist, they also have grilled fish), which Amy happily models for you on the left. You have a choice of four cuts, mashed or baked (my baked spud was incredible), creamed spinach or creamed corn. Dinners come with salad and Yorkshire pudding. That's it. Oh, and bread and cornbread. Cocktails? How about a Sazerac? I can't get that for you, sir, only because we have no Herb-Saint. So I ordered an Old-Fashioned and our waiter asked if I wanted bourbon or rye; rye? Which one, sir? Wow. Good drink, too.

The choice of THOPR was Dave Keene's, who joined us for dinner with his...well, I don't know what Jen's exact relationship is with Dave, other than a close one. She was a pistol, and we got right into it over the whole IPAs rule/lagers suck thing that seems to be the way things go in the West. Well. You know. We were both laughing. We just had a great time, all of us, laughing and eating and drinking. The meat was superb, as was the fiery fresh-grated horseradish. We ate, we talked, we got ready for today. And then we went back to the hotel, and that was the end of Monday.
Posted by Lew Bryson at 01:06

Sounds like you did the beer tour I did in San Francisco 2 years ago. Zeitgeist is great. I did almost the same exact trek you did in a day, except I added in Toronado for good measure.

Breakfast? Buena Vista Cafe, Hyde and Beach, at the end of the cable car line down near Fisherman's Wharf and right around the corner from Ghiradeli Square. The place that claims to have invented Irish Coffee and makes the best one you'll ever taste.

Good breakfast. Kinda touristy, as you'd expect, but probably less so in the early morning hours. House beer made by Lagunitas, at least the last time I was there, about four years ago. I go there every visit because I went there on my first visit, second morning, and was reading a book called How To Spend One to Ten Perfect Days in San Francisco in the Square afterwards while my wife window shopped, near noon, and that was, according to the book, exactly where I should be mid-day on the second day. I took that to be a message from the universe.

But it was long ago, in, as they say, another country. And the (woman), if not dead, is gone, so perhaps the advice is more nostalgic than valuable.

Also see if the Tadich Grill still exists. Cash only, old-fashioned grub and drinks, don't know how the beer list would be these days. It was, would still be, the city's oldest restaurant. Have a Manhattan.

Been to BV, Jack, but we were strictly on foot, just a bit far for that. And they've finally admitted that they didn't invent Irish coffee, but that they were the first in the U.S. to make it. Sensible.

We walked past the Tadich earlier today, didn't have time -- which is the plaintive cry of this visit, way too short!

Sam,
they might have selection and service, but they're going to be hard-pressed to beat the view!

Man, I've heard nothing but good stuff about Suppenküche from friends in the area, I have to get out there again just for that!

Lew, are you planning to get south of the bay toward Sunnyvale? There's a brew-pub there, Firehouse Grill & Brewery, Steve Donahue is the brewmaster and has a terrif. Okto on tap (he sent me a sample growler -- yum!) -- stop in and say hi!

Steven,
I had planned to get over to Triple Rock, in Berkeley, and to Marin, on the north side, but damn, there was just no time! We're already making plans for next year.

OK, how is it I have never heard of the House of Prime Rib before this? Sweet Jeebus, are you kidding? My favorite food, and a place dedicated to serving it!? I think I know where I'll be eating next time I visit Toronado.

Sounds like a great time, glad you enjoyed your stay in The Bay.

I dunno, Rick, but the counter-logic of a prime rib joint in SF tickled us. Van Ness and Washington, bring your checkbook.

Went to Napa for business in March. On my way back to SF to catch the plane to PHL I toured the Anchor Brewing Co. (I also toured the Fairfield, CA Bud brewery). It was a great tour. The tour guide was knowledgeable and the beer was free flowing. We sampled each Anchor proudct