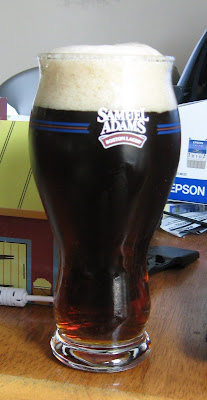 You know Boston Beer does their big Longshot contest every year, giving a couple homebrewers the chance to put their beer in the Big Time and get it brewed, bottled, and distributed by Boston Beer. Pretty cool stuff, and just one more way Jim Koch proves that he really does Get It.

But didja know they also have a New England-only contest for homebrewers to win a chance to get their beer on draft at Gillette Stadium during the New England Patriots season? Now that is sweet, 18-1 or not.

Best of all, after the disappointment of not being able to make one of last year's Longshot winners, a double IPA that just couldn't be brewed because of hops shortages (not prices, we were told: the hops just couldn't be bought at all), this year's Patriot Homebrew, from Massachusetts resident Adam Walsh, is a by-God IPA. And Boston Beer sent me two bottles, so I'm going to taste them. Yes, it's only available at Gillette Stadium, on draft, but...I did make that promise...so here we go.

Wow, that pours pretty! Big head (and yeah, I know, the Sam Adams glass is for Boston Lager...big deal), and deep amber/copper body. There's a wicked sharp pine/pineapple aroma coming off it (with a sweet teasing hint of peach or nectarine) that promises hop!!! and man, it does deliver in the mouth. There's no compromise about this baby, you're getting a bitter shot to the chops that rocks you, and then lingers like feedback echo, with a little bit of alcohol heat underneath to keep things cooking and clean. But it's not whiprazor sharp hopjuice, there's plenty of ballast under there to keep it lined up and on-target.

I was just playing Burnout Revenge last night, see, and this beer drinks like the heavy van in the Crash game. You launch something like the 4X4 pickup or the custom crash vintagemobile, and you've got speed, zing, all that jazz -- but hit a ramp in the wind and you're screwed. Put the heavy van up the ramp and BOOM. It's going right where you want it, and where you want it is getting smashed. This is like that.

Only issue is a slightly green character to the hops. Normally I like that, it's fresh, it's cool, but this is more leafy than hoppy. Not great, but minor. It actually seems to be diminishing as the beer warms a bit.

Going to a Pats game? Brother, do they ever have your beer ready. Thanks, Adam; thanks, Jim.
Posted by Lew Bryson at 15:18

Oh man, for once I'm jealous of Pats fans. That brew looks (and sounds) great.

BTW -- don't they tout the glass to be perfect for any beer?

Judging at Longshot this year, a LOT of the judges had been at the Patriot comp as well, and had universal praise for that IPA (technically a DIPA in judgingland), generally followed by wistful looks and idle lip-smacking.

Oh, and the glass: it's supposed to good for other beers, but optimally perfect for Sam Adams Boston Lager. Just so's ya know... As David Geary said to me, the light of (faked) inspiration in his eyes, "This glass...is a revelation! Hey. It's a glass.

Too bad that an apparently-top-notch beer is going to be wasted on a bunch of Yahdood Pats fans.

More like, it's too bad it'll be wasted on the Pats fans who can afford and find ways to go to the game! Some of us do enjoy good beer, Bill. Especially the one's who live blocks away from Boston Beer Company! Drat! Curses!

if there a way to get this IPA without going to a Pats game? Is this a test to see if it sells?

I was at the game Thurday night. Had the Homebrew IPA. VERY VERY good. Very dark for an IPA, lots of hops.
I hope they can bring this out as a full-time brew.

Sounds awesome!! Hopefully they'll wizen up and bottle some and send it to Philly..where we all know it will move!

To everyone who wondered where else they might get this beer: from the brewery (Erika Schermerhorn, actually, a very nice press connection person) comes this: "The Patriot Homebrew IPA is available only at Gillette Stadium, on tap at the Samuel Adams Brewpub."