The Session #18 -- Memories and Promises 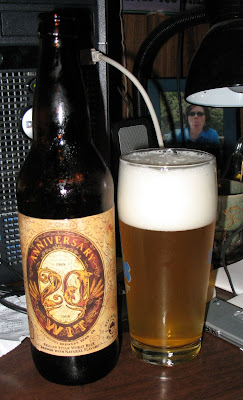 It's The Session, beer blogging on a common topic, and this month it's "beer anniversaries." See all the links soon here at The Barley Blog.

I lived in California too early, and left much too early. I was working as a librarian for the Army at Ft. Ord (outside Monterey; it's a community college now, I think) in the late 1980s, and enjoying the hell out of the growing beer scene. We had the Penny Farthing Tavern (which is apparently still around), which was good for some Young's taps (used to love Ramrod in those days; there was Cooper's Ale and Stout and fresh-bottled Anchor at my local supermarket, and I made pretty regular trips to Front Street Pub in Santa Cruz (which is not still around, dammit), where I first wrote down my thoughts about beer. My buddy Bobby Gryce came out to visit, and we made it to Sierra Nevada (back in their first location), to SF Brewing, Walnut Creek/Devil Mountain, Triple Rock, Acme/Xcelsior (anyone remember that?), to Mendocino's brewpub, and the thoroughly horrible Monterey Brewing Co., which maintained a reputation as possibly the worst brewpub ever in the U.S. (at least, until Gettysbrew came along). Overall, a wonderful time for a guy really waking up to beer.

But I got itchy; the West Coast was just not for me, and I applied for jobs back East. Nothing happened, so I started planning another trip with my buddy Ray Lutz, up the coast to Seattle, following the footsteps of William Least Heat Moon from an article he wrote for The Atlantic in November of 1987 called "A Glass of Handmade." (If you've never read this piece, read it now (and thanks to Wes Jones for making it available); I'll wait...) I had it all planned out, as only I plan out things; I get a bit obsessive when I plot a beer trip. We were going to Redhook, we were going to Yakima, we were going to get some beer!

What I got...was the job I'd applied for; a computer librarian slot at the Walter Reed Army Institute of Research in DC. It was a plum position, a two-level raise, working in a favorite town of mine, getting back East on the Army's dime. And even though the job turned out to be a nightmare -- long story -- it still got me back East. I wonder to this day how my life changed then, and I regret it still that I never got to take that trip in May of 1988.

But you know, I still would have missed Deschutes, which didn't open till July 27 of 1988. It's that long ago that all this happened. Which is why today, for The Session, I'm drinking their 20th Anniversary Wit and thinking about that long, winding road that's led me here. Once a librarian, "backed up against the ocean, backed up against the wall, out there on the edge of America, desperate, and heading for some kind of fall...", then finding myself unemployed just as I'd sold my first piece of beer writing, keeping it together as I honed my craft, and now an apparently respected part of the industry. It's been hard work, and a lot of fun, and precarious at times...which I think Gary Fish would say mirrors his twenty years at Deschutes.

The beer? An excellent companion for reflection. Flavorful, yet not distractingly so; crisp, but not bland; spicy (with grains of paradise as well as the traditional coriander and orange) but not sickly; just the ticket for reminiscing on a warm afternoon. Cheers, everyone; happy Session.
Posted by Lew Bryson at 12:55

Email ThisBlogThis!Share to TwitterShare to FacebookShare to Pinterest
Labels: Deschutes, The Session, witbier

Fort Ord is now California State University -- Monterey Bay. Folks from the University of California system might jokingly refer to the CSU system as "community college," but that's it. CSU folks can be touchy about UC folks...

I first went to the Triple Rock in 1988 while working at Cal. Such was my ignorance at the time that I didn't realize brewpubs were few and far between. I really liked their stout. I drank a lot of Anchor Steam at other establishments as well.

Now to turn 180 degrees... Miller has suspended the three "craft-style" Lite brews. The cool thing about this is that yesterday, the website for the Chicago Tribune ran the web equivalent of "top-of-the-fold" story of Bells Brewing returning to Chicago, and in the web equivalent of "legal notice"-size print, they mentioned that MillerCoors was pulling craft Lite.

That's really funny. You were in California in the 80s, yet missed Anchor Brewing's superb Steam, Porter, and Liberty, as well as New Albion? Must not have cared about finding good beet. I found Steam in 1971.
Oh, and by the way, the worst brewpub of all time was the Redding Brewery, in Redding, California, where a tapper of Bud Light was kept hidden from patrons behind a curtain, and was reserved for the owners.....and no doubt tasted better than the crap they brewed, which was as bad as the Saxon Brewing.

Lighten up, and read the post: "...there was Cooper's Ale and Stout and fresh-bottled Anchor at my local supermarket." Had plenty of draft, too. As for the worst brewpub...you know what they say about opinions!