So, anyway, as I said, yesterday we slowly woke up (after a couple amusing/disturbing dreams I had about beer writers) and I took Cathy out on a walk down along Front Street. We passed the Hockey Hall of Fame and then got to our first destination, the wonderful St. Lawrence Market. As before, the market was almost overwhelmingly appealing, and terribly disappointing...in that we couldn't do anything with this bounty of fresh fish, beautifully fresh sausages, and the stunning array of vegetables, because we didn't have a kitchen!

I thoroughly envy the people in the area for this rich source of healthy eats-preparation...but we made do by getting a peameal sammich from the Carousel Bakery, and lord above, was it hot, juicy, and porkificently great. ("Peameal" is "Canadian bacon"... which is like explaining that DeuS is "beer.") I also got plenty of Kozlik's mustards (three jars of the Russians) and a pricey but excellent pack of "Indian candy": maple-cured salmon. 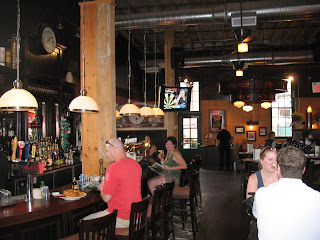 After we stopped drooling, we set out down to the Distillery district, grabbing a cup of joe at Second Cup on the way...and promptly hit Balzac's in the Distillery for more. Then it was down to Mill Street Brewery for some beer -- finally! I got an IPA that was ... hmmm, a moment and I'll come back to it; Cathy got a small Wit ("A halfwit," I chuckled/she groaned). Enjoyable atmosphere though the service was a bit slow, and the space is great: high ceilings, glass, nice fittings. The beer, though, was dull-edged, more bitter than hoppy, and just...lacking in the verve that I expect from an IPA. More about this shortly.

But for now, we had to run: Amy and John Hansell were coming in at the airport, and I'd volunteered to run out and pick them up. That was a hellride: it started pissing down rain about the time we called down to whistle up the Passat, and didn't let up. The Gardiner Expressway was slow and nasty from the heavy rain, and then it started frickin' hailing, stuff the size of small marbles! Sheesh. Things cleared up nicely, though, and soon we had them on-board, and headed back to Mill Street.

Sorry to say it was disappointing. The beer didn't get a lot better, though my Cobblestone Stout was pretty damned good, and the Coffee Porter was well done. But the Stock Ale -- sweet, and that's about it -- IPA -- "like homebrew," John said -- and ESB -- not very much differentiated from the IPA -- were ho-hummers. Kind of made me think of what I speculated about Canadian brewing after Mondiale: behind the curve. Food was only so-so too, though the service was quite a bit better this time.


We toddled about the Distillery a bit more, then I drove us back to the hotel, and we went up to the room, read a bit, got dressed up, and went out to Steve and Maggie Beaumont's wedding party. Which is why we were in Toronto. We had a good time, everyone did. And now we're getting ready to go out again, on Saturday morning. Not sure where we'll wind up, but there's a big get-together dinner planned for this evening at beerbistro...which is nice. 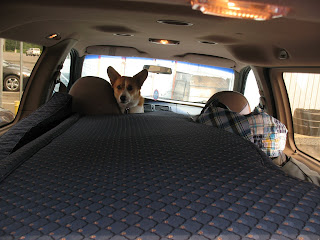 (Oh! I forgot to mention that we actually drove up to the Rochester area on Wednesday to drop off the kids with my wife's family, and to hand over our couch to my bro-in-law -- we just got a new one. On the way up, the serpentine belt broke on the minivan, and we limped into Binghamton. We stuffed everything into the Passat and kept rolling; the van's fixed and we're picking it up tomorrow. As you can see, the damage to the van probably resulted from letting Penderyn drive. Corgis are notoriously hard on cars.)
Posted by Lew Bryson at 08:16

The St Lawrence Market is so cool. I don't recall the name of the place where I got a peameal bacon sandwich, but I definitely recall eating it. It's just one of those great regional treats, like a Primanti Bros sandwich in Pittsburgh, or a steak in Philly. Can't wait to have one again.

The Mill Street beers didn't blow me away but it was still a cool place that I'll definitely go back to next time I'm there.

There are a few places that have the peameal; I agree with Steve B. that Carousel is the place to get them. Yum. I missed mine today -- long story, but no regrets -- but I'll be back. Pretty much totally in agreement on Mill Street.

We spent a weekend in Toronto a few weeks ago. Did you make it to Steam Whistle Brewing? Nice place and I thought they made a pretty damn good pilsner, especially when it's free! (They're VERY generous with the free samples there!).

Had to swing in to Hamilton and spend an evening at the Winking Judge. You turned me on to this place a few years ago, and I've returned many times since. Love that place!

Wanted to get to Steam Whistle, but it just didn't come together...which is the same sad story as me wanting to stop at the Judge on the way up. We DID stop at Pizza Plant in Buffalo and have pods and some nicely kept 60 Minute, though, so all wasn't lost.

Spending a day off work catching up on a couple of weeks worth of email and blog reading, and wanted to say that I was sorry that I didn't get a chance to meet up with you and the rest of the visiting writers and ne'er do wells the other week. I just missed meeting Jay Brooks at beerbistro on the Friday when he stopped by with Steve to pick up some beer for the party, and exchanged some email with him the next day, but I was too busy to meet up.

Nice to hear that you had a generally good time, and I must humbly agree with you that a good portion of the Ontario/Canadian brewing scene is lagging behind the US. Lots of reasons for it, but there are some breweries out there that are starting to make up for lost time...

Bummer, Greg! Worst part is, we obviously had spare time, and it would have been good to meet you. We were just overly focused, I think...not that that's a bad thing when you're in town for a wedding.