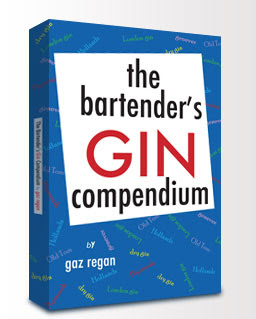 One of the people in Louisville with John and I this past weekend was Gary Regan. Gary's a good friend, and a wonderful story-teller, a nice guy and a great champion of cocktails and the folks who make them. We had a very good time with him Saturday night at the bar at Proof, as he bantered with the bartenders there (and ogled, openly, one of the very nice ladies behind the bar; it's an odd part of his charm).

Gary gave John and I each a copy of his new book, The bartender's GIN compendium (that's a link to buy the book, only available on-line...I think), which, you'll note in the picture to the left, is attributed to "gaz regan." "Gaz," he explained, is the nickname of practically everyone in the UK named "Gary," and his friends there all call him Gaz. We, he said, could call him that, or continue to call him Gary, whichever we were comfortable with. Gary, then.

Anyway, I don't know nearly enough about gin, so I started reading the book when I woke up way too early on Sunday morning, continued to read it in the airport and on the flight home, and just finished it. It took me back 30 years to when I was just starting to drink and wanted to learn everything about booze...which eventually left me with some odd bits of knowledge about pisco and advocaat, a desire for cocktails no one then seemed to know how to make -- I certainly couldn't, and still can't, to my shame -- and the decision that what I really liked to drink was beer, so I'd just learn about that. (And thanks to Michael Jackson and a lot of other good people, I did, and then John Hansell came along and I learned about whiskey, too.)

GIN brought back that fascination, that sense that there was so much out there that was possible to enjoy. I learned a lot about gin, and what a great time to do it. Gin is resurgent, much like my beloved whiskeys. Much was made of the ascendency of "white spirits" like vodka, white rum, and gin over the past 40 years, but gin was the weak sister of the bunch, overshadowed by the others. If my wife hadn't been such a summer devotee of gin and tonics, I'd never have seen gin at all. My mother claims to be allergic to the stuff, getting a pounding headache after only a drink or two of it, so I assumed I'd be the same, and never gave it a chance.

Now gin's exploding -- in a small way -- in a new profusion of brands that tweak the definition. There are distilleries small and large making new gins, older gins -- Plymouth, Old Tom, and genever -- are getting more attention and new iterations, and of course, bartenders -- cocktailians, as Gary says -- are making lots more of both classic gin cocktails and new inventions. The time seemed right for a book.

What about the book? It runs the history of gin, borrowing from other sources -- at times you get the feeling that David Wondrich just didn't have time to write a gin book, so Gary did it for him; though with those two as thick as thieves, it's hard to separate the ideas at times -- then into descriptions of the major botanicals, and then into the meat of the book: descriptions of dry gins, Plymouth gin, Old Toms, and genevers, followed by a thick sheaf of excellent cocktail recipes and mixing suggestions.

The descriptions may be problematic for some. Gary relied on the distillers to write most of this. At first I wasn't that comfortable with this, particularly since the distillers sponsored the book, to the tune of payments for the inclusion of logos and bottle-shots. But...I mean, we know this because Gary tells us so, right up front, including what distillers paid for and supplied, and what they didn't. He did, after all, self-publish the book, and so he's kind of in the position of being the editor and publisher: are magazines that accept advertising independent or not? I decided that being forewarned -- and Gary certainly forewarns you! -- was forearmed, and took all of that with a grain of salt.

That said, I like having the distillers talk about their gins, particularly when Gary invites them to "Tell us why you think your gin stands apart from all the others" and asks if there are "Any other idiosyncrasies that you'd like to tell us about?" Some marketonic stuff, but also some very interesting details and perspectives, too.

Bitch, bitch, bitch. It was never enough to keep me from enjoying this book a lot, partly thanks to something I haven't even gotten to mentioning yet: Gary's voice. He's young and old, self-deprecating and full of great stories about great times, making clever asides that he doesn't even bother to parenthesize. The 'recipe' for Gin and Tonic, for example: "I seem to have lost the recipe for this one, so I'm hoping you'll be able to figure it out for yourself. If memory serves it works well with a wedge of lime as a garnish." Yes, indeed.

Add a lot of great gin quotes from literature -- which helps to hammer home just what a place gin has in English-speaking literature -- and some razzle-dazzle, and the regulations for what gin is, and an appreciated cocked snook at vodka... you'll understand why I advise you to buy this book and start drinking gin.
Posted by Lew Bryson at 12:25

Fritz Maytag has Junipeo. Bluecoat is made in NE Philly! But the kookiest of all is Hendrick's. Rose petals? Cucumber? Delightful.

"Gary gave John and I each a copy"

Lew, are you criticizing Gary's grammar?!

You know it's supposed to be "gave John and me each a copy", right? Because you would say "Gary gave me" not "gave I a copy". That was one of my dad's biggest pet peeves.
Anyway, thanks for the more frequent postings.

start drinking gin? I keep 2 or 3 different bottles within easy reach at all times, depending on my mood.

Dont need no "it's the latest thing" popularity buzz to enlighten me to what I should be enjoying!

I only hope they dont bastardize it too much while they are out "discovering" it.

They're all in there, Pete!

Good God. You know...there's just something about the Internet that drives one to misspell words in posts complaining about spelling, and... Thanks. I'll leave it, as penance.

RJ, Gary and Co. are too reverent to bastardize gin, believe me. And if you don't need a buzz to get you drinking gin, how about you try to get more people drinking it!

well it seems we have all been here before. Last time we talked about geneever I brought up its eastern cousin Borovicka have you had a chance to try it yet Lew?

Will do, as soon as I get more people exercising, volunteering, voting, getting vaccinated, becoming active in local politics and eating their vegetables.

Now, I'm off to invest heavily in olive futures...

Bluecoat was the first gin I enjoyed straight up.

yeah it is hard to find. Well next time you venutre West of the alleghenies let us know and I will draw you a dram over at the Kollar Club in the South Side on Jane Street

Next month, jp, just a few weeks from now, I'll be out. Keep it back of the bar!

Gin...the OTHER white spirit! And the only one worth drinking, in my book. Agreed on the Bluecoat thing. Great stuff. For an everyday G&T, though, it's Booth's for me. Cheap, tasty, and 90 proof!

Hendricks is very interesting and delightful, but another great one is Magellan.

Dogfish Head also has a very nice gin as well. As for Bluecoat, its wonderful by itself, the only gin I can drink straight.

As for the headaches you mention, I found that the cheaper the gin, the more likely a headache, or generally icky feeling. Makes me wonder about the processing or lack thereof.

borovicka is the essence of gin. I keep a couple bottles here in Harrisburg that european relatives have brought. Great stuff.

Agree with Sam K, I dont bother with Vodka, only gin, and dont do "mixed" drinks anymore, just cocktails.