"The Report of my Death was an Exaggeration"* 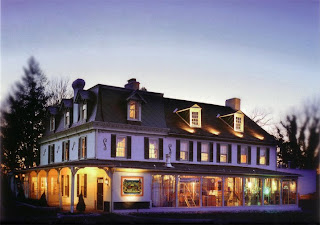 Back in July, a bunch of us in the "Philly Beer Community" got an e-mail from Chris Leonard, owner-brewer of the General Lafayette Inn: things were not good, really not good, and he was putting together a last-ditch plan to rescue the place. Uncle Jack, bless his heart, posted it on his blog. I...did not. I meant to, but apparently I was paving the road to Hell that week, got busy (July was a thin month 'round here), and by the time I had time to do it, well, the moment had passed. I felt bad, and finally got my guts up last week and said something to Chris about it by way of an apology.

'No worries,' he said (I'm paraphrasing), 'things are better, and I'll send you an update.' He has, and here it is, in Chris's truly inimitable style.

Rumors of my demise have been greatly exaggerated. Just ask my mother-in-law. Much to her chagrin, The General Lafayette Inn soldiers on with renewed vigor, promise, and excitement for the season that lies ahead. Despite rumors that the General is up for sheriff sale (NOT true) and that we are “out of business” (hardly), we are very much in the early stages of a mini-renaissance, if you will, at the old Inn and Brewery.

Are things easy? Of course not. But nothing worth earning ever is. I was fortunate enough to welcome some new blood on the ownership side of things here. It has helped energize us. That, along with an entire new menu concept (mussels, flatbreads, pretzels, incredible burgers, all house made – simple, fresh, and delicious), has opened up some new opportunities here. Heck, we even have digital HD television now.

Look for us to expand our bar area into our (mostly) empty dining room, creating a warm, comforting, atmosphere with booths, tvs, and, hopefully, a second bar. Hard wood floors are the next addition and we hope to see more folks returning for casual meals, great beer, and good times. Damn, this sounds like a commercial. [Yes...] So, I’ll wrap it up.

I just wanted everyone to know that I’m not going anywhere anytime soon. After many phone calls, I finally got a return call from a woman who had paid a deposit to host her rehearsal dinner here tomorrow night. We had not heard from her and needed her menu. She told me, “We were under the impression that you were going out of business, so we found another place.”

Well, you can imagine how deflating that can be. True, I brought these rumors on myself by making a public request for help. Well, we did get some. Now, I must quash the backlash of that unconventional approach and get this thing back on track.

If the Phillies hold up their end [and they have, and they are!], we’ll have Philadelphia Philsner [which Chris described as "the first red pilsner." What's a red pilsner, I asked. I don't know either, he replied, but we're making one!] on tap in time for the NLCS. Fugazi Lager is pouring now, with Octoberfest on-deck. The Phils are battling and so are we. Please don’t think we’ve given up and are anything but going strong!

And that's the news from Lafayette Hill. Good news, because I'd truly hate to lose the General: the historic spot (the building dates from 1741), the closeness to my daughter's school (awfully convenient), and Chris and Russ Czajka's excellent, award-winning beers. So...come on out and support your local brewpubs -- yes, all of them -- but if you usually overlook the General, or you're pissed about something that happened to you there five years ago, make a special effort. It's really too great a potential treasure to lose.

*Before any of you jump on it, this is the original Twain quote, not "Reports of my death are greatly exaggerated." You can see an image of the hand-written original here. For every Wikipedia screw-up, the Internet brings us a correction to years of misinformation. Well...maybe for every 50 Wiki-screw-ups...and yes, obviously, reports of the death of Seen Through A Glass were an exaggeration as well. I've been gone for a week, a very busy week, but I'm back, and I may even post to the PLCB and Session Beer Project blogs. And San Francisco WhiskyFest is this Friday, so...fun, fun, fun!
Posted by Lew Bryson at 10:03

I think I screwed up by cancelling my visit to PA. Not that I would have been there in time to see the Dodgers crush your dreams, but still...

I thoroughly enjoyed this!

I wish there were places like the General Lafayette Inn around here. maybe there are and I'm just missing out.

"Are things easy? Of course not. But nothing worth earning ever is." --quite memorable.

I moved to the Hill aread 4 years ago and fell in love with the Gen Laf then. I really hope Chris continues to make efforts to improve, as over that time period the food side of things REALLY fell off. It should be such a great restaurant and hopefully he gets back to that. We haven't gone for dinner in quite a while (still hit up the bar for drinks).

Also, if you read here Chris, not to sound old, but the bands in the bar are often way too loud. (God I sound like my father). It's really cool to have bands there, and I've actually seen a few I really enjoyed, but a 5 piece rock band doesn't work in that space. Just something to keep in mind.