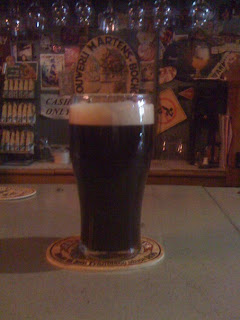 I've been doing the drinko in San Francisco since we arrived in town for WhiskyFest on Wednesday afternoon. (The six-hour flight was just barely tolerable...thanks to my new 3 oz. flask! Nothing like some bourbon on ice to ease the tedium and put a new perspective on how much six hours in a toothpaste tube sucks.) We landed about 1:30, and shortly after that John Hansell got on the phone to call David Keene, the owner of Toronado, about meeting us for a beer at the bar. Hey, David says, I'm just 15 minutes away, I'll come pick you up. And he did, in a monster Ford F-150 Platinum.

There was an odd moment; we had to get gas, and pulled into a station...and there were motorcycle cops all over, and two huge, plainly bullet-proof limos, a couple Suburbans with weird antennae on the roofs, and what sure as hell looked like a bomb disposal truck...all with Maryland or DC plates. Strange vibes, and we got the gas and got out. I didn't take any pictures. (Sure enough, we found out the next day, Obama was to be in town, and we'd filled up with his convoy.)

So Toronado was having a little fresh hop beer fest, and David started pouring beers. First one was Speakeasy's Big Daddy, and the fresh hops put the aroma over the top. Next was Port Brewing High Tide, which did not blow me away; not a lot of aroma on this one. We took a break and ran next door to Rosamunde's for sausage; I got the Merguez with onions and mustard, very good, solidly meaty. Then I took a break from IPA and got the glass of English Ales Black Prince Porter (cask) you see above. Very nice, chocolatey, good condition, and I enjoyed it quite a bit. 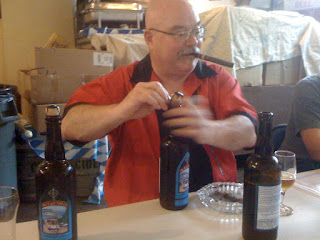 Then we adjourned to the back room, where we got another round of fresh hop -- Dempsey's 707, which was quite lively, dry, had a bit of a dandelion wine character -- and David started getting out the crazy stuff. We were soon drinking three vintages of Port Brewing Cable Car, the Toronado beer that makes beer geeks pee themselves. Distinctly different; the 2007 vintage was now quite soft, the 2008 had some creaminess and sharper funk going on, and the 2009 was strikingly more carbonated, with strong citrus notes. John couldn't help himself; he started blending, and soon came up with a blend that was more than the sum of its parts. We got some Sierra Nevada Estate at this point: delish, better than the bottle I'd had earlier in the week. Draft was more aromatic. 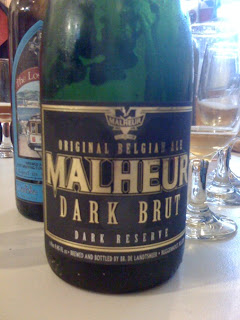 More craziness: a bottle of Russian River's Toronado XX anniversary beer. This damned beer had it all going on: chocolate, tartness, cherry, a twist of smoke, a beer that really rewarded contemplation. The room got a bit quieter as we drank it. Then someone said they wanted something dark and not sour, more sweet. David got up and left the table, and we just kept drinking...next thing we know he's back with a bottle of Malheur Dark Brut. Delicious stuff, first time I'd had the dark. "Wow," I posted to Facebook, "Good and fizzy and sweet and complexity. Cheers!" Indeed.

Yes, "complexity." We were getting a bit buzzed by this time, and decided to take a break. We dropped in on two "Whisky Week" events at Alembic (where we ran into the very cheerful and pleasant David Perkins of High West, and I had some rye whiskey drink with a cucumber garnish) and Elixir, showing the Malt Advocate flag, as it were. And then we went and had dinner at a new place David Keene is partner in, the π Bar.

Okay, it's actually the Pi Bar, but I wanted to show off. Pi Bar is simple: pizzas, salads, a little pasta (I got the pasta bolognese, and liked it), and good beer and wine. And it was all good. the anchovies were a high point: locally cured, fleshy, mild, delicious. I got a glass of Deschutes Black Butte (cuz I could, which I can't at home) and then Moonlight Death & Taxes, a black lager with some roasty dark malt authority. I took to the Death and Taxes rather strongly.

When we broke up to head back to the hotel, I texted my friend Steve Jackson, who lives in SF, and asked him if he wanted to meet me at Zeitgeist. Sure, so I walked down Velencia 1.5 miles and walked into the place...and got carded! Yeah! Really! It was great. No Steve yet, so I grabbed another Death & Taxes and waited for him. We got caught up (had a Drake's Porter, too) and had some laughs, but it was getting late. I said good-bye, and walked another 1.5 miles down Mission to the hotel.

A good day. Thursday would be a good day too. More soon.
Posted by Lew Bryson at 10:22

Sounds like fun, Lew. Next year come on out to Oregon for the real fresh-hops action!

Livin' large, buddy! Thanks for taking us along for the virtual ride. Enjoy tonight's WFSF action!