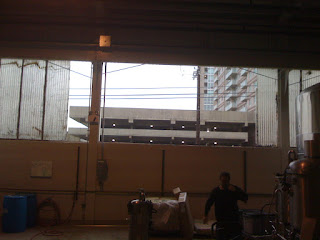 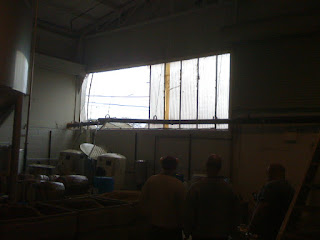 I was down at Yards about 11 AM today, getting ready to interview Tom Kehoe and Steve Mashington for PA Breweries 4, when there was a hell of a noise that stopped conversation dead in its tracks. It sounded like a gigantic animal screaming, a horrifying sound. We all looked to the brewery -- well, "we", Tom and Mash were already gone, running down the stairs. We would later agree that our first thought had been that a tank had somehow collapsed.

But it was two windows that had blown out. These are the windows around the brewery walls, about eight feet high: two sections blew out, one about 12 feet, the other about 18. The local storm was about at its peak at the time (it had almost wrenched the car door out of my hand when I arrived), and we figured it blew in the window you see in the second picture (the glass was inside), and then the shift in pressure as the wind then blew into the brewery blew the second window out. There was an icestorm of glass on the back street behind the brewery...but no one was rushing to clean it up, because the window next to it was bowed out at the bottom. 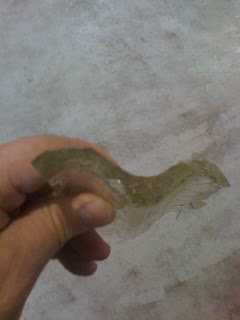 I had thought these "windows" were rippled plexi, but as you can see in the third picture, they're glass, almost half an inch thick, and wire-mesh reinforced ("The most brutal glass I've ever seen," Tom said, recalling when they had to cut a hole in one of them).

But there was almost no slack in work. The bottling plant on the other side of the building continued to clatter along. Guys grabbed palletjacks and moved some barrels and kegs that were getting rained on, and calls were made to insurers and contractors and "glass guys"... And a soaking wet Mashington sat me down at the bar (of the new tasting area, very nice, very casual), and said, "Let's do the interview." So we did. Life -- and beer -- goes on.