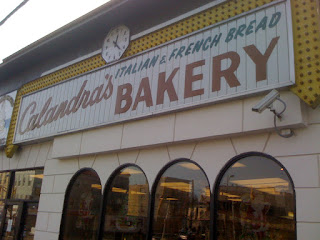 I've told you about the annual busman's holiday* I do -- The Hunt -- and this year it fell to just Les Gibbs and me. We decided to do something completely different, and headed out -- after a leisurely cup of coffee and a split bottle of Flying Fish Imperial Espresso Porter -- for New Jersey. As you can see by the picture, our first stop wasn't even beer-related, but more about "laying in a base": Calandra's Bakery in Newark, which was, to use a simile that came easily to our Berks County Hunt-trained minds, kind of like a Dietrich's Meats of bread.

It was crazy delicious stuff. We got four loaves of bread, a dozen canoli (which I dutifully took home in their cardboard box lovingly tied with red-and-white string, and of which eight were gone before I even got a shot at them, my family are pigs!), and some eat-on-the-spot goodies: a custard tart for me and and some pignoli sweet bun for Les. The French baguette was still steaming when I ripped it open in the car, gawd, it was good!

From there, we struggled with traffic to the excellent Helmer's Cafe in Hoboken, and managed to find parking pretty quickly. I got some Krusovice Cerne (a dark lager the bartender seemed to think was a spiced holiday beer; I liked it) and sausage-stuffed mushrooms; Les joined me on the Cerne and got a slice of leberkäse, a first for him that he decided was very much to his liking, especially with the German mustard that was served with it. We had a good time, but decided to move on; I could have stayed there for a while.


We struggled with traffic to the Star Bar in Jersey City, only to find that it didn't open till later. Okay...I was about done with the metro area traffic, so we aimed the Passat for Montclair and Tierney's. I found Tierney's when I was working on New Jersey Breweries, and I'd been hankering to go back again. It was a bustling day, the bartender was handling the whole place on his own (and trying to get a late lunch), but he did get us our drinks (I went light with a Guinness, Les had a Cricket Hill American Ale). Tierney's is solid and true, and we hated to leave. 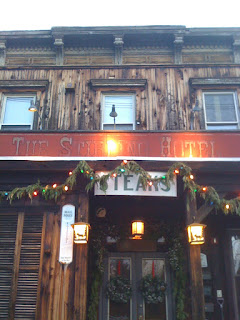 But The Hunt is about moving on, so we headed out for the Stirling Hotel. It was hopping, at least in the bar, and we managed to snag one stool out at the far end. Great taps, good bottles, and I grabbed a Stoudt's Winter, and then went to drinking water. Very knowledgeable staff here, one of the reasons I wanted to return, and this time I got to meet more of the patrons. We had a great time (although the kids who piled into the table behind us were kind of a pain), and I'd be happy to go back again.

Onward! It was getting nasty wicked cold by now, in the low 20s and a whistling wind. When we pulled into the parking lot in front of the Warrenside Tavern, I was ready to sit and warm up for a bit...er, and hit the head. I left Les at the bar and went to see a man about a dog. On my way back, I walked by the cooler in the back. The Warrenside's taps hadn't impressed me before, but the bottle selection was pretty damned good. Wow, no longer: huge open spaces in the cooler!

I did spot some Fuller's Porter, though, so that's what I ordered. When the bartender brought it, I asked her: is the beer supply low, or are you cutting back? Cutting back, she said, there's a recession on. Too bad; almost every other bar I know of (like Helmer's, and the Stirling...) has found that craft beers have been the thing that people keep buying. But hey, I'm not a bar owner! It was a nice place to warm up, and the Porter tasted good. But it did hone my hankering for English beer, which made up my mind for the next, last stop...

The Ship Inn was doing a pretty good business, families, folks at the bar. We got glasses of Best Bitter, and tucked into dinner: Shepherd's Pie for Les, a Lancashire Cheese and Onion pie for me, solid and tasty. We ate, we drank, we talked...and then drove home, laughing and talking some more. It was a very good day.

* the link's to an Urban Dictionary definition that -- gasp! -- includes no sex, scatology, repetition, racism, homophobia, or repetition -- will wonders never cease?

Next time you're in Jersey City stop by the Lighthorse Tavern or Zeppelin Hall Beer Garden for a good beer selection.

Thanks, Tom: if the traffic hadn't been so damned knotty, I'd have given Zeppelin a shot.

It was wonderful to see you down at Stirling! You are welcome anytime, stay longer though!

Hey, Dustin! Good times, I'd have loved to stay longer.

Light Horse has an excellent beer selection and the food is very good. That said, the place is a bit upper crusty - white tablecloths and all. The Iron Monkey is only a couple of blocks away and they have a nice beer selection and a more down to earth character.

You probably should have substituted Circa in High Bridge for the Warrenside.

The Ship Inn is one of my favorites. I don't get there nearly as often as I would like - darn work, wife and kids put a damper on the beer excursions!