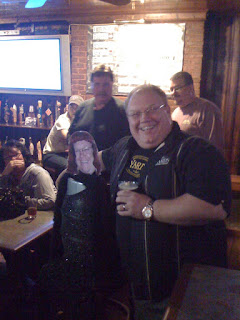 I hadn't had enough Yards Old Bart New Year's Eve at Dawson Street. But I didn't really want to drive the whole way into Philly again...

Luckily I had another option: Tuesday night, Old Bart Day 6, featured a firkin of the stuff at the Hulmeville Inn, which is cool, the hangout of a bunch of buddies, and ridiculously close to my home. So I rolled down the hill, and found the usual suspects, plus two Yards bigshots, Steve Mashington and Tom Kehoe. And yes, that's a picture of Tom, with a firkin that has a picture of Tom's head attached...along with a wig and a black cape of sorts, and thereby hangs a tale.

The Hulmeville has a reputation for swarming firkins and draining them in short order. No way that's happening with 10+% Old Bart, says Kehoe! Oh, yeah, it will, says owner Jeff Lavin. By the time the trash-talking was done, a wager was made. If the firkin took more than 45 minutes to drain, Jeff would put all of Yards beers on tap at once, an all-Yards week. But if it took less than that, Kehoe would "dance with the firkin."

No suspense: it took 31 minutes (and I helped!), including the three pints of yeasty mung some brave souls took to help the cause ("Don't get far from the men's room after that," I overheard (Jeff had a reserve pin of Old Bart, and replaced their beer smoothies, no charge)). Kehoe was one hell of a sport: he danced with the firkin, first to "The Time of My Life" and then, quite appropriately, to "Dancin' With Myself."

The beer was great, again. "We're gonna have to bottle this next year," Mash said to me. Well, yeah! And make more of it, too! Enjoy the dance...

Only been to the Hulmeville once; great time. Looks like this was a fun time to go too. As for the dance, I couldn't quite tell, though, who was leading!