A Little Fun in Philly 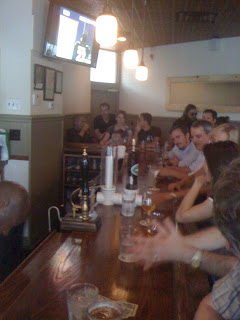 I rolled down to Philadelphia yesterday evening for two fun things. First, I went to Resurrection Alehouse for their one-year anniversary. As noted earlier, it's been a busy year, what with raids and national praise of their fried chicken, but the celebration was typically low-key. Brendan Hartranft greeted me with a pint of Bombardier (that dry, slightly hair-tonic English malt character kept the interest up through the glass), and indulged me with a look at the new Randall the Enamel Animal V.3.0, the fabled beer infuser that Sam Calagione keeps messing with.

The new iteration (filled with JW Lees-infused prunes...) retains that picked-from-a-plumbing-warehouse look: that is PVC pipe at the base, and that's some kind of clear plastic thing on the right...you can just make out the prunes in there (and they were all swoll' up with the Lees, too; tasty-looking). It wasn't going to get hooked up until 8 PM, for a 'simul-tap' with 8 other bars; Sam, Sam, Sam, you are nuts and we love ya.

Anyway, I was going to leave, but I didn't. I talked myself into having a pint of Victory Festbier since it was now officially Fall, and didn't it just taste grand? A tray of mussel skewers came around -- brilliantly fresh and zesty with lemon -- and I talked to Leigh Maida and Valentine Bandit, Leigh and Brendan's beautiful little boy. Things are good at Resurrection: good vibe, good beers, good food. Nice neighborhood, too; hope the South Street Bridge re-opens before Valentine graduates from high school...

I had to run up to London Grill then. See, when I went to Beer Camp at Sierra Nevada back in April with all the Philly beervolk that went, we got to brew a beer, and Terry McNally, who owns London Grill, was agitating for an almond beer (Chico grows a lot of almonds). Pshaw, we said (and other things), and steamrollered her. Didn't the very next Beer Camp brew an almond märzen? And didn't Terry get a keg?! Yes, she did, and it went on last night, along with Tumbler, XXX, our own ExPorter, and the perpetual SNPA tap, it was a Sierra Nevada lovefest. The beer? Not much nut character; none, really. Terry happily agreed that the ExPorter was better. But Tumbler was great, a dry brown ale with a nice bitter pull at the end. Good stuff.

And then I went back to Newtown, and went to choir practice. It was a good night, especially when the thunderstorms hit during practice!
Posted by Lew Bryson at 08:31

You got to brew a beet at beer camp?

Well, go back and tell us how the damned JW-Lees-prune thing tasted, s'il vous plait......

Just curious about the choir, Lew. What type of singing?

must've just missed you last night. Left just after 9pm. Like you, I enjoyed the Marzen, really enjoyed the Tumbler (yet again, on this my third try), and had a quick sip of the sneaky "Jack and Ken's"