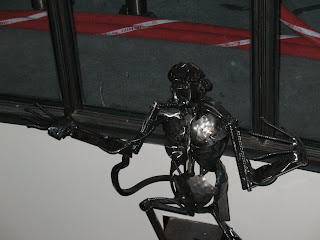 Tuesday April 17th saw a beautiful moment at Triumph Center City Philly, and I'm not talking about the screaming metal monkey to the left. The brewers of the three Triumph brewpubs -- Princeton, New Hope, the new Center City spot, and 'executive brewer' Jay Misson -- held a brewers reception, inviting brewers from the region to come to the newly opened brewpub. It was a nice idea, and it was great to see everyone come out. 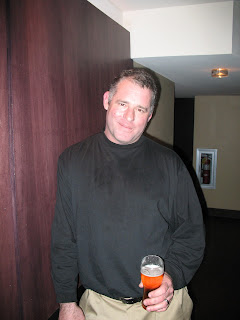 Brewers came from as far away as Troegs and Appalachian in Harrisburg, Stewart's in Delaware, and Anheuser-Busch in Newark, NJ. (Really: these guys are all in the Master Brewers Association of America, and Jay's just become the president of the local chapter -- see how happy he is in the picture to the left? -- and everyone came out for their colleague's new operation.)

As you can see, Jay, like me, spent most of the evening drinking Patrick Jones's excellent kellerbier. It rocked as only an unfiltered pils can rock: aromatic, a touch sulfury, and utterly refreshing, the lager equivalent of cask ale. I also tried the dunkel (which, honestly, I thought needed a bit of work; it was a little sharp, not as glass-smooth as I like a dunkel to be), the porter (very nice beer, hoppy but not obtrusive with it), and the Chico pale ale (yup: Cascades, clean, good drinker, no issues here).

Had good chats with Scott and Lee from Legacy, Casey and Robin from Flying Fish (hadn't seen her in a couple years, nice to get caught up), Brugger from Troegs, Whitney from Appalachian (good to meet the new brewer; very pleasant young woman with a microbiology 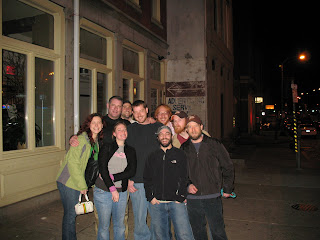 background, love to see that from a brewer), Suzanne from Sly Fox, Ric from Stewart's, the King of the Philadelphia Craft Beer Scene (don't worry, folks, we shook hands, and smiled, and I went across the street to Eulogy afterwards and had a nice glass of draft Allagash Curieux), and with Triumph partner/founder Adam Rechnitz (who pointed out the screaming metal monkey to me).

I know I'm missing people, and I apologize. It's so infrequent that all of the beer folks in the area get together in a non-work setting that isn't after an exhausting day at a fest. You see how much everyone enjoyed it in this picture out on the street afterwards. Get yourself down to Triumph; the parking's not as bad as you might think (well...on Friday and Saturday nights, but take SEPTA!), I parked on-street for a buck, only three blocks away, and the walk did me good. Thanks to Triumph and Jay Misson for this very gracious "hello" to the craft beer scene.
Posted by Lew Bryson at 00:10

What is it about beards and beer? Why do they go together so well?

We're a breed apart, Stonch; gotta expect that it will overlap in other areas. Most of the people I know who are passionate about beer are at least a little 'square peg in round hole'-like. Me, I'm bearded, I'm a long-time science fiction fan, and I drive a diesel sedan (my second; had one back in the 80s). Not hugely different, but different. And happy with that!

Is the "no growlers" thing a city ordinance or what? And if so are they (along with Nodding Head) going to try and fight it? If so...before August would rock. Or I'll just take the family to New Hope.

I will, however, WOOHOO! another Triumph location.

The "no growlers" thing is apparently a Philly thing. I'm working on a PLCB application myself, and item #8 on the retail license app. states: "If the restaurant or retail [...] license will be located in Philadelphia, do you intend to sell malt and/or brewed beverages for off-premises consumption? If yes, you must submit the city's approval of your request in the form of a resolution or ordinance with your application."

Next time you're in the area of Triumph, come around the corner and check out national mechanics They are, sadly, lacking any Belgian style brews which you seem to enjoy, but they do have a great selection besides. I'd love to hear your opinion of the selection, food, place, etc. Cheers!

Matt,
I'd love to stop in, always interested in a new place. Thanks for the tip. The beer selection listed on the website's not bad, but not real stand-out either. It would be great if there were some beers other than "the usual suspects."