I hosted a beer dinner and beer fest in Erie last weekend, and it was a big success. But to host it, I had to get there, which is why I drove across Pennsylvania on Friday, April 20; "4-20 Day," as Woody Chandler reminded me. It's also Woody's street number, and it's also Hitler's birthday. Really. I just happen to know that.

Who's Woody Chandler? Woody's one of the folks who picked up my mid-Atlantic column at Ale Street News. He's a character, a guy who wears a braided beard and black horn-rims, wears monks' robes to beer festivals, but a guy who is as honest as the day is long. So I offered him a ride to Erie. We rolled the Passat across the state, up to Harrisburg, the 322 route to Lewistown and then up to I-80 for an invigorating 140 miles before hanging a right onto I-79. 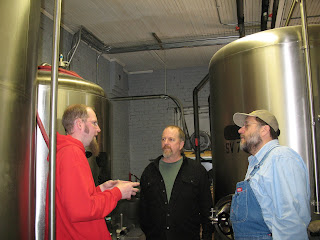 Then we got off at Meadville to stop in to see Matt Allyn at Voodoo Brewery. Matt's been working on Voodoo for a while, and he's finally getting close to opening, hopes for next month. He's brewed some test batches -- necessary to season and passivate the steel brewing tanks, an old German brewing tradition -- and Woody and I were happy to help him empty the tanks.

We were joined by Tim Bowser, seen in the picture to the left between Matt (in the red) and myself (in the overalls). Tim's working on opening a brewpub himself, Elk Creek in Millheim, PA. He was pleased to tell me that he'd landed a brewer for the pub -- not open news yet, apparently (tell me if I'm wrong, Tim!), but I know the guy and his beer, and Tim's done quite well getting him to move to Millheim.
What about that passivating beer? Pilzilla is a big (6-ish%) unfiltered kellerbier with a whopping hop nose that is not overpoweringly bitter. Wynona's Big Brown Ale was a hefty, powerfully flavorful, rich brown ale, with a hint of Scotch ale raunch to it. The Four Seasons IPA will change with the season (duh...); this one was big, dizzy with hops, and slippery-drinkable with balance. The White Magick of the Sun wit was tasty, zingy with Matt's blend of spices and peels (which includes 14 different peppercorns). But the killer was the Gran Met Trippel, brewed with a yeast from a small (unnamed) abbey brewery in Belgium that Matt says he got from Pierre Celis. He trains up the yeast by slowly adding cane and beet sugar to the fermenting beer, and the flavor is phenomenal: bright and spicy up front, orange smoothness in the middle, and then a remarkable creamy sensation on the finish. Quite a beer. 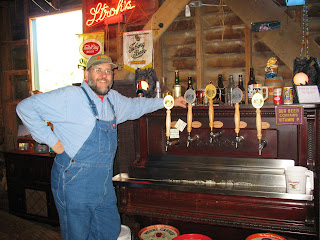 We thanked Matt and took off up the road to Sprague Farm & Brew Works in Venango, Tim following close behind us. As you can see, Brian and Minnie are still serving their beers from an old upright piano. I grabbed a Hellbender porter (my favorite at last year's opening) and followed a tour, mostly the Chisholm family (whose kids are pictured in the earlier post here, and who were also at Voodoo beforehand -- gotta love people who are so devoted they tour breweries before they're open!). The Ale Mary wit's still a briskly spiced delight, too. It sounds like things are going well at Sprague; the beer sure tasted fine, and I bought a growler of Hellbender to go. 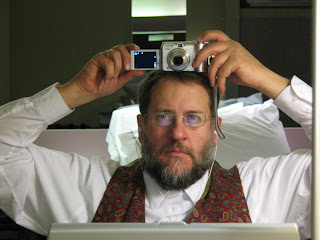 We got back in the Passat and headed up the road to Erie, pausing only to check in at my motel to change for the dinner. I wore a close approximation of what I wore for the Pennsylvania Breweries taping: paisley vest, white shirt, dark gray pants. Kinda like this picture, only without the camera on my head.
On into Erie to the train station: BrewErie at Union Station was the site for tonight's dinner and the festival the following day. We settled in at the bar, and I got a sampler of all the beers so I'd know what I was talking about. All ales, that's what brewer Gary Burleigh does, mostly: blonde, nut brown, amber, porter, hefe, and IPA.
I took right to the porter, and that's really the source of my only complaint: there didn't seem to be enough differentiation between the porter and the nut brown. Both good, but not different enough. Well, the IPA was also under-hopped, but Gary'd already told me that; he was still dialing in the brewing system. "First IPA was way over-hopped," he said, "this one I over-corrected. Next one should be good."
That's when I met Mary. As she explained it later, she got there early for the dinner, and her friend Dorothy had told her I was the beer guy, so she didn't have anything better to do than strike up a conversation.
She told me she was a big fan of the pub beers, and that six months ago she'd been drinking Labatt's (Heh; Dorothy would tell me later that Mary was actually drinking Labatt Blue Light). 'And now?' I asked her. "Can't drink it anymore," she said with a grin. "Just doesn't taste like anything."
We talked more, and when Dorothy and more friends showed up we talked beer even more, and it turned out that Dorothy was the assistant park manager at Presque Isle State Park. Really? Really, she said, do you want to see the sunset from the lighthouse? Hell yeah! We'll get you up there, she said. Cool. 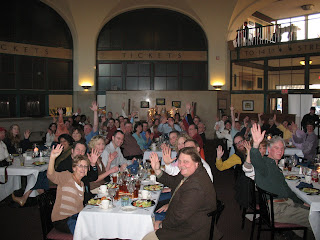 Then it was time for dinner. I was introduced by BrewErie owner Chris Sirianni and Erie public TV station WQLN's Tom New, the guy who put together the Pennsylvania Breweries show and, apparently, was one of the major movers behind the beer festival. I talked to the crowd about the growing acceptance of craft beer and about beer and food.
"It's acceptable and smart to talk about beer and food these days," I said. "Beer and food, pairings, what goes with what. I don't think that's half as important as the idea that beer is food. You put it in your mouth, it is nutritious, it needs to be kept fresh. Once you start to think of beer as food -- roasted grains, spiced with hops, flavored with fruits and herbs, and made with yeast just like bread -- beer with food is obvious. It goes with food like dressing on a salad, like sauce on meat or vegetables."
Totally off the cuff, but it sure made sense to me as I said it, and a number of people thanked me for the insight. Hey, bonus! We got tucked into dinner: a fine garden salad with baby beets, a buffet of chicken with brown ale sauce, roasted spuds, green beans, and prime rib, and that beer dinner classic, beeramisu. All quite tasty, and I continued to annoy the diners throughout. We hung around for a while afterward, having one last porter and signing a few books. Then I dropped Woody off at his CouchSurfing stop and headed out to the motel for the night.
Posted by Lew Bryson at 09:25

That piano draft system is amazing. And gotta love the Stroh's sign pimping too.

I met Woody at the ABC fest in Harrisburg in September of '05; great guy. And I still have his business card with the outline of a football on it. It says: John S. "Woody" Chandler, Pittsburgh Sports Fan, Movie Buff.

Thanks for filling us in on the event, sounds like a good one so far!

Loren, the piano is all a part of the whole Sprague vibe. It takes me back ten or fifteen years ago, love it!

Bill, Woody's a trip. Great guy to take a trip with, too.

Eli, great fest for a first time, Erie did well. Worth the trip just to see so many western PA/NY breweries together (Ellicottville and Red Star and Southern Tier were there, too).