Cathy and I flew out to Chicago on Thursday to work WhiskyFest Chicago, part of being on the Malt Advocate team. We got a quick run into downtown from O'Hare, checked in, and saw a load of whiskey folks while we are the front desk: Kris Comstock of Buffalo Trace (I asked him if Sazerac prez Mark Brown had been embarrassed by the cover article I wrote on him and the distillery in the current issue; yes, he was! Mark's a real team guy, staying in the background, but his story was so darned compelling that he wound up being the anchor of the piece), Julian and Preston Van Winkle, Elmer T. Lee (Buffalo Trace distiller emeritus and just a real nice fella), and Richard Paterson, master blender at The Dalmore. Good people, and we'd be seeing more of them shortly, but right now we wanted to get a drink!

So we ran up to our rooms, dumped our stuff, freshened up a bit, and grabbed two cabs. It was me, Cathy, John Hansell, and the husbands of our current and former office managers: Jim McGinley and Jamie Fox. We were headed for the Clark Street Ale House, our favorite, never-miss stop in Chicago. Except we're here once a year or so, 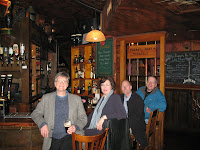 and we're not completely clear on where it is ("It's easy," I told Cathy, "you go over to Clark Street, turn right, and walk till you get there."), so we wound up giving the cab drivers directions to Fado.

What? Hey, we're dopes, but we're adaptable dopes. "Guys," I said, "This is not a problem. I just happen to have here a $25 gift card for Fado that I got for Christmas. Let me stand you a round of Guinness!" And that's just what we did. Good jar, too. 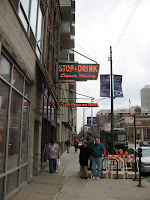 Then we went to Clark Street. They were just opening, and Erin, the bartender, wiped things down, set out fresh pretzel rods, and took our orders. John and I, as we almost always do, got pints off the handpump, which was an exceptionally delicious barrel of 3 Floyds Pride & Joy Mild. I'll tell you, it was superb. If anything, it was only flawed by being maybe too exuberantly hoppy...but we were of a mind to forgive it that tiny flaw. Damned nice beer. Cathy got a Great Lakes Ed Fitz Porter, always a good choice. Second round: I got the Two Brothers French Country Ale, a solidly malty ale with a nice dry edge to it. A favorite when we're here.

Then we headed to Binny's for their pre-WhiskyFest tasting. Wow. I had two great tastes of Laphroaig, the Quarter Cask (breathtakingly peaty, but bright and lively, fresh air whisky) and the 30 Year Old (classy, smooth, still peaty but mellow with it). I got a quick hit of Canadian Club Classic 12 Year Old (sweet, but not mawkish with it, a nice whisky), some Stranahan's (still not doing it for me), two Caol Ila's (a 12 year old that was quite lively, and a 25 that was just delicious), a Ledaig (had to try it cuz I just learned how to pronounce it: "Leh check"), and a Bruichladdich (wurf, peat, malt, some fruit, nice whole). I was busy.

We were in need of some refreshment, and the Duke of Perth was right down the street, so...off we went. I got a Harviestoun Bitter & Twisted IPA (fruity, bitter, fresh, real drinkable) and Cathy got a Summit Maibock. 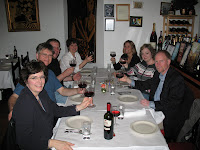 We would have stayed, but we had dinner reservations for Maza, a Lebanese restaurant across from Delilah's. Wow, was it ever good. We let the owner, Joe, talk us into "a feast!" and he was so right. Maza, he told us, means something like 'tapas,' and he just kept bringing more little plates out: baskets of fresh pita (still warm), hummus, tabbouleh, kibbeh, roasted eggplant, chicken with couscous, shrimp with couscous, lamb/beef sausages (grilled all up and delish), and kebabs. Plenty of Lebanese red wine (a very nice cab/syrah blend) and Almaza Lebanese beer. Dessert was cashew baklavah and orange rice pudding, with coffee spiced with cardamom. We were stuffed and happy, what a fantastic meal. 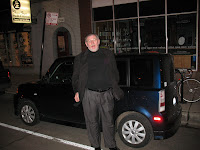 recommendation to go to Maza. That's where we were joined by regular Malt Advocate writer and Chicago native Terry Sullivan. We had one beer, then Sullivan packed me into his little Scion boxmobile (see below; surprisingly comfortable, even on Sullivan's 6'4" frame, and as he said, "If I ever run out of work, I can always deliver bread") and we whipped off to the Old Town Ale House, one of his favorite bars, and had one more beer before I begged for mercy and went back to the hotel. And that was Thursday. More later about the Fest.
Posted by Lew Bryson at 14:32

So, what will it take to hang with you and your peeps the next time you're in town? ;-)

I've been to each of the places you mention, except Maza, but it sounds like you had much more fun than I!

P.S., I won't tell Stonch you were drinking Guinness...

Lew! When I grow up I wanna be you! Just one question: Why didn't ya hit the Map Room!?

Okay, to answer all of you in order:

You can hang with us when you work for the mag or marry someone who does (you can hang with me if you can follow the loud laughter and trail of empty glasses). Maza is worth checking out.

When there are so many great places in Chicago, you've only got so much time to get to new...no, wait, we went to Fado. Um...Clark Street is within walking...no, wait, we took a cab there. Um...I wasn't in charge! That's it, deny responsibility!

And Stonch...the only excuse I have is that it was Guinness or Smithwick's, and I just didn't feel like Smithwick's.

Well, since I'm already engaged to a lovely girl who doesn't work for the magazine, and we aren't living in Utah, where do I get an application? ;-D

And I'm pretty good at following laughter and empty glass trails, but I'd rather be a part of the party than a chaser!