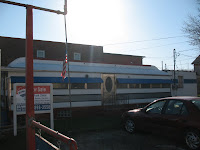 My Erie Weekend: Part II (Part I is here).

I got up Saturday morning (April 21) hankering for a dinor breakfast (that's how "diner" is traditionally spelled in Erie; apparently no one is really sure why), and although I have a couple favorites, I'm always looking for something new. I fired up the Web and found the Lawrence Park Dinor, an authentic Silk City diner (Silk City made the "railroad car" diners; there are some modern diners named Silk City -- not the same thing): game on!

It was a long, somewhat complicated way off, so I MapQuested directions and a map, and took non-flash digicam pix of both screens with my new camera (a Canon A630, a bigger camera with more battery power and more comfort for my big hands, I'm very happy with the pictures I'm getting now): brilliant idea, worked like a charm, and after a 15 minute drive in the early morning sunshine, I pulled up in front of the beautifully maintained Silk City you see above. It's so damned authentic that it's on the National Register of Historic Places. How many of those serve breakfast?

I got a seat at the counter, right by the grill, where the owner, George Gourlias, was frying eggs and potatoes, slapping down the ham, and turning bacon. Gawd, it was tremendous. Coffee came quick and hot, and when I saw "Greek Sauce Omelette" on the menu, I knew it was for me.

Greek sauce is a puree of ground beef and spices similar to Coney Island sauce, usually put on hot dogs, often called "Texas Hots" or "Texas Wieners." Greek sauce is found all across New York State, from Brooklyn to Plattsburgh to Buffalo, but it's also all across Pennsylvania, from Philly to Scranton to Erie. When I was doing the research for the latest Pennsylvania Breweries, I found a very early reference to Greek sauce in Kane, Pa., up in the northwest corner, possibly pre-dating the Coney Island use usually given as the first (George said it was invented at Coney Island, for example).

George did his omelette French-style: a light cake of eggs, still moist, and tri-folded, with the Greek sauce ladled generously over the top. Great sauce, spicy but not overdone, and I tore into it. George has the place for sale; he's been there for 15 years, I think he said, has another restaurant on the west side of Erie, and is looking to open something different. He's certainly got a good business to sell: the Park was busy, friendly, and smelling great.

I finished breakfast, drove around a bit, then went back to the room and did some writing. About 11:00 I called Woody, arranged to meet him at the Maritime Museum, where he was touring the brig Niagara, Pennsylvania's flagship. Woody's retired Navy, and was fired up by the idea of the three-week sailing school course offered by the Museum. I picked him up and we headed for the brewpub for the fest. 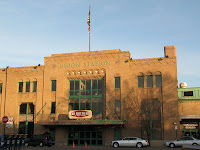 You can see the 1920s public architecture influence on Union Station in this shot: it's a grand building, and the restoration inside makes BrewErie a great place to host a fest (although I'm afraid the carpet's going to need a cleaning; lotta spilled beer). I was signing books and working the crowd; saw plenty of old friends and tasted some great beers. Penn's Weizenbock was a great pour, as was the rye beer from North Country and a surprisingly huge and delicious barleywine from Hereford & Hops.

The three-hour sessions were a good idea, no one got out of hand. Actually, for a first-time fest, it was extremely well-run. The only problem I noted was that the crowd was allowed to linger after the first session was over. With only an hour between sessions, people were hustling to re-set for the second session, and the brewers didn't get much of a break. Lessons learned. On the other hand, it was good to have the second session done at 8:00: plenty of evening yet to enjoy! 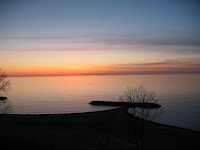 Speaking of which...about 7:20, Mary showed up at my table. Did I still want to go out to the lighthouse? You bet! We made arrangements, and by 8 I was following Dorothy's Honda SUV out onto Presque Isle to the lighthouse, where she lives in the attached brick building. I offered up a growler of Brian Sprague's Hellbender Porter (rapidly accepted and poured into shaker glasses), and we made the ascent up 76 spiral steps to the top. You can see the view to the left. It was awesome. We were about 70 feet above ground level.

About this time we were joined by two more of Dorothy and Mary's friends (sorry, ladies, I should've written your names down!), one of whom was from Bucks County. We talked home ("Oh, no, that's been torn down. Nope, sold. Oh, yeah, used to be there, but they closed.") as the 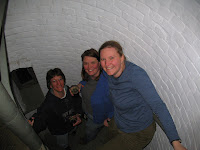 sunset slowly faded, and then the timber doodles came out. I had read in A Sand County Almanac about the way woodcocks fly up in the twilight and then spiral downwards, crying out as they dropped, but I'd never seen it. Woodcocks spiraled down around the lighthouse, and I was enthralled. What a great moment. But we had to go down, it was getting dark. You can see the steps as we descended in the picture: that's Dorothy on the left and the two later-arriving friends to the right.

Afterwards, Dorothy and Mary and I finished off the porter and talked beer for a while, then I finally headed back. The park was closed, but Dorothy told me how to get out past the gates. I saw deer and coons as I drove slowly down the isle (it's not actually an island, but has been in the past at times). I grabbed some dinner, picked up Woody, and headed back to the brewpub, which I've already told you about here. And that was pretty much Saturday. Just a bit more happened on Sunday. Coming up soon.
Posted by Lew Bryson at 06:33

Who ees thees "Woody" fellow that you keep mentioning?

Oh, a hitchhiker I picked up. Just kept drinking coffee, swearing, and making me stop at McDonald's.

I used to go to a place in Kane with my grandfathers that they called Texas Hots. Do you have any more info about that early Kane reference?

Steven,
Your friend is absolutely right. I've et Greek dogs (no matter what they're called) all over NY and PA, and they're the best. I've winkled one of the secret recipes out of the locals, and make it for summer picnics. It's like spiedies in Binghamton; once you've had 'em, you've gotta have more.

That's the place. Their website (http://mysite.verizon.net/vze1p9ih/index.html) makes the 1914 claim, which is the same year claimed for Todoroff's Original Coney Island Chili Sauce. That's Todoroff's in Jackson, Michigan. "Coney Islands" were originally just hot dogs, the Coney Island SAUCE came later, and apparently does NOT come from Coney Island. Interestingly, the hot dog with Greek sauce in Plattsburgh, NY, is called a 'michigan,' but no one in that town seems to know exactly why. God, do we ever need more food historians.
Me, I want to get to Todoroff's and see what their sauce is like.

I want you to do a fast food of the NE state blog. Wudja?

You'd better be careful how you use the term "fast food" around here, son. Them's fighting words. Perhaps what you meant was "road food," or "diner food." Right?

"Fast food", "watery beer" - are you sure there isn't a bigger language difference between Canucks and Yanks that we assumed?

I don't like road food because a lot of it is hometown stuff. Syracusians like their own salt potatoes and Endicotians like spiedies. And diner is a sub-set. But I take your point that the homestyle cooking of each community is a far stretch from the megaco strip at the edge of town.

Lew, your penchant for a good dog requires my referring you to the Squeeze-In in Sunbury. It's a ten-foot wide restaurant with stools for five patrons (hence the name) and a walk-up window on the street that's been there since the forties. Cute as all get out, and the dogs are excellent. A real piece of obscure Americana you can visit the next time you go to Selin's Grove!

Sam, I like the sound of the Squeeze-In already. Thanks for the tip.

NOTHING in Erie is "long and somewhat complicated"!