WhiskyFest Chicago is a lot of work. Here's how it happens. It's 3:00 Friday afternoon. We're in the ballroom at the Hyatt with John and Amy Hansell (John's the publisher/editor of Malt Advocate, Amy's the general manager and the person who really runs the actual mechanics of WhiskyFest), Kathy Fox and Joan McGinley (past and present office managers for the mag, who know all the people and who goes where and how to make WhiskyFest run), and Kathy and Joan's husbands, Jamie and Jim (who pitch in and very competently do whatever has to be done).

The prep work for WhiskyFest is months-long, and done by Amy, John, and Joan. I make a couple suggestions, but mostly, I come in at the last minute. My job at WhiskyFest is running the seminar rooms. We have to make sure they're set-up and ready to go on time, that the distillers know where they are, that we know where the distillers are (and what they look like; it's an ever-changing roster), that we have all the AV needs covered, and that the distillers have all their stuff from the hotel shipping area. And, of course, we have to handle all the last-minute changes: this room needs 5 glasses, not 4; these guys decided they do want an LCD projector package after all; oh, we do have tasting mats, could we just slip them under the glasses?

Seriously, it's a lot of work, and a certain amount of confusion, but the Hyatt -- like the Marriott in NYC -- has gotten quite good at it over the years and the staff doesn't even bat an eye anymore at these requests. We thought we had an advantage this year: NexTel walkie-talkie phones we rented for four staffers (plus three extras for each ongoing seminar to call in any problems -- like guests who had over-Fested). But after a 20 minute training session we realized that there was no way that we could show the seminar speakers (or their assistants, really) how to work the things in 30 seconds, and after half an hour, we realized that the things flat-out sucked for what we wanted to do: you could not set them to ring loud and long for an incoming alert, which we absolutely needed in the din of WhiskyFest. Which was too bad, because the reception was great, unlike our cell-phones. Grrrr....

The Hyatt staff did a great job this year, and we were set up in the 7:00 seminar rooms before the Fest even started at 5:30. Then the adjustments started: find the presenters, shake hands, see if they're okay, if they need anything (not usually), if they have tasting mats (paper mats to put the different glasses of whisky on, usually with notes to tell the guests what they're tasting), that kind of thing. 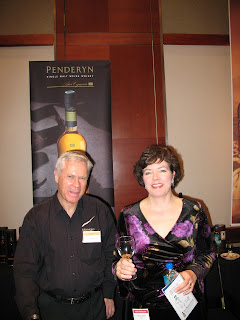 I also cruise the main hall of the festival, making sure no one's getting in ahead of time (exhibitors or guests; we don't want anyone getting in the way of the people who are setting up), answering questions, and checking to make sure no one's putting posters or display materials up on the walls or the curtain dividers. That's one of our rules, for a two-fold reason. We don't want any inadvertant damages to the hotel's walls or curtains, and we also like to keep a level playing field between the big and little distillers, as much as possible. We don't let anyone pour in front of the table for the same reason, along with cutting down on the congestion that would inevitably create.

This is also an opportunity for me to say hi to friends and folks I know...and to get a picture of Cathy with Dr. James Swan, the creator of Penderyn, our little dog's namesake. We each had a quick taste as well: "A light, pleasant drinking whisky," as James said; very pleasant stuff.

At 5:20, John takes the podium and welcomes the exhibitors to WhiskyFest. He goes over the rules -- 1/4 oz. pours, no pouring in front of the table, no free bottles to anyone (full or empty, Illinois law forbids it), no serving drunks -- and reminds them that all the rules are in their best interests. Then the doors open for the first part of the Fest: VIP ticket holders, press, and Malt Advocate Whisky Society members get in an hour early for the first crack at things in a less-crowded setting. We check to make sure things are running smoothly, then duck out to run the seminar rooms again.

At 6:30 the doors open wide and the steaming hordes eagerly rush in, smiles on their faces. About 15 minutes later, I'll take the mike to make my first announcement of the available seminars ("Good evening, Chicago! Welcome to WhiskyFest!!" Always met by roars and applause, that one), hit it again at five before the hour, and then run off to the seminar rooms to make an request to the guests that they respect the speaker, each other, and the whisky...and to have fun. We had no problems with drunks at Chicago this year: thank you, Chicago.

A wee bit of drama this year: Lincoln Henderson, the scheduled speaker for Suntory's 7:00 seminar ("Yamazaki Time"), is running late from the airport. At 7:05 I stick my head in and ask the Suntory rep how things are. He gives me a tight smile: "5 minute video running. 45 minute seminar." The smile broadens and he shrugs. I go looking for John; as he says himself as soon as I tell him what's going on, he's probably the second-most qualified guy at the Fest to do the presentation. We go over to the room, but Suntory's American rep is at the mike and doing fine. Whew. Lincoln did finally arrive at 7:30, he took over, and we let them run a bit long.

"Running a bit long" is an issue. The first seminars end at 7:45, at which point we have to get the guests and presenters out of the rooms as quickly as possible so the hotel staff can clear the tables of glassware, tasting mats, and...stuff (replacing tablecloths if necessary), put down the new mats and glasses and...stuff, and let the distillers quickly pour as many as six samples, all of which Cathy and I have helped with at one time or another. So we like to have the first seminars clear out as close to 7:45 as is polite. Some run long, and it can get a bit snarky, but we always get it done. Two seminars started five minutes late this year, but the guests were very good about it, and even applauded the announcement.

A word about that. This was possibly the smoothest, best WhiskyFest ever. We had very few problems with "over-enjoyment," which were handled with smooth cordiality by hotel security. The food was excellent and plentiful (the braised short ribs were delicious, as was the Mediterranean cheese and vegetable selection), the floor was not as congested as it's been in the past, and the room didn't seem to get as wicked hot as it does sometimes (you put a bunch of people in a room and give 'em whisky, it's gonna get hot). And of course, there's that wonderful smell. "I like this event," said Deb, the hospitality manager for the hotel. "It smells like whisky." Yes, indeed!

Finally, it was over. I got a couple drams myself (some Caol Ila independent bottlings, the mysterious Templeton Rye, George T. Stagg, Van Winkle 15, some more Penderyn, and a few sips of the Old Pulteney range. Then I headed over to the beer corner for a wet-down with Goose Island Matilda and a variety of Unibroues. Ah, refreshment. Goose Island brewer Greg Hall did a seminar this year, a first: barrel-aged beers. Very well received, I heard. 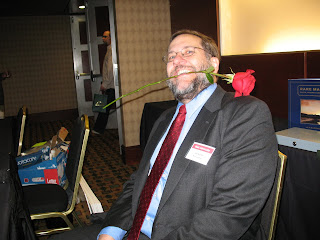 Last call, and we relaxed as everyone filed out. A well-behaved crowd, as Chicago usually is. As you can see by the picture, we got a bit silly. Then we went to Clark Street Ale House and got even sillier. John bought a huge stack of delicious pizzas, and we ran a tab for about two hours. I was disappointed to learn that other people had found that cask Pride & Joy wonderful too, and it was gone. But I was real happy to learn that it had been replaced by Two Brothers Cane & Ebel Rye, a thoroughly delicious and drinkable beer that I stayed with all night.

We were joined at Clark Street by Derek Hancock of Gordon & MacPhail and Brett Pontoni of Binny's (and probably some other people, to be honest, but I was focused on Cathy, the Malt Advocate staff, and the beer). Two more Malt Advocate folks joined us at Clark Street: Steve Beaumont, our long-time Taste columnist and well-known drinks writer (who was there with his charming and fun girlfriend, Maggie), and Sam Komlenic, our new copyeditor, who some of you may remember as the other guy who got thrown out of the bar in Wilkes-Barre with me after The Lion's 100th anniversary. Sam's also the guy who sent me the pictures of the fire at Schnitzel's Tavern in Bellefonte.

We drank, we walked back to the hotel (about half an hour, but I needed it). Cathy and I spent another day in Chicago: another morning walk, the Field Museum (great little Tibet exhibit, and we saw a Maori troupe perform in front of the Maori longhouse they have: fantastic). 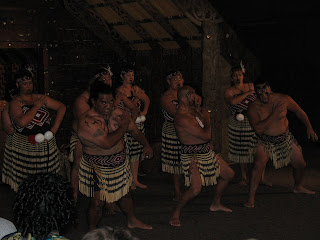 Then we met with our Chicago friends George & Sue Sarmiento (George was Cathy's boss back in the 1980s, and just a hell of a great guy) for drinks at Kirkwoods (one of the many nice little corner bars in Chicago, and some decent drafts, too), then went to Resi's Bierstube for dinner. Great half-liters of Hofbräu (exceptionally good, great body, clean and not overwhelming) and Spaten Maibock, and a delish plate of leberkäse, with a nice chunky portion of potato salad to go with. After that hearty meal, we went out to a jazz club with Kathy and Jamie (Honkers Ale and Maker's Mark Manhattans)...and finally called it a night and a weekend. We had an uneventful flight home, despite the nasty weather, and were re-united with our kids and little dog. A really nice trip.
Posted by Lew Bryson at 08:50

Isn't the food that comes from Resi's tiny (and I mean *tiny*) little kitchen just amazing?

Seriously, come back in the better weather and I'll share a 1/2 liter with you in the Biergarten - it's wunderbar!

The food was great: the leberkäse was equal to or better than any I've ever had in Germany. And if I do come back...I'm having more than one half-liter in the Biergarten!

If you bring your own Maß they'll let you use it in the Garten!

But don't worry about over-stuffing the overhead, I've got an extra you can borrow!

RESI'S BIERSTUBE!!?? I like it! Maybe that's what I'll start calling my backyard beer events!!
Looks like another great 'fest you had there!

that sounds like a hell of a good weekend! i'm off to whiskyfest san francisco tonight-- thanks for the cool post!