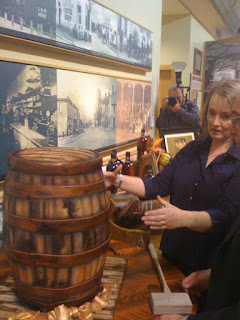 I'm currently in Louisville, on a beautiful fall day. I'm out here with John Hansell, Gary Regan, and other whiskey writers to help celebrate Parker Beam's 50 years of working at Heaven Hill.

We went down to Bardstown last night in a limo -- nine of us, passing around a bottle of Parker's Golden Anniversary, and it was fun, and Larry Kass told some great stories, and we all agreed that what gets said in the limo stays in the limo (and believe me, that's for the best!) -- and toasted Parker with a bunch of Heaven Hill folks, other distillers (at one point I was drinking with Jim Rutledge (Four Roses), Greg Davis (Tom Moore), and Craig Beam (Parker's son and co-master distiller), and Bardstown friends. Parker was called "a Rembrandt," "a genius," "brilliant," and I have to say, he was honest enough to simply smile and nod. Lots of laughs, and lots and lots of great bourbon. That's Bourbon Heritage Center director Lynne Grant with the cake, BTW...really, that's the cake. It even has the stencil on the head. Awesome. 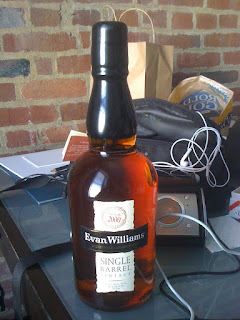 Tonight is more Parkermania: the launch of this year's Evan Williams Single Barrel Vintage. I just had a bottle delivered to my room, and I'm not opening it. I'm waiting till the official launch. That's how it's done.

And because that's how it's done: I am Heaven Hill's guest on this trip. Because you should know that.
Posted by Lew Bryson at 16:14

Thanks for the full disclosure. And Jim says, touché.