Who said you can't have great beer and sports? 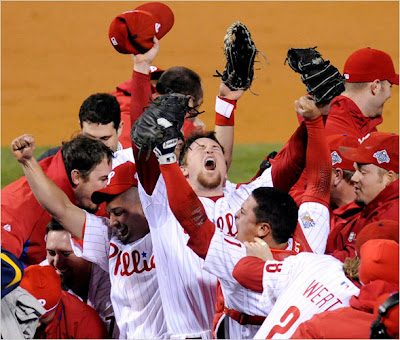 I know two places -- so far -- that have BOTH good screens that will be tuned to the World Series and great craft beer:

Local 44 has installed a "100% more gi-normous TV" and a TV in the dining room for the Series, and will have $3 drafts during all games.

Anyone else with an exceptional TV system and exceptional craft beer, feel free to pile on in the Comments, and we'll never have to suffer through light beer with the Series again. Repeat!
Posted by Lew Bryson at 10:48

Rock Bottom in K OF P. Great beer. Close to 20 TV'S all HI Def and a projection screen that is huge with a great Picture....and tapping the pumpkin ale tonight!!

The Rock Bottom in Des Moines, Iowa is even better. 60 flat screens, 32 of which are located in the men's room.

You gonna watch the Series in Des Moines? Really? Are you a...Yankees fan?

Otto's in State College; the best craft beer between Philly and Pittsburgh, HDTV, and Philly fan Mike behind the bar. Stop by and have fun with a great crowd!

If only they would start serving good beer AT Fenway...

If you are in the Harrisburg area, the Brass Rail in Campbelltown is tapping a keg of Philadelphia Philsner for the start of game 1. They have a few nice flat screens, nothing huge, and the place is small, but the beer selection is great.

Plus lovely lovely ladies who know lots about beer behind the bar. Also, superdry humor from Patrick on Thursdays!

Has anyone been to Coo's Sports Bar on North Broad yet? Looks great and seems to have good draft list.

Looks like Coo's "grand opening" is Saturday. Anyplace that has weekly specials on Sly Fox, Ommegang, and Brawler is okay by me.

How about 3 dollar "Philsners" (a red lager brewed by GL) at the General Lafayette and their newly installed Digital HD tvs?

We just installed a new plasma over at Dock Street, just so folks could watch the series.

And, we're doin' some beer specials...

McMenamin's - will be packed but fun - all plasma TVs.

Fatty's - some good stuff on tap (Avery IPA, Anderson Valley IPA, La Chouffe, Bells Brown plus the usual suspects) - won't be as crowded as McMenamin's, but Fatty just re did all of the TVs in there with nice plasmas. Also they have a huge outdoor plasma on their covered deck.

I went to Local 44 tonight and they took the special off the table, apparently. No "local beer" happy hour extended during the games.

Scoats has pointed out to me that the Grey Lodge has always had the Phils and great craft beer...and of course, he's right (he usually is).

west philly head;
I held off on publishing your comment till I had a response from Leigh at Local 44. I got one tonight, so I let it fly: what it came down to is that there was a breakdown in communication due to Leigh's baby coming early. Once she's figured out what actually happened, she'd like to apologize to you. Until then, as she said, she's got to deal with some poop.