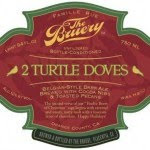 My first beer from The Bruery, the latest "oh my god oh my god oh my god!!!!!" brewery of the geekerie. Small and specialist out of Placentia, California, I admit to wondering why this tiny place's beers are even in the Philly market -- but of course, that's why: it's Philly. 'Nuff said.

Anyway, this was a brewery sample, so after the requisite stalling and chilling and drinking other stuff, I'm getting to it. There's a ring of brown shtuff, like wet tobacco dust, around the bottle-lip when I lever the cap off. Not promising. 2TD pours thick and dark, almost black, and I'm wondering if this is more of The Cult of the Imperial Stout that seems to have taken over the übergeekerie, even more so than DIPA Frenzy.

But it's not that, it's... If a Baltic Porter is a doppelbock gone porter, this is an imperial Belgian stout...if you will, thus successfully combining two frenzy-inducing genres. I don't like it at first -- on the incipient edge of sourness, and the beer's almost too rich, and it doesn't taste like the description -- like "turtles," the choco-caramel-nut candy. Too much fruit for that. Too much, in general, even in a 12% beer.

As it warms, however, some cherry asserts itself, and the beer cleans up. Still big (and I don't get the people who said it hides the alcohol; no 'bad' alcohols, maybe, but clearly a big beer), and still rich, but settling down, getting comfortable with itself. Taken as not just a holiday warmer but as a statement on the lines of Stone's Vertical Epic -- and isn't that a gutsy thing for such a small, young brewery? isnt' it? Or is it? -- it's big enough.

I have another bottle. Gonna make sure more people are around when I open that one.

I still haven't found the 2 Turtle Doves, but the other three Bruery beers I've tried were all very nice. You'll probably have a hard time finding the Autumn Maple this year, but look for it next year. It's pretty much a Belgian version of an imperial pumpkin ale that uses yams instead of pumpkins. A must drink between Halloween and Thanksgiving. My sources tell me the Black Orchard, a black wit, is being retired, but I can't see how it could be because it was probably the most interesting, although not the best, thing I tasted this year. The other one I tried was their Saison de Lente. I won't even go into tasting notes on this one, but it is a must try. They call it a spring beer, but with an Easter egg on the label it is hard to argue that it isn't an Easter beer — and we all know that what we need is a few more Easter beers. This brewery is starting to get into the leagues of Dogfish Head, Jolly Pumpkin and Struise. They even Facebook e-mail fans of their facebook page about events. Their beer isn't for the masses, but the masses we're not. Sorry for the extended comment. I'm just glad to read something local about a brewery that I didn't hear anyone local talking about.

I had their Autumn Maple. That was tremendous.

We went to Capone's to meet the "Bruer" and taste samples of several things. I was an instant fan!

I haven't had 2 Turtle Doves, and can't comment, but would love to add it to the database.

My recollection was about a year ago their Black Orchard became one of these rare and highly regarded beers, up there with the other unicorns. I got my hands on a couple of bottles before they became as easy as they are now to obtain. I found them to be thin, overly carbonated, and having enough variation betwixt them that quality control seemed to be an issue. I had a few of the White Orchards and the problem was only worse, with fairly substantial variation in lavender levels. Later on I had the Saison Rue and de Lente, which I thought were very good beers, well made in the style, but it also suffered from severe over-carbonation.

Anyway, I was curious how this small brewery became so viral. Certainly there was the internet chatter, but that was backed by the distribution. Maybe it is simply that PA can source great beers, but I also saw them in Manhattan and upstate NY, the latter not really a hotzone for rare and hard-to-get beers.

Chocolate, chocolate and more chocolate. A big, delicious dessert beer. I'll be picking up a few more bottles myself.