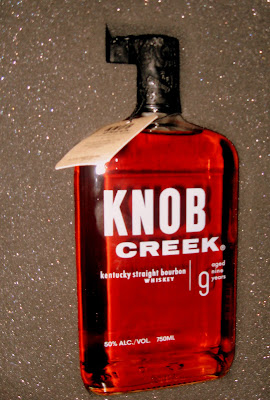 Back in June, I got an empty bottle of Knob Creek in the mail with a message from Beam: Thanks For Nothing. Sorry, they said: we didn't make enough Knob Creek 9 years ago, and, well, we're out. Won't be bottling till November, because we won't compromise on every drop of Knob Creek being 9 years old. And "Thanks For Nothing," meaning Thanks For drinking so much Knob that we have Nothing left. Knob Creek, it seemed, had run dry.

I was nonplussed. They sent me an empty bottle? It seemed silly just to make their marketing point. Wouldn't an e-mail with a picture of a man crying beside an empty bottle have been enough? And just who the hell were they kidding, anyway? They must have seen this coming a year or two ago, although nine years ago they clearly didn't foresee the startling rise in bourbon sales that would take place (and Knob is one of the hot brands): they didn't make enough whiskey. They could have just put Knob on allocation. That's about the only option they had, though, because Knob is the oldest bourbon Beam bottles -- so far -- so they couldn't divert older bourbon to fill out the 9 year old stocks (which would be legal: "9 years old" on the label just means that the youngest whiskey in there is 9 years old).

And...an empty bottle? I was, as I said, nonplussed. So I said nothing. And I waited. And I didn't really see any empty shelves, although I did see a lot of mainstream press coverage (complete with analysts actually saying that this could be bad for the brand...who pays these people?!), and the price of Knob on the shelf went up. Hmmm...

Then a week or so ago, I got a full bottle, a special labeling without the usual paper label, just screened, and with a necker that read: "From spirits distilled in the year 2000 and aged a full 9 years." That's better. A full bottle. That I understand.

So what's this mean? That I only respond to full bottles of whiskey? Well, considering that Knob's one of the whiskeys I actually buy occasionally, no, not really. I've got plenty, and I didn't need more. I'll probably give this one away (maybe for a charity thing, been doing more of that lately). Maybe it's just that empty bottles confuse me?

What it really means is a few things. First, it appears that Beam has such a big pipeline that it takes a while to empty it; there was enough Knob in the system to sustain sales for five months. Second, hats off to Beam for sticking to their age statement, something that's been dropping off a lot of whiskey (and whisky) bottles in the past two or three years as sales out-strip supplies. Beam made more of a noise about running out than anyone else did, because they did make that decision to stick to the age statement. Finally, it looks like all this shortage really did was get Knob Creek plenty of publicity, of the good kind: they spelled the name right, and they got credit for sticking to 9 years. Which they should.

Very informative post Lew! My dad and I have been noticing many brands slowly dropping the age from their labels. You finally gave an explanation for why that is. So if I am understanding correctly, many of those brands that no longer display the age are probably putting younger whiskey on the shelf than in years past? And assuming that's true, than should we assume at some point that age will re-appear on those labels when their supply meets the demand again?

That's kind of a yes-and-no, G420. They're probably putting younger whiskey in there, but it's hard to say how much. There's also the 'calendar' thing to consider: is a barrel of whiskey ready when it's X years old, or when it's ready? And is that for real, or is it rationalization? Hard to say, because it varies.

But yes, I think you might see age statements reappear. It's going to be a while, but someone's going to get enough whiskey in the queue to see a competitive advantage to putting an age statement back on...and away we'll go on the next cycle.

They gave you a full bottle? All I got was t-shirt and a commemorative bung.

Distillers give me whiskey. I can't complain. I do try to share the wealth when I can!

Lew, if you still have that bottle, I know of a very worthy charity here in OKC which would heartily welcome your donation! It would help to warm the spirits of less fortunate (than you) gentlemen who must actually buy their own liquor, and must endure cold evenings in a SHED in order to enjoy a cigar with their bourbon. Won't you please help!? Your donation would mean so much!