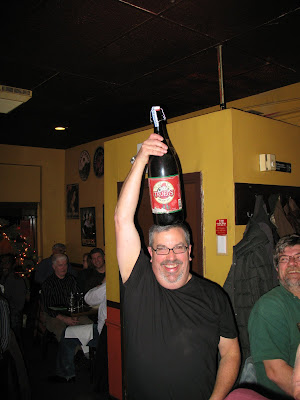 You know there are a lot of perks to this crazy life I lead, but one of the very best is the Christmas dinner at Monk's Cafe. I've been going since before it was at Monk's: Tom Peters started doing these crazy dinners when he was managing Copa, Too!. There's always great beer, and there's always...the Buche de Noel.

Tonight's was no exception. I was at the bar, hobnobbing with UPenn Museum's Bruce Nichols, Uncle Jack, Carolyn Smagalski, and Don "Joe Sixpack" Russell, as well as Home Sweet Homebrew's George and Nancy, and Philly beer historian Rich Wagner. I could wax enthusiastic, but to be truthful, my waxing is waning right now: I'm exhausted. I'll just list the menu.

Jolly Pumpkin Noel de Calabaza with spinach salad with hearts of palm, strawberries, and toasted pine nuts (this one worked well for me, cutting the sour of the beer). 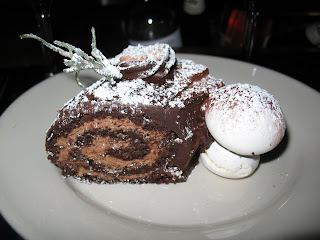 Troegs Mad Elf Jeroboam & Port Brewing Santa's Little Helper with the Buche de Noel. Yum. The Mad Elf was great, the SLH was big and warmingly medicinal. Nice job on both. (That 'mushroom' was delish, BTW)

Particularly poignant, because this was chef Adam Glickman's last night, after steering the kitchen for 9 years. He got a bit choked up, and it's understandable. Great run, Adam. Fantastic food, that did honor to the beer.
Posted by Lew Bryson at 00:36

Happy Holidays Lew, Glad to know about this delightful dinner at Tom's. We will post a Belgian experts link to your blog so more folks can read about the fare. Hoping to see you in the New Year. Cheers! Don & Wendy