“I’m with the Bushmills party.” The Colum Egan Interview, Part I 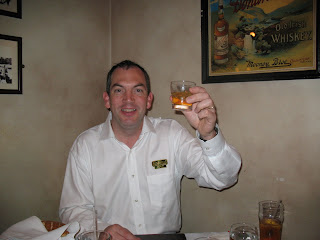 As I mentioned a bit ago, I got an invitation to have lunch with Colum Egan, the master distiller for Bushmills Irish Whiskey. That's him, raising a glass of Bushmills Original at a corner table at Tír na nÓg in Philly (16th & Arch), where we met two weeks ago.

A quick background: Bushmills was recently bought from French booze company Pernod-Ricard by English booze giant Diageo as part of Pernod's hugely complex buy-out of booze company Allied Domecq. Pernod owned both Bushmills and Jameson/Midleton, and sold off Bushmills, much the smaller of the two, to their rival, Diageo.

If that all seems confusing...it pretty much is, and you need a constant newsfeed to keep up with who owns who in the booze field these days. But what it comes down to is that Diageo has decided that Bushmills is a valuable property, and they're revving it up for a serious tilt at the world market. Hence Colum's visit to the U.S. for St. Patrick's week.

It was a beautiful day, not at all presaging the horrible sleety disaster we'd be experiencing just two days later, and I was actually ahead of schedule, arriving in Center City at 11:45 for our noon lunch date. Half an hour later, I had to call my Diageo contact, Laura Peet, to let her know that after having driven fruitlessly through two parking garages only to find no open spaces (I despise this process in Center City; just one more thing Philly has to solve), I was still on the streets.

Yes, mass transit fans, I know that Suburban Station is 20 yards from Tír na nÓg; but if there had been parking available, it would have been 30 minutes from my door to the bar, compared to 80 minutes by choo-choo, and I was jamming on a tight deadline day already. There is no good solution.

Laura called me back in two minutes; the Phoenix Building, where Tír na nÓg is located, has valet parking. I rushed over, stepped down the sidewalk, and entered Tír na nÓg.

“Yes, I’m with the Bushmills party.” What a fine, fine thing to say in an Irish pub!

As mentioned above, Colum was sitting with Laura in the corner in a very busy, happily noisy part of the bar (truth to tell, it was all like that; busy place). I only had 30 minutes to do an hour interview, so we skipped lunch, ordered a round of whiskeys (“What will you have?” asked Colum – first test – and I laughed. “You’re the master distiller: you order, I’ll drink!” He ordered two glasses of Black Bush with a bit of ice), and got right into the interview.

It is quite different. The whole history of Irish whiskey is unique. If you go back even as recent as 120 years ago, there would have been as many as 140 distilleries open in Ireland, making whiskey. Today there are only three. [Since then, just last week, actually, the Kilbeggan distillery began production again…so four distilleries. ] A very short timespan in the history of whiskey-making.

One of the main reasons for that was actually Prohibition. A lot of distilleries in Ireland at the time were independently-owned and quite small, and their biggest market, or perhaps their only market, was the States. Almost overnight, that market was closed to them. Of course, when you’re making whiskey today, you’re putting it in an oak barrel to sell it in another three to five years. A lot of distilleries just stopped making whiskey. Then they were not able to sell, so they didn’t make any money, so they just simply had to close.

Coming up to today, one of my main jobs is to keep that tradition and that heritage going. There’s a little saying there that goes: Bushmills isn’t good because it’s old, it’s old because it’s good. It’s a nice simple way of putting it. We’ve come through a lot of adversity and hard times. Hopefully, at the moment, things seem to be prospering for us after all that time. I like to think that the quality of our whiskey, the taste of our whiskey is contributing a lot to that.

What makes Bushmills whiskey different from other whiskeys of the world is the smoothness of the character. We distill the whiskey three times. When you distill a whiskey three times, you get this lovely, light, fruity whiskey with nice spicy, flowery notes.

So what gives Bushmills its great taste is the triple distillation, but we also put it into these very high-quality oak barrels. I can get a [bourbon] barrel from Kentucky delivered to us at the distillery for about $50 a barrel; if I have to go to Spain [for sherry barrels], it costs me $750 a barrel.

That was one of the questions I had: where are you getting all the sherry barrels? They’re not easy to come by any more, are they?

Some sherry barrels are easy to come by; they’re very low quality! When it comes to Bushmills, when it comes to me, actually, I demand something very different, something very high quality. The reason for that, we have a great relationship with a family in Jerez, in Spain, in the sherry producing region. They cooper the barrels for us, to our specifications. Then they will put our lots of sherry into our oak barrels for two years. The sherry actually seasons the wood. They’ll take our lots of sherry out, they’ll send the barrels back to the distillery, and we’ll actually fill them within two weeks of receiving them.

Do you reject any because of the quality of the wine coming out?

Aaaa, no, we’ve got such a good relationship with the cooper that there are very, very few casks that end up being a problem. It’s just fascinating over there, really. I thought that my grammy was the only one still drinking sherry, but when you’re out there, you really get the degree of passion they have for sherry.

We do a similar thing in Portugal with Sandeman. They will put tawny port in our oak barrels. We go to Sandeman every year and inspect our barrels. We go to Madeira Island, a small Portuguese island in the Atlantic, where they make Madeira wine, and that’s how we finish the 21 Year Old.

Another key difference between Irish and other whiskeys, I suppose, is that we don’t smoke our barley. There’s a complete absence of any smoky, peaty aroma.

[An interjection: Note that the definition of Irish whiskey is quite muddled by now, which is hardly Colum’s fault! To wit: Cooley is definitely Irish whiskey – it’s whiskey made in Ireland, after all – but it’s only twice-distilled, and their Connemara whiskey is peated. The triple-distillation’s not unique anyway: both Auchentoshan (Scotch single malt whisky) and Woodford Reserve (bourbon) are also triple-distilled. Then there’s the “pure pot still” vs. “malt whiskey” issue: Midleton, where they distill Jameson’s – which is definitely Irish whiskey – makes “pure pot still whiskey” with a mashbill of barley malt and unmalted raw barley. Bushmills is an all-malt whiskey.

What does all this mean? Well, as John Hansell told me recently while we were discussing this issue: “Irish whiskey is whiskey that’s made in Ireland.” That’s as close as you’re going to get to a rock-solid definition that’s going to hold off challenges. Now…do I think that’s the whole story? No. I think Colum’s original statement is actually pretty damned close, in a subjective sense: “…lovely, light, fruity whiskey with nice spicy, flowery notes.” There are still exceptions, but if “Irish whiskey” has a character, that’s it. In My Humble Opinion, of course. On with the interview.]

Can we back up a bit? You said that once the sherry cask gets back to the distillery, it’s usually filled within two weeks?

Yeah. We get the casks over to the distillery. You need to fill them as soon as possible: wood dries out, and then if you were to put something in the cask, it would just pour out through the staves. We try to do it in two weeks; it can take longer.

[Our whiskeys arrived at this point.]

You find with Black Bush, I really do, the sensation that, it’s so soft, it just floats on my tongue, it never really touches my tongue, just floats down, it’s like velvet down the back of your throat.

It was the first Irish whiskey I had that I liked.

[That's the end of Part I. More to come soon, now that I've finally got the hang of transcribing from my new digital voice recorder!]
Posted by Lew Bryson at 15:08

Question: What about the Bushmills Single Malt? And how would this differ from Glenlivet and the other single malt scotches?

Thanks again for a wonderful website and a relly cool blog. Wish I was geographically closer to take advantage of more.

Hold your questions till more is up, Bill. The question and response I'm working on right now is about Bushmills being all malt, and Colum's response was "There are three types of whiskey made in Ireland." Interesting stuff, just give me a bit of time!

Ahh, it's no wonder I love Bushmill's.

BTW Lew, the proper instruction here would be, "Ask no questions until you know more." ;-)

"A lot of distilleries in Ireland at the time were independently-owned and quite small, and their biggest market, or perhaps their only market, was the States."

Really?? I must admit, I find that very difficult to believe. Surely the UK and Ireland itself would have been important markets too?

Overall, the Irish market was undoubtedly the MOST important for the industry, just as the UK is for Scotch whisky today. But just as it is for Scotch whisky today, the export market is quite profitable, and a very large part of the business. And don't forget the diaspora of Irish to America in those days: they were a ready market. The American market had gotten them through tighter times in Europe in the 1920s; when it collapsed, things got real tight real fast.