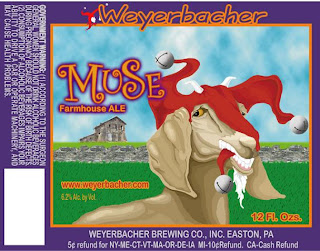 Got a call from Dan Weirback yesterday. Dan and I go way back, he's one of my best friends in the business, and I've always been a fan of most of his beers. We talk, but it's usually gossip about the rest of the biz! So yesterday we talked about Weyerbacher, and how things are going for them.

Mostly, they're pretty damned good! "Sales are up 51% in the first quarter over the same period last year," Dan said, "and the only new territory is Maine, which we just added two weeks ago."

Last year was great for the little guys in Easton. "Volume was up 19.5% last year, dollar sales were up 23%," Dan continued. "I would project 35% growth for this year, with what we’re seeing. Our draft sales are way up, and we’ve never pushed that. We did 4,002 barrels last year. I’m expecting to pass 5,000 this year. You know what we’ve been through: it feels great!"

Dan confirmed what a number of small brewers have been telling me about capital being easier to secure as the category gets a more stable reputation and as brewers show long-term stability (Weyerbacher's in their 12th year now). "This is the third year we’ve been able to get a Small Business Administration loan through the bank, and they’re going to roll it into a single conventional loan at a lower rate at the end of this year. That’s the way things are going."

What's the loan for? Big iron! "We've got two more 40 bbls. fermenters going on line, and a 48 bbl. bright tank was put in last week in. And we've ordered a 72 bbl. kettle, steam-jacketed with an internal calandria, from Bavarian Brewing Technologies. I should call it a 40 bbl. yield kettle, that would be better. We’re also getting an additional 48 bbl. bright tank."

Why all the tanks and capacity? Weyerbacher's getting on the front side of their growth curve. They've realized the costs of missed sales opportunities. For example, Dan says, "We’ve seen opportunities come and go. We know we could have sold triple the amount of Imperial Pumpkin Ale last year. We did triple the amount last year, and we still could have sold more. Those pumpkin beers are a solid niche, people like them. It puts you in a celebratory mood. It’s got substance, it’s got flavor."

Like Jason Ebel, Dan had to take a shot at me for the Session Beer Project. "The big beers have garnered us a lot of attention, and not just from the media. It’s gotten us attention with the drinkers. They’re still drinking session beers, but the big beers get the word of mouth going. It’s set a fire in the 20-somethings. They added to our core audience, and they spread the word with the big beers. It fits my needs well. It’s a good promotional force for your brewery and for the industry. It’s gotten a whole bunch more people thinking about beer."

Speaking of thinking about beer, Dan let out a few new projects. "You know about Blasphemy: the bourbon barrel-aged Quad. We’ve also got a farmhouse saison coming out in May, called Muse. It's spicy, but it's spicy from the yeast, there's no added spices. It's at 6.2% ABV, unfiltered, and we'll have it in all packages, 12 oz., 22s, and draft. We'll have the 12th Anniversary beer in July, not sure what it’s going to be yet. I'm pretty sure, but we're not certain yet. The Double Simcoe IPA went year-round as of last week. We had so many people ask, how can you not do it?"

I asked him if he was worried about getting enough hops for it; there have been some shortages predicted (I'm starting to feel like the farm reporter at WKRP...). "We’re covered on Simcoe," he said, "there’s plenty of those coming."

Then there was something really different for Weyerbacher: "We're playing with some brett beers," Dan said. "We've got a strong ale, about 11.5%, and a 7% raspberry beer. Tart, but not extremely so. We’ve got a barrel of each aging with a brett culture, and we’re going to fill several more barrels of each shortly. But it won’t be out till January of next year, probably, and then only about 50 cases. You just don’t know the results for 8 months sometimes, so it could take a while to ramp up. I’d like to see us do a thousand cases as a seasonal eventually. I think there’s a sizeable market for it. And again, it gains attention, and interests the fans."

Finally, Dan said they're "doing a partnership with the local Wegman’s. They sent five chefs down to taste beers. They’re doing a cheddar ale soup with the Hops Infusion at the Easton store. That’s another nice thing for us. They want to play up the Weyerbacher aspect, a nice little thing." Watch for more Weyerbacher-ingredient dishes at the food area there, too: Dan told me a bunch more, but I just couldn't type fast enough.

Thanks for the update, Dan.
Posted by Lew Bryson at 10:07

As much as I love Weyerbacher, and have for years now, I hope the Raspberry Beret improves ALOT since the Kennett Fest. If not this will just add to my theory that not every Tom, Dick and Harry should be experimenting with Wild Ales.