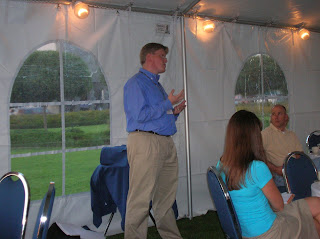 I talked to Anheuser-Busch brewer Florian Kuplent (that's him on the right) a couple weeks ago about A-B’s Spring Heat Spiced Wheat seasonal (that's him on the left). They’re doing a set of seasonals, and this one’s in the style of a Belgian witbier. The beer comes in at 5.2%, so it qualifies under the SBP rules. I've got a short interview with Florian for you, then I'll do some tasting notes and comments.

I met Florian last August, when A-B flew some writers out to their hop farm in Idaho for harvest time. He’s young, German, and quite articulate about brewing, so I was looking forward to the interview.
I had a few "techie stuff" questions I wanted to ask him. Here’s how that went (please note that Florian’s answers as set out below may not be exactly verbatim; I was typing as he spoke and doing the best I could to maintain his phrasing and content).
How different was it to mash with wheat?
Before we release beers, we always brew test batches. We use about 30-35% wheat malt in the beer. We tried raw wheat, but the malt was preferred. It’s made from white winter wheat. The mashing was not really a problem, it didn’t get sticky, not even in the lautering. It took a little longer, but not a problem.
What kind of yeast did you use?
That’s proprietary, unfortunately. We have our own yeast bank. We have hundreds of different yeasts: lager, ales, wheat beers, and so on. We send the Budweiser lager strain out to the other breweries weekly from St. Louis.
What kind of spices did you use? And I understand you used lime and lemon zest as well as the traditional orange peel; why those?
We used coriander for spice. The orange is traditional, the lime and the lemon was a tweak to give it a lemony aroma, a lime and lemon touch. We played around with that in the test brewery.
We probably do five to ten test batches, depending on what you’re doing. It may go more with a new ingredient. For a pilsner style beer, probably less, we’re more familiar with those.
Who’s this aimed at?
I’m hoping everybody will like it! It’s very drinkable and refreshing, a lot of people have tried it and liked it. The craft beer drinkers, we hope. The taphandle is designed to catch attention, to get people to try the beer and get hooked by the taste.
What seasonal is next?

Beach Bum Blonde Ale. Our American-style blonde ale, it’s dry-hopped w/domestic Hallertauer, Cascades, and Alsatian Strisselspalt (A-B buys almost the entire crop of this very nice French hop). They’re also used in the kettle. It’s got some bitterness, but it’s a nice beer for an introduction to craft beer. It’s going to be available in bottles [unlike?] last year, 12 oz. and 22 oz. It’s a nice serving size for sharing. Beer goes great with food, and that bottle size is great to share with dinner. It reinforces that idea.

Thanks, Florian. So how was it? It sure pours like a witbier: orange-gold, heavily hazy with protein and yeast, and a fluffy white head. The aroma was much more citrus than coriander, though that spicy edge was there. The beer itself? Good, fresh, and refreshing, but balanced too much on the citrus side for my tastes. I'm looking for a drier witbier, more on the brisk wheat tang and coriander twist side, something like Allagash. And it could have a bit more complexity, although it is supposed to be a refresher: hard to keep in mind when you're "tasting" and not "quaffing."

The citrus thing is the same issue I have with Blue Moon Belgian White, and maybe that's why; given the booming sales of Blue Moon, it's entirely possible that A-B would aim more towards that end. After all, as Willie Sutton was supposed to have said about why he robbed banks: That's where the money is. On the other hand, maybe that's just how they wanted the beer to taste; after all, they did add the lemon and lime, which I kind of admire for the innovative thought involved, a very Belgian way to do things, actually.

Can I still skip this because of the lameass tap handle?

Kinda looks like that straight-up-hair dude they've got ringmastering Ringling Bros. these days, don't it? Except with a big orange head, that is. As my mom would say, "Well, dear, it is...colorful.

Man, that mohawk is so with it. I actually saw this beer in the supermarket last week. I was about to pick it up... till I saw the little A-B logo on the bottom. They almost tricked me. Maybe I'll try it anyway.

It's about the beer, that's my philosophy. I'm not going to miss trying a good beer because I've got angst about the brewer.

Think about who you're buying your clothes from, what the kitchen conditions are like in restaurants, what the staff is treated like in hotels and motels...

Where do you draw the line? I draw it at fast food, myself. But I try any beer I want, any time.

Oh, and Jonathan...I took another look at the bottle. The 22 oz. one I had says "Anheuser-Busch" in pretty big letters, right up at the top of the label. Who's tricking who?

My wife liked the label and likes flavored Belgian brews, and knows I do too. Tasting it, we wondered how and why anybody could make a cloudy wheat beer with spices, and remove all discernable flavor. Then we read the small print on the six-pack. Anheuser-Busch tries for a piece of the microbrew market! I suspect microbrew drinkers will only try it once.