Since I had to stay straight enough to drive 6 miles back out to my motel, I was in real good shape Sunday morning. Got up about 7:00, showered, dressed, and packed, and went downtown to pick up Woody. We broke our fast at the Zodiac Dinor (2516 State St., (814) 455-3543), where I had another Greek sauce omelette. Good omelette, but the Greek sauce was cold in spots: kinda like it had been heated up rapidly and unevenly. Bummer. Quiet on a Sunday morning. We read the paper and headed southeast.

I'd decided I wanted to skip the Interstates this Sunday morning, so we picked up Rt. 6 and then ran down through the Allegheny National Forest. Great roads, great ridge-running, and we made good time. Woody was dozing on and off, so I just let the Passat run and listened to the music. We ran I-80 for about 20 miles, then got off near Clearfield. I was headed for Otto's, but also for Port Matilda, where I pulled off for a kind of second breakfast at Clem's. 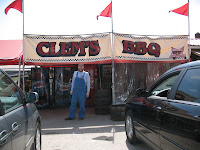 Clem's does barbecue, and I love it. I regularly go out of my way to get it, because Clem Panteleone agrees with my theory of barbecue: the meat is more important than anything: the smoke, the wood, the sauce, the atmosphere.

The smoke? Clem cooks his ribs hot, over fire. Heresy, but shut up and eat 'em. The wood? Clem uses oak because (he told me) hickory has too much flavor and masks the pig. Sauce? It's a rich red sauce, sweet and tangy, but it's not baked on like some places. And Clem's place has NO atmosphere; hell, it doesn't even have four walls or a place to sit. But the kid working the place did come out and offer everyone some wings to sample (I just don't eat wings any more, they're death on the diet, but I had one. Mmmmmm...). And the pork is just fantastic. I got a combo plate of a half rack of baby backs and a portion of boneless "country" ribs. Good Gawd, it was so good that I ate till I hurt. I hate doing that any more, but I held even on weight over the trip, so I guess I got away with it. 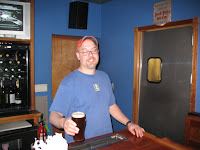 We wet-napped our faces and got out of there. Down to Otto's, the great brewpub on the west end of State College. No need for lunch, obviously, but I did get a half-pint of Arthur's Mild, and it was tasty and session-delicious. Owner-brewer Charlie Schnable took a break from epoxying the floor of his new coldroom to join us for a quick beer, then took me on a look in the brewhouse. It has filled up since the last time I was in there! Lotsa tanks, and Charlie's kind of wondering what he's gonna do next. Hope he keeps making the delicious beer he's been making.

We were joined at the bar by Sam Komlenic, who I last talked about in the WhiskyFest posts. Funny; I correspond with Sam 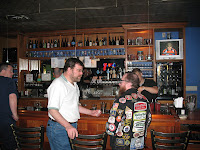 fairly often, but this is the most I've seen him in two years. A pleasant change. As you can see from the picture to the left of Sam and Woody, Sam, another former "big guy," has benefited from the Weight Watchers program; dropped 30 lbs. and never stopped drinking beer and whiskey. It works, folks! Sam treated us to a sample of some pre-war rye whiskey, and it was damned nice. Thanks, Sam.

We were going to take a spin out to Millheim to see how the Elk Creek brewpub project was coming along, but I got a call from Cathy: my brother-in-law had had an accident and was on the way to the ER. We finished up and hit the road. About the time I dropped Woody off in Lancaster, I got another call: the brother was not as bad as we'd been told, and he was going to be fine. Good. Danke, Herr Gott. So I drove home, and enjoyed the presence of my family and my wee dog. A good weekend.

Lew, I notice you seem to bag milds quite often. I'd been led to believe the style was virtually unknown in the US.

Hey, I got another at the Manayunk Fest here in Philly last weekend, a dark mild with espresso added, All Night Ale from Nodding Head brewpub. Must be the superior brewers of Pennsylvania...hope I can find a mild in San Diego this Friday!

Lew, that dude in the jacket is beggin' for the wrong attention from the local constabulary. But I love that there's a Capital patch in prominence!

Lew, have you ever been to "the other Clem's" on Route 22, near Blairsville?

The way I understand the story is the husband/wife split, established a distance rule on the businesses that allowed keeping the name, and now there are two.

The one here in SW PA, does have seating, though the 'walls' are raisable garage doors. Nice!

YOU ARE KILLING ME!

Do you know what BBQ means to the average Canadian? A weenie on a gas grill. Now I have to find this place and explain how the 12 hour trip is an important part of my children's education. This is the stuff, by the way, that make your beer books gold.

Eli, haven't heard of it; I'll put it on the list.

Alan...I'd apologize, but I do the same thing to my kids. Dragging them to Baumgartner's Cheese Shop and Tavern in Monroe, Wis., for example. It's a good life.

What is the latest on the Millheim brewpub? I saw in a previous post they hired a brewer, but it doesn't seem they're open yet? I'll be in Coburn (just down the road) next week and I was hoping the place was up and running.

Millheim -- Elk Creek -- is still a ways off from opening. They still have work to do on the building, they still need paperwork approval... I'd guess September, but I could be off by a couple months.

Folks,
I wanted to note that I got a lengthy and passionate comment about the "barbecue" at Clem's. I chose not to publish it because it was much too long, and somewhat over-the-top snarly -- about Clem's, not necessarily me. The fella said that Clem's was not true barbecue (it's not), that it was rubbery and overdone (I've heard that from Guy Hagner, too), and that it swims in cheap sauce (oh, well). He's probably right. I should probably apologize for liking it so much (he said he wouldn't feed it to his dogs, because he loves his dogs), but I won't. In fact...I'll probably go back and get more. Of course, I'll also get 'real' 'que at Dinosaur when I'm in Syracuse, and my bro-in-law Carl and I will be hitting every shack in sight when we drive down to Durham for the World Beer Fest next month. I dunno. Guess I'm just a pig, when it comes right down to it.

Yeah, Yeah, Yeah...Lew, we know the guy...he wants to drag Clem behind a truck, right? I appreciate that you did not post his message. It is available all over the Internet, (he just does a simple cut and paste...real creative.) Whether or not he considers it real BBQ is not important. We sell about 15,000 lbs. of meat per week, and we take pride doing it. We never make lofty claims that our BBQ is the best...we just serve our unique style of BBQ and know that it is appreciated by many. We just do what we do best which pleases a lot a PSU fans, truckers, and anyone else that is willing to make the stop at Port Matilda.