Getting closer in Conestoga 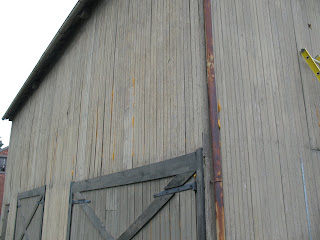 I was in southern York County over the weekend, rusticating with the family, my parents, and Uncle Don and Aunt Alice on the Susquehanna River. Saturday morning the menfolk got the hankering to explore, and we hopped into the Passat and cruised the river hills on the Lanco side. It was a trip down memory lane: Don and my dad had family in the area years back, and they talked about how things had changed. The river hills are still pretty rural; dirt roads abound, there are a lot of small stores and woodworking outfits, no grocery stores or malls or convenience stores.


As we got a bit farther north, we started homing in on Conestoga, where Matt Keasey is building his startup micro, Springhouse Brewing. We cruised the main drag, and saw no signs or other evidence... but then I saw a barn with insulation oozing out of the cracks between the planks, and a stainless tank peeking out through the door...Brewery sign. 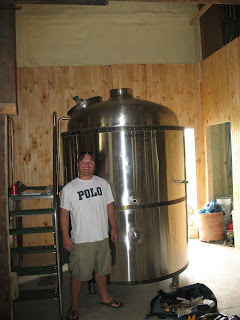 Sure enough, when I called Matt and asked if he was around, that was the place. He was away, but was in this morning, when my son and I were headed back, so we cruised up twisty River Rd. again, and stopped in for a visit. There were two electricians laying cable, and Matt himself, standing by his JVNW brewkettle.

The system's out of Via Maria in Holland, MI, according to Matt, and maybe out of a place called Black River Brewing in Holland before that...but that wasn't quite clear. What is clear is that there's still some work to do here, probably a month or two of work, but things are coming along.

The solid stuff: It's going to be mostly draft, with one bottled beer (probably 7 Gates Pale Ale). Matt's in the process of deciding what the line-up will be. There's not going to be a pub; strictly production, and pretty local to begin with. "Local" means Lancaster and York, probably; there aren't a lot of liquor licenses in the local area.

The setting is about as southern Lancaster as you can get: just outside a small town, beside a working farm, surrounded by open fields and pasture. The building is an old tobacco barn, insulated with blow-in foam. It's a tight fit, but workable. 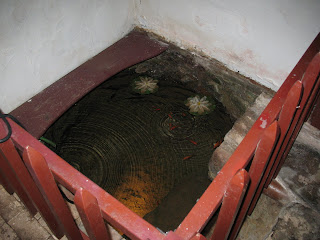 With luck, we'll be seeing Spring House beer by November. And yes, there actually is a spring in Matt Keasey's house, next door to the brewery. Here's a picture: it's in the bottom floor of the house (right beside a big dehumidifier!), and yes, those are goldfish in there. Pretty cool barroom springhouse set-up that he may open to the public once things get rolling. Cheers, Matt!
Posted by Lew Bryson at 16:37