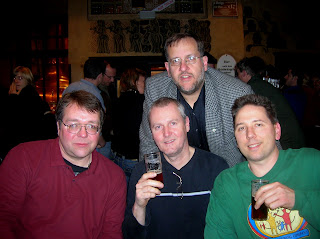 I've talked about Guy Hagner, the fellow who's close to opening One Guy Brewing in Berwick, PA. I've known Guy for a number of years, bought beer from him during the short life of Franconia Brewing, ate his own excellent pizza at his home, and ate more excellent pizza with him in Düsseldorf last January in between stops at the altbier brewpubs in town. That's him, on the left, at Zum Uerige with Tom Baker and Nick Bruels and I; not a great picture, which doesn't show you how big the man is, but the best one I have. Come to think of it, it's hardly a great picture of me either, is it! (And yes, it was taken the same day as the picture at the top left of the blog homepage, in fact, Nick took that picture.)

I interviewed him for a couple technical brewing pieces I did last year, and liked the contrarian answers I got from him so much that I asked him if he would mind doing a monthly piece on beer and brewing for me. He was pretty busy at the time, but things have evened out a bit with One Guy about to open (the first batch has been brewed, BTW...but he wants to have plenty in the cold room before opening, so don't get eager!), and he finally got back to me. He thought it might be best to set his bona fides before making pronouncements, so here they are, the first installment of a regular feature here that I'm going to call Guy Talk.

In the famous words of a former vice-presidential candidate: Who am I? Why am I here?

To answer the second question first, Lew was kind enough to offer me this forum to answer technical brewing questions. My idea is to do it with a slant--looking at the brewing process in a different way while challenging some accepted facts and opinions. Possible future topics might include: You’d be surprised how hard yeast works for you; Is it all about decoction—why is it so hard to capture the elusive German malt flavor?; Is this sour beer spoiled, or is it worth $15 a bottle? I’d love to receive any brewing-related questions, just don’t be surprised if you get a different answer than you might expect.

As to who I am, I began homebrewing in 1978 - the absolute low point of the US brewing industry. Two years later I spent a life-changing 6 months traveling Europe--15 countries but mostly in Germany (Franconia) and Austria. My travel guide was Michael Jackson’s first edition World Guide to Beer, undoubtedly the greatest beer book ever written.

I couldn't believe how wonderful and interesting the beers were. Bamberg’s Schlenkerla Rauchbier (smoked beer? Are you kidding??), the Pinkus Müller Altbier pub in Münster, Augustiner Bräu Kloster Mülln of Salzburg, Munich Oktoberfest, I was overwhelmed yet I also felt right at home. Beer culture and great beer were so much a part of the lifestyle, why must we be deprived in the US? I came home convinced that a small, local brewery with great beer could succeed in America.

So I pursued a path into the industry, starting at Pabst in Newark, NJ, as the lowest-paid file clerk in the company. I loved it--I got to learn the inner workings of a brewery and the cooler in the lunchroom was refilled each morning with beer fresh from the bottling line.
After attending brewing school in Chicago and after a brief stay at a long-forgotten micro in Little Rock, I ended up at Dixie Brewery. My 4-1/2 years in New Orleans was my real education. Brewing under adverse conditions with the building and equipment literally falling apart, you learn “practical brewing” in a hurry.

A more stable position as Brewmaster at The Lion in Wilkes-Barre left me longing to pursue the dream of starting my own small brewery. So I jumped feet-first into the fast-money era of the 90s when the sky seemed the limit for craftbrewing. It was a hard lesson. The “easy” money was anything but easy. By the time we got the doors open we had missed our window of opportunity (that was Franconia). Buy me a beer someday and I’ll tell you the whole story.

Now I’m back at the plate for another swing of the bat. This time I’ll be happy to beat out a bunt for a single rather than aim for the fences. Wish me luck and I hope to see you here at Lew’s place each month!

If you've got brewing questions for Guy to consider, something that's been bugging you and you can't find a straight answer for anywhere, send them directly to me (please don't put them in comments, I'll just delete them to keep things uncluttered) and I'll pass them along. And I'll be sure to let you know when One Guy finally opens.
Posted by Lew Bryson at 13:22