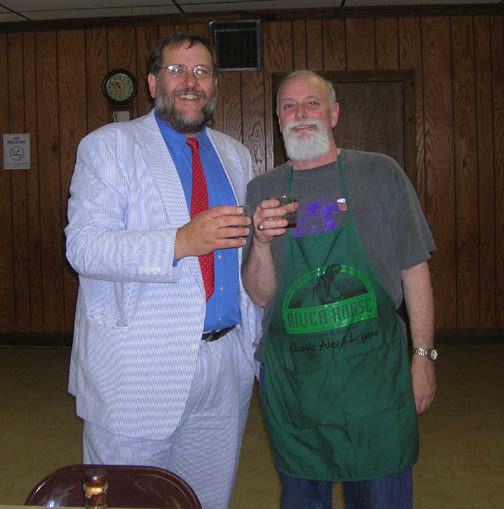 New Jersey Breweries
on the way!

After years of people asking "When are you going to do New Jersey Breweries?", and jokes about a pamphlet or a slip-in addition to Pennsylvania Breweries 4th edition, I am pleased to announce that New Jersey Breweries is underway. I have signed a contract with Stackpole Books to do the book, along with my co-author for this project, Mark Haynie.

I'm sure many of you know Mark Haynie. Mark is a New Jersey native and well-known beer-lover who has had his writing published in many of the same publications I've been in. Like me, Mark is a founding member of the New Jersey Association of Beerwriters, and knows one hell of a lot more about the Garden State than I do.
We're faced with a problem on the book, of course: there are only about 20 breweries in New Jersey. Not to worry: we've come up with plenty of ways to give you your money's worth, including a couple of real surprises. Every book in this series has been an improvement on the preceeding books, and this will be no exception. Look for it in the fall of 2008...I think. Scheduling is always a bit iffy!
Posted by Lew Bryson at 14:38

I've got all your other books, can't wait to add this one to the library!

I need someplace to go for good beer when I visit my in-laws.

Then, there was Fodor; now, there's Bryson!

Bill,
Andy Crouch's New England book looks so much like mine (inside, that is) that for me to do it would be redundant. Unless he doesn't update it. In which case, 2010.

Eric,
I feel your pain. We'll look; if necessary, we'll convince someone to open a place.

My deepest appreciation and thanks.

God knows I've pestered you enough about this.

I would suggest that, while I realize that defunct breweries do not fit the format, a small chapter on dearly departed Heavyweight would be greatly appreciated.

No fear. You'll find at least a little on places like Heavyweight and Blue Collar and Joe's Mill Hill Saloon. They earned it.

I saw a Heavyweight variety case at the beer store last week.

It was a little dusty.

Should I explain the situation and make a cheaper offer?

Or is that tacky?

Nice addition to the lineup. Maybe the rumored Red Bank Triumph will be open by publishing day as well?

I was born and raised in New Jersey, moving to Maryland two years ago.

I do miss it sometimes. Taylor Ham, egg and chees on a Kaiser roll especially. Can't get 'em down here.

It's nice to see Garden State brewers get a little love. I'm looking forward to this.

Maybe, just maybe, there will someday be a brewpub or two in South Jersey (not Atlantic City, mind you, but the suburbs of Philadelphia on my side of the bridge).

Maybe, just maybe, I might be the one to open it... if I hit the Mega Millions tomorrow in order to have enough loot to pay off the numskulls in Trenton.

What a sad, sad state... when you look at one of those maps in Ale Street News (or maybe it's Mid Atlantic Brewing) and the entire southern end of NJ is a barren beer wasteland.

Lew, more power to you if you can actually fill up an entire book on our teeny tiny brewing industry.

Where did that suit come from? A shower curtain, perchance?

Yeah, it looks pretty bad there. It's a normal seersucker suit, but when I changed the dimensions on the picture, the stripes on the suit developed some kind of moiré pattern effect. Looks goofy, but it's the only picture I had of Mark and I together.