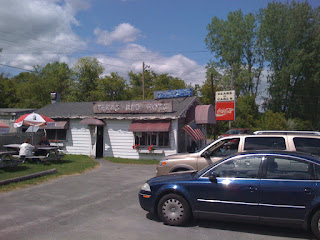 I wanted to get some michigans on the way up to Montreal. Michigans are the Plattsburgh version of chili dogs, red hots, or Texas hots, also known as coney islands. The michigan has a drier, meatier sauce, and is dropped into a somewhat heavier split-top bun. Or, at least, it used to be.

After rolling north for hours (and getting 44 mpg, thank you very much) through the Hudson Valley and the Adirondacks, I was ready for lunch at 2:00. And since McSweeney's Red Hots was a stone's throw from Claire and Carl's, the two hearts of michiganness, I had both.


The upshot? Not a lot of 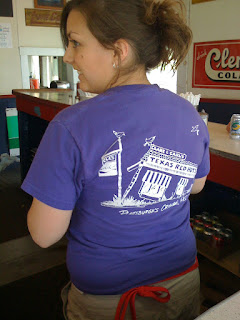 difference in dogs. Carl's delivered more onions, and a softer, lighter roll, but the sauces? Both had finely minced meat, not overly spicy but tasty sauce with very little juice. But... not so different. Both very good, but very similar.

The difference lies in the places. McSweeney's was plain jane; an independent, small-town lunch counter, yes, but without verve or individuality. C&C is an old clapboard building that's literally sinking into the ground, does real car-hop service, and is friendly as a puppy. It's fabulous, and I loved it. Definitely worth getting off I-87, too.
Posted by Lew Bryson at 00:29

Email ThisBlogThis!Share to TwitterShare to FacebookShare to Pinterest
Labels: food

Give this place a try on your way home: http://www.tonysnewburghlunch.com/default.html

You can get the "sauce" on the cheeseburgers as well. Not far from: http://www.thegoldenrail.com/

I'll keep that one for later, Sean (been to the Golden Rail a number of times, great place); I'm going home a different way, stopping at some places in Vermont.

Near Newburgh you have Keegan in Kingston and Gilded Otter in New Paltz. When I was a full time climbing bum a lifetime ago, living in either a tent or a book strewn VW bus in New Paltz, I would have killed for the Otter (although now I am a bit more critical of the beer). Now? My knees hurt to think about those days.

I also have fond memories of bizarre microbreweries in VT. I am technically young, so my nostalgia dates to the 90's. Old for some, young for others. Anyway, Burlington and Wilmington (near Mt Snow where that cow bus, the Mooooo-ver, would cart young imbibers all around). I never did any skiing b/c after years of rock and ice and road life, I finally hurt myself, so I spent the days and nights either reading or in the microbreweries, sometimes helping to brew. Fond memories of the Mapleleaf, which I think has closed since, right down at that intersection in Wilmington. Brewing, drinking, and late night acoustic music. Fun times in the North East.