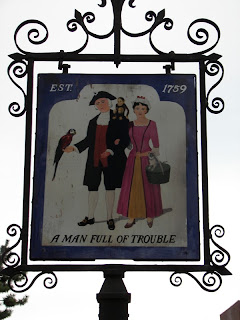 Chris Poh, of the American Public House Review, whose radio show I was on a few weeks ago, contacted me recently with a tempting offer: how would I like to join him and Ed Petersen at A Man Full of Trouble, Philadelphia's last standing original colonial tavern? You mean the place UPenn owns, down near the Olympia, that isn't open to the public? Hell yes, I would!

And that's how last night I found myself sitting in the living room of A Man Full of Trouble, being served a beer (a Tröegs Pale Ale) from a lovingly re-created caged bar by the 'publican,' Patrick Spiro, a recently graduated UPenn doctorate student, who lives there with his wife, Laura, and their newborn daughter (see below). And just after that, we went up to the second floor balcony just in time to 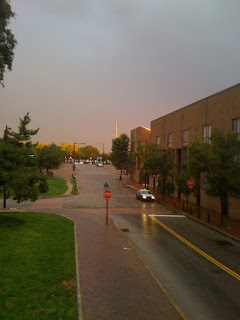 catch the last light of the day, pictured below.

The view is striking: where you can see the cobblestones coming in from the left, just past the Stop sign, is the course of the long-gone and covered Little Dock Creek. Straight ahead is the Delaware River -- no I-95, this is one of the rare places where it's covered over -- and that's the stern mast of the Olympia in the distance, starting to glow in the sunset light. A rainbow developed over the next few minutes. We were standing on a balcony that had been reconstructed from pictures of the building from the 1830s. The cobbles, the magical glowing light, and the mast of the ship came together for a breath-taking moment.

Patrick took us down to the basement, where the building's original well is still open to water from the Delaware, showed us how the walls lean inward, and generally made us quite welcome. We chatted about blogging and advertising, of all things, then I broke out a particularly appropriate beverage, given the setting: a sample of Finger Lakes Distilling's soon-to-be-released rye whiskey, a young and brilliantly spicy whiskey, full of rye character at a barrel-strong 110 proof. We sipped, and looked around the place. Then Patrick pulled out another surprise: a growler of Cape Cod Summer, a beautifully accurate hefeweizen, a great way to top off the evening. 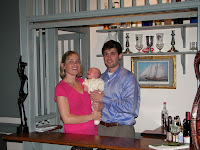 I may never get the chance again, but it was quite special. I breathed in a bit of Philadelphia history, American history, booze history. I was a man full of satisfaction. And a little bit of rye.

Thanks to Chris Poh for the use of the two photos on the left.
Posted by Lew Bryson at 22:46