Good news from Pittsburgh about the PLCB problem 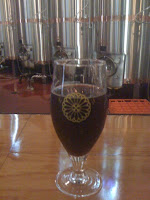 I was just at the Church Brew Works this afternoon (I'm out here with my daughter's school robotics team at the FIRST regional competition), sampling a Burly Friar Barleywine (seen at right, talked about here, and it was good: not bourbony, but drier wood spice and a little vanilla, and certainly not a flabby beer at all; I had Brant's Czech Pils, too, and it was very nice, body was about perfect). I'm talking with Brant (ran into him on the steps out front, it was a gorgeous day here), when Church owner Sean Casey walks up. We chat, he says he can't talk long, there's a state senator coming for a tour. We talked a little beer raid smack, and in walks the Senator.

And Sean introduces me. Next thing I know, I'm talking about the beer raids with Senator John Pippy (R-37), who is the chairman of the Senate Law and Justice Committee, the folks who oversee the PLCB in the Senate. Good guy to know! That's when he told me that his committee and the House Liquor Control Committee will be holding joint hearings on the beer raids on April 13. There will be representatives from the PLCB, the State Police BLCE, Monk's Cafe (I assume as the owner of one of the seized brands), and Origlio Beverage. Not mentioned, you'll notice, is Brendan Hartranft and Leigh Maida, the owners of the bars that were raided first. There's more on this at Don Russell's Joe Sixpack site, and Don also has an excellent piece on just how worthless the brand registration list is; go read that now, because it will really piss you off.

A couple titbits to add. First, I asked him just what purpose brand registration serves. He told me that it was for consumer protection, to tell you where the beer came from. But all that's right on the label, I said. Well, there's not that much on a beer label, he began...and I decided to let it go. More on that at the other blog later. Second, and of more interest to Philadelphians, we talked about the source of the original complaint. It seemed odd that an anonymous complaint would be taken so seriously, I said. Did the BLCE really do that on the basis of an anonymous tip, or are they just keeping the identity confidential? They know, he said; they said they had a "complaint." That means they know who made the complaint. Interesting.
Posted by Lew Bryson at 16:11

sounds like you are out in Western Pa again hmm wonder what Lew is up to,

What will be on the agenda?

"I asked PLCB attorney Rod Diaz several questions about the disclaimer and the registration list, including:

Q. Can you explain how the PLCB expects licensees to determine if a beer is properly registered when the web site’s disclaimer clearly warns that the online list should not be used for any legal purposes?

A. “If I were a retail licensee, I think I’d call the board first. It’s always prudent to double-check.”

How fun it would be if every bar in PA called the board to check every beer they carry. That would keep the LCB busy for a while.

Ironic how they are suddenly concerned about the consumer and what's on a label while the "supplement" industry runs amok with any kind of outlandish or even harmful statement they want.

Oh and all COLAs are available online for the PUBLIC. Has anyone found the online PA brand registration site yet... anyone???

I can understand the "knowing where the beer comes from" argument, because anyone can make a label and lie on it. at least it if was registered, it has to be legit. (just playing devils advocate).

Ahhh, I see link for the list on your other site. Heh ok, I'm still aggravated. We'll I'm still pissed I pay more than bud does for brand registration...

Actually, Jay, that's not so. The Feds are very tight about what goes on the label...so the state has nothing to add.

You know, the great thing about federalism is that every state serves as a laboratory. As far as I know, PA is the only state which has such a registration requirement (and even if I'm wrong, such states are few and far between). So here would be my challenge to PA lawmakers: show me a statistic--any statistic-- that demonstrates that the PA registration requirement has achieved any of its goals when compared to other states without such a requirement. If what they're saying is true, it shouldn't be hard to prove, right?

That won't work, Russ. They already can't prove that the whole "control" idea does anything!

Lew, I saw your name listed in contributing authors section of the BeerAdvocate Mag this month. Which article did you write?

I dunno, HB, haven't seen the issue. I haven't done anything for them for a while, but I do think there was one piece I did that didn't run...maybe that, or maybe I'm just on as an occasional contributor. They pay reasonably well, I should pitch them some ideas.