THANK YOU to everyone at the Hulmeville Inn!

I went down to the Hulmeville Inn yesterday to celebrate Steve Hawk's win as Philly Beer Geek. When I got there, the first thing I did was order a Sierra Nevada ExPorter, because Jeff Lavin, the owner, had decided that he would donate the proceeds from the sales of that keg to the Pancreatic Cancer Action Network in my father's memory. When I wanted to pay, the bartender told me, "You'll have to find The Mayor; he's got The Can." Hah? 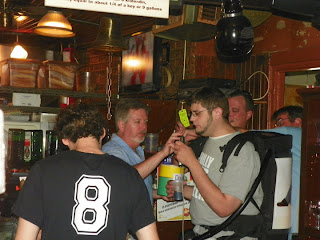 Well, I knew who The Mayor is, anyway: Mike Sodano. So I went looking for Mike, and found Jeff. Jeff went to look for Mike, and I went back to my excellent beer (kept for me by my excellent wife and the charming Bryan and Patty Kolesar, and Philly Beer Geek organizer Carolyn Smagalski, who is recently engaged, congrats!). About ten minutes later, Mike and Jeff came and got me for pictures. Pictures? Yeah. What happened, before I got there, they'd strapped a 3 gallon keglet of ExPorter to Steve's back (at left), and he'd gone around telling people what was going on, and Mike followed him with a can for donations. Jeff handed me an envelope that had a check and and more cash donations that totaled $843 for pancreatic cancer research. (That's Mike, me, and Jeff in the picture below; we grabbed Christine Gumpper and got her in because she's such a sweetheart.) 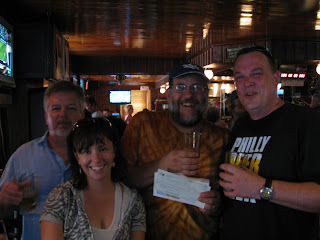 I was stunned...but not speechless. Mike got the mike, quieted the crowd, and let me speak. I told them what they'd done, told them they were fantastic, thanked them "from the bottom of my beer-soaked heart," and toasted my father with them. It was a humbling moment. My thanks to everyone there that day. I will write a check for the cash, and send both checks into PCAN tomorrow.