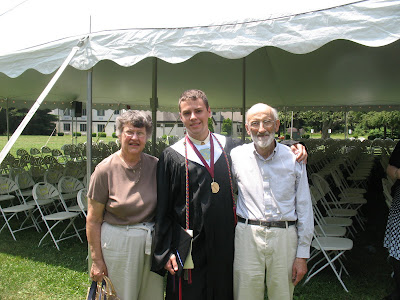 My father died last Thursday. He was 81, and one of the most decent men I have ever known. He had no vices -- other than record-keeping; he wrote down everything -- worked hard, was married to my mother for almost 58 years, and was honest to a fault.

He died from pancreatic cancer, a full 21 months post-diagnosis, without surgery. He fought hard, and was one of the lucky people who responds well to chemotherapy; pancreatic cancer kills over 75% in under a year. The end was swift; the picture of Thomas's graduation was only a month ago, and he was still in pretty good shape at the time. Staying alive to see Thomas graduate was a major accomplishment for him, and we were all proud of him.

But it wasn't his death that I'll remember, of course. It was his life, how he touched so many people. Sir (I called him that once to get his attention on a crowded field trip, and it stuck) was a school teacher at the Solanco school district in Lancaster County for almost 30 years, and drove bus for athletic events and special needs students from 1962 to 2008. He held the students to standards -- his buses were clean when he picked them up, and they were clean when he dropped them off -- and they responded well to it. Everywhere we went as I grew up, we ran into former students who would greet "Mister B" with a handshake or a hug. I do mean everywhere, too: in a campground in California in 1973, and a nurse in the ICU, less than an hour before he died.

My father didn't teach me to drink beer. I learned that on my own in college. But he did give me my first sips of beer -- Duquesne -- and straightened me out on the "sinfulness" of drinking. I was ten years old or so, and reading some older books with some quaint ideas, and when Sir asked me if, as usual, I'd like the last half-inch of his beer after Sunday dinner, I said, "No thanks, Father, I don't drink on Sundays." He let me know what he thought of that: "Don't talk nonsense. If it's good enough for other days, there's no difference on Sundays. Have the beer or don't!" I did, and I learned a lesson: drinking is not inherently sinful.

Sir went along on most of my research trips for the Breweries books. He almost never went in the places -- he wasn't much for bars -- but would stay in the car, reading his book. That got rough sometimes. There was Chief's, in Pittsburgh, a neighborhood so bad that Sir kept his .357 openly on the seat beside him. There was The Strip, where things were so busy, he had to park over a mile away and -- in pre-cell phone days -- would drive in to a pre-arranged intersection every 30 minutes to see if we were done yet.

Then there was a long bar-hop in Buffalo, when Flying Bison owner Tim Herzog took us around to...8 places one night. The mini-van had an electrical fault, and the interior lights would not turn off, and the door-open alarm kept dinging the whole time, and it was about 18 degrees. And the bars close at 4 in Buffalo. It was a long night, and Sir was a bit put out with Uncle Don and I when we kept going. When we finally did get to our motel, a $45 a night cheesebox in Tonowanda, well...there was an energetic young couple next door who weren't sleeping much. We pretended to ignore it for almost 45 minutes, when Sir tossed in, "He's my hero." Don and I laughed so hard... I almost fell out of bed.

I could go on forever; I've known the man all my life. How he insisted I set up an e-mail address for Penderyn ("I might have things to say to him I don't want you to read," he explained), the way he loved the simple things in life, the way he loved to tweak people's sensitivities ("Sure are a lot of pansies in this town," he remarked to me on a sidewalk in New Hope once. "Sir!" I hissed, "Stop that!" He took a practiced look of injured innocence, said "What?" and gestured at a barrel planter full of...multi-colored pansies.), or the elaborate lengths he would go to for a bet, or a joke, or to save a nickel.

But I won't. I can't, because I've got work to do, and he'd want me to do it. He was a good husband and father and grandfather, he loved Cathy as if she were his own, doted on the kids, and lavished way too much attention on my dogs. The worst part of this is knowing I can't just pick up the phone and ask him how he's doing, and hear him say one more time, "You know, thanks for that wheelbarrow you got me. It's really great."

Farewell, Sir. We'll see you later on, in the sweet bye and bye.

I expect to have particulars on the memorial service posted later this week. It's at the Leacock Presbyterian Church in Paradise, PA, probably Saturday morning, but we don't know for sure yet. Sir's obituary ran in the Lancaster New Era last Friday...and Saturday. In other tributes, David Byrne posted this note on his "Ringside Ramblings" Lancaster sports blog.

I've been remiss in mentioning someone else: my mother, Ruth, who has been Sir's rock all this time. She never wavered, never gave in until the very end. She was there with him every hour, talking, chiding, calming, caring. Thanks, Mum. I'm sorry I didn't help you more.
Posted by Lew Bryson at 09:07

So sorry, Lew. He sounds like a wonderful man and a great father. I'm sure that all of your readers, like myself, are happy that he got to experience so much of your success- every parent wants their kid to do well for themselves and you certainly have. Cheers to Sir!

Lew - That was a fine tribute. Sorry for your loss. Peter A

Conveying condolences and emotion through a comment here is not very easy, but you and your family are in my thoughts this week as you deal with your loss. Thanks for sharing with us some the grief along the way as well as a few touching remembrances of him here today.

Sorry for your loss,Lew....
He sounds like a wonderful father and a great friend.......May his memory and strength help pull you thru...
Joe M

Lew, Thoughts, prayers and condolences to you and yours on your loss. What a moving tribute.

What a moving tribute. My condolences to you and your family.

A fitting tribute to the man that meant so much to you and helped form the great man you are today. We wish you the best in getting through it.
Mark & Mary Lu

I'm sorry for your loss and moved by your reminiscings. May you and yours take comfort in each other and in your memories of your dad.

What a wonderful tribute. My condolences to you and your family...

Lew, I am so sorry to hear about your Dad. Having also lost my Dad to cancer, I know it's not easy even when you know what's coming. But from what I'd read from you, it sounds as though "Sir" was able to live well through the last couple years despite the cancer and the treatments. My thoughts and prayers are with you.

Lew thanks to you and your father I learned of the horrible sickness called Pancreatic Cancer. Also thanks to you I learned of a fine man who did the best he could under bad times. Tonight when I get home I'll raise a glass to him!

Damn Lew. So sorry to hear about your family's loss. Cancer sucks, period.

You know it, Loren. I wanted cancer to be a person so I could put on my big boots and kick the shit out of it.

A great tribute, Lew. I'm sorry to hear about your loss.

So sorry to hear of your loss Lew what a nice moving piece you wrote to honor him though. He was a great fighter who obviously loved life to beat that awful disease so for so long. I hate that disease with every ounce of my heart

Very sorry to read this, Lew, and our best at this difficult time.

Sorry to hear about your loss, your father certainly sounds like one of the world's characters!

Condolences Lew in this most difficult of times.

Beautiful. I repeat my condolences and alwsys keep you in my prayers.

Thanks for sharing this with us, Lew. My condolences.

Please accept my condolences for your loss. He sounds like a wonderful man and father

Lew....No words are good enough for this. Thanks for involving us in the journey you and your family have taken over the last months. Cheers to Sir and his family!

That's a truly gorgeous tribute, Lew. To Sir, with love (and a beer).

I've lost people to pancreatic myself. Swift, tough SOB of a disease, although it looks like you had some good extended time. You couldn't have chosen better words. Sounds like the man touched a number of people; we should all be so fortunate. My sincere condolences, sir (my grandfather embedded the "sir habit" in me at a young age).

My condolences. The man facilitated so much for so many. I forwarded your post to a fellow blogger from Buffalo who will no doubt pick up the phone to call his father.

My thoughts and prayers are with your family.

I'm terribly sorry for your loss. He is in a better place and was able to see his grandson graduate,so those are good things. My prayers go out to you and your family.

You were lucky to have a great dad. So sorry for your loss.

So sorry to hear of your loss Lew.
It's rough, but as I've found since the time of my own Dad's passing some years ago , I believe that the wonderful memories you hold will keep him alive in your heart forever.

My sincerest condolances, Lew. Your father is a great man.

Lew, my condolences to you and your family. I remember meeting your father on a couple of your Pittsburgh trips (and always felt guilty for leaving him in the car!) Our thoughts are certainly with you right now.

So well written. Tough to keep a dry eye whilst reading. Sorry to hear of the loss.

So sorry for your loss, Lew.
He sounds like a wonderful man. you and your family WILL be in my prayers.
nate

Sorry for your loss Lew. My condolences to you and your family.