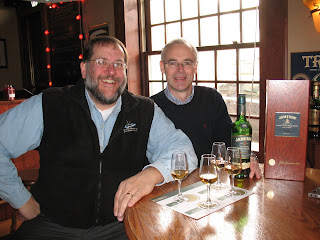 Well, what a great time with David Quinn of the Midleton Distillery this morning. We sampled the four whiskeys in the Jameson Reserve 'family,' including the new Jameson Rarest Vintage Reserve (which I made damned sure I finished my sample of, let me tell you). We were supposed to talk mostly about the Reserve family, but by the time we were done, we'd ranged far and wide.

I got in most of your questions, but not all. Here are answers to the shortest, most urgent ones: The Jameson 12 Year Old is not going away, Jameson Gold is going to be a regular issue, and it is unfortunately not very likely that they will be bringing any more "Irish only" whiskeys -- Paddy's, for instance -- to the U.S. market (mainly because they're doing so well with Jameson's that they don't want to dilute the market, sounds like).

I'll try to get some of the actual interview up, but there's a lot more of it than the Colum Egan one: we talked longer, and it was just the two of us in the bar, really, so we had a lot fewer interruptions (of course, the recording is a lot easier to understand, too!). Some good stuff, including a lot about barrels and casks, and a lot about all the different whiskeys they make at Midleton's and how they do it. Good stuff.

Oh, and by the way: we did the interview at For Pete's Sake in Queen's Village -- a favorite spot of mine, and it turns out, David's, too: his brother Peter owns it!
Posted by Lew Bryson at 16:53

I see his point on Paddy's. I am glad we get Power's instead. Just something about the copper taste that intices me. I guess if I were willing to spend hundreds to thousands of dollars on a bottle of whiskey flying to Ireland wouldn't be too much to go pick it up. Ironically when I went to Ireland I came back with a Liter of Paddy's (I am so cheap). Can't wait to see the interview.

Agreed, Kevin: given the choice, I'd rather have Powers (and I do; get a bottle in NJ every now and then).

We have Power's in PA for $21. Why go to NJ? As much as I like Irish whiskey, they, like most mainstream scotch, have this 80 proof fixation that just drives me nuts. Though I could get an 86 proof Midleton for $140! Bushmills 1608 is 92 proof, but again at a substantial premium.

My rule for bourbon is "nothing less than 86 proof," which is pretty easy. Lots of choices above the 80 minimum there. But move into other spirits and 80 is the overwhelming benchmark...especially tequila! Hell there used to be a number of higher proof tequilas, and every one now available in PA (and there are a lot) is 80 proof, even the high end brands. Yes, I know there are some valid reasons, but come on.

Give us some guts already!

Looking forward to the interview. Good news on the 12 year!

Haven't seen Powers at my State Store, Sam, I'll have to check (remember that NJ is where my wife works, so it's a quick stop at Canal's for her). But I'll tell you, I know what you're saying on the 80 proof, but the Jameson 18 has plenty of punch for an 80 proof. There's lots of stuff to it. Far as that goes, I like the standard Four Roses bottling at 80 proof, too. Maybe sometimes it's not so much the proof, it's what they pack in it.

Lew I have seen Powers in state stores for over a year now. I used to work in Cherry Hill and was able to get it for $18 from TW&M (nothing like going down a supermarket aisle of whiskey). Like Same sais you should be able to pick it up for $21.