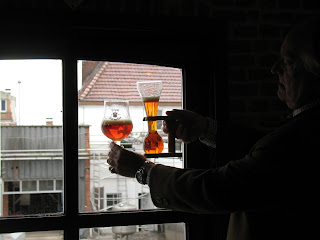 Wow. I had a serious lunch with the Bosteels, Ivo and his son Antoine. Steve and I trained to Belgium from Germany this morning (no big deal, thanks to the ICE train, about 2 hours and across the border, ho-hum), then took a local to Dendermonde, where Ivo met us and threw our luggage in the back of his Benz SUV and hurtled down the roads to Buggenhout, where the brewery has been since 1791. Really.

This is the brewery that produces Pauwel Kwak, Tripel Karmeliet, and DeuS. You may never have heard of the brewery; they take pains to make the name of the beers important, not the brewery, or, in fact, themselves. "We are not important. The beer is important." says Ivo. "We are a service, the brewery, we are in service to the beer." Steve and I turned to each other at one point and said, "The man is a quote factory," which he is, because his passion for brewing shines through like hot summer sunshine.

The picture above is Ivo holding up two glasses of beer. Take a look at them. Click on the pic and look at them close up. They are the same beer. Ivo did this to show what a difference the glass makes. That's Karmeliet Tripel in its own glass (on the left) and the Kwak glass on the right. You'd think they were two different beers. This goes to show that the different glasses for different beers are not just marketing. They show -- and smell, and taste -- the beers just how they were meant to be.

Anyway, the lunch. We went to 't Truffeltje in Dendermonde, a place Ivo and Antoine said they only went to two or three times a year...it is a Michelin one-star, and the meal was excellent. First we got an amusee bouche of a scallop in a DeuS sabayon, side-by-side with a forcemeat eel disc on greensauce: to drool for. We spooned up the excess sabayon and ate it. I must admit: I have never been a fan of DeuS. Now I understand. What a delicious beer. We had it with the seafood, and all of a sudden it made perfect sense. I get what everyone else ever said: it is crisp but complex, startling and not really one-dimensional at all. Now... was that me, or was it individual batches? I don't know. I stopped drinking it because it bored me. This was not at all boring. 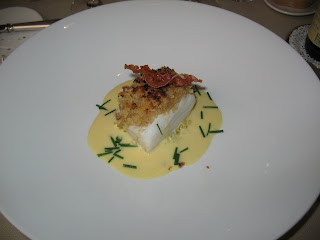 We had a filet of cod with a Karmeliet sauce (did you know Karmeliet was made with oats, barley, and wheat, all both malted and unmalted?) that was excellent (see left), squab breast with Kwak sauce (with the best damned carrots I've ever had), and about three dessert courses. Woof.

Then it was back to the midst of Dendermonde, the plaza, where we had draft Karmeliet -- rather dead, and uninteresting -- at which point Ivo hustled us next door to St. Joris Cafe where we had the bottled Karmeliet: excellent.

Well...maybe there's something to this "bottled Belgian is better than draft" after all.

We finally bolted, and Ivo wound up driving us to Het Anker when we missed our train...but that's another story, and I'm exhausted right now. Must sleep.
Posted by Lew Bryson at 17:41

Ah Kwak! Remind me to tell you one day my story of Kwak and the bagpiper.


Sounds like a great trip, hope its what you needed after a bad week.

P.S. How about a post after you get back on proper glassware for beer? (Don't worry, I'll nag you about it...:))

Come on, now we're all green with envy.

A bad draugtt Karmeliet in Belgium? Do you really expect us to believe you? And, if we did, do you expect us to feel sad for you? I might feel a little bad for Beaumont, since when he gets back he has to go to Canada where it's minus something or other (even on the strange temperature scale they use).

However, you'll return and head right into Philly Beer Week. I suppose you already have a list of trumped up complaints to try to make us all feel like we should feel sorry for Mr. Lew. You'll need to try harder.

OK, the rant is over. Sounds like you are having a career trip. Keep up the steady reports. We can all dream of having to suffer at your side through another so so fresh Belgian draught.

Tripel Karmeliet has long been my favorite tripel. I knew about the "three grains" (they used to claim that was what made it a tripel in their literature) but not that there were both malted and unmalted versions of each in the brew (Guess I won't be trying to clone this as an extract brew!). My local brewpub used to keep Karmeliet on tap as a guest tap and use the proper glass, and it was heavenly. From a bottle? Still heavenly.

Thanks for blogging the trip!

Well, I'm doing my best to follow you around symbolically with what's in my cellar, but I'm a day or two behind. Just cracked a swing top Uerige alt to commemorate your Dusseldorf visit. Now I'll have to see what Belgians I've got stashed! Having a great time, wish I was there!

I'll hold you to that story, Tom; I want to hear that one!

bill...we're gut-stuffed, and it's only going to get worse. But yeah, it's a great trip!

And everyone...the draft wasn't really that bad. It was just not so great when compared to the bottle. They don't sell very much draft in Belgium at all, and I can see why.

They are the same beer.

Amazing and educational -- sounds like you're having a productive trip all around! I'd love to sit and talk beer - and learn - like that at the source.

Is that Cod and bacon there Lew? That looks frickin' delicious.

God, I hate you! Lucky bastid.

I was going to ask you a bourbon question but now I'm just going to seethe.

Whew...sorry to take so long. Wi-Fi got REALLY spotty the last half of the trip (and it got really busy, too). Guy, that's actually an immense plate; the piece of cod (yes, it is cod and bacon; had that twice on the trip) was about the size of my fist. And we had pigeon after that.