The One Guy Visit 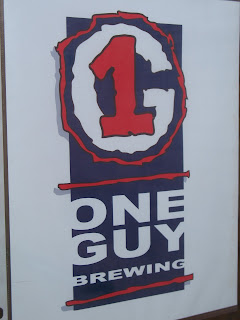 I did, as I said, visit Guy Hagner at One Guy Brewing in Berwick (still no website, or I'd link). I called when I was about half an hour out and told him to order us a pizza at King's (which, you'll notice, does have a website). Guy got pizza there when I was up to help with demolition, and it was delicious; the one I picked up now was equally good (half meatball/onion, half sausage/green pepper, and a bargain). I brought it in, said "Lunch is served!" and Guy poured us a couple of glasses of his Peach Wheat, which he said had been very popular. Easy to see why: tart peach flavor on a clean light-medium body, not too simple, not too big, and brewed with local peaches. It is unfiltered, like all Guy's beers, but dropped out quite bright.
We continued to eat and drink, while talking about how successful the opening had been. Very gratifying for Guy, after all the time and effort of getting the place going. We got Berwick Lager next: clean, refreshing, mainstreamish, and just a bit amber, kinda like Yueng -- well, you know. Then we had the surprise best-seller, the Dark Lager. I can see why, it's smooth and a little sweet, a very pleasant beer. On the other hand, Guy's not completely happy with this, and I can see why: it needs to clean up just a bit, and has some huskiness to it. Tweaked, this will be magic.

The Pils was probably the weakest of a good lot. The hop buzz was good, but the malt on the palate was a bit slippery, not clean and firm as it should be. Guy said he'd tried something with the Pils, and wouldn't be doing it again; he poured me some from another keg he hadn't "tried something" with (5-gallon soda canisters, by the way), and it was noticeably better. 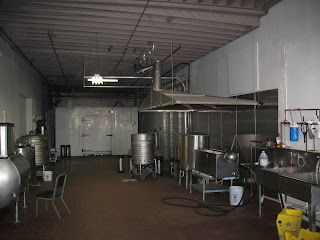 We grabbed a Rauch Bock and walked back into the brewery. As you might be able to tell from the picture, this is one of the biggest small breweries I've ever seen. The brewhouse is tiny, but there's a ton of space. Space is cheap in Berwick; that's a lot of the reason Guy's here.
You can just see the chiller on the left edge of the picture: it's a steel tank full of water, with a restaurant ice-maker sitting on top of a hole cut in the top. Ice gets made, drops into the tank, and the cold water circulates into coils in the fermenters. A lot of Guy's equipment came from eBay and restaurant auctions (he ran an eBay business for a while and knows what he's doing,) the bigger stuff came from the work he's been doing in brewery salvage. The brewery was cheap -- "under $100,000" is about all you can get out of him -- but there's a lot of sweat equity in the place and the equipment. That coldbox in the back, for instance: $1,500, and installed by a friend in exchange for beer.
The Rauch Bock, right. Not as huge as you'd expect from the name, but Guy's not really about big. It's a good clean lager, solidly smokey, and the last half of it went very nicely with the last piece of meatball pie when we walked back to the taproom.
Things are going well for One Guy, but it's very early. (People are already asking when he's going to expand, hell, I did too. Relax, says Guy, I just opened. I want to sell beer, brew beer, and just do that for a while.) A lot of his success is going to count on locals: One Guy is not exactly easy access off the interstate, and Berwick's not surrounded by cities, it's surrounded by woods and hills. Bloomsburg and Hazleton are the closest towns of any size, and I doubt many folks from there are going to travel to Berwick for beer; maybe from the college at Bloomsburg (don't underestimate the thirst of professors).
But it's going to be Berwick that makes this work. I'm hoping that the local business owners -- like the folks at King's -- will realize that One Guy is drawing people into town to spend money, and work at sprucing up to get some of that themselves. This is how brewpubs improve towns. Oh, um, of course, One Guy is not a brewpub, Guy said so. And he's right, hot dogs don't make a brewpub. But he's happy to let people bring food in from wherever, and that's where Berwick makes money. I see opportunity for a lot of businesses here: Berwick Chamber of Commerce, time for a tourist map of town! The big deal, of course, is the nuke plant: if Guy can get the attention of the engineers there, that will help a lot. They drink, they've got money, and they'll spread the word.
Places like this, and the two new breweries in Williamsport, Abbey Wright and Bavarian Barbarian, and Elk Creek Cafe & Aleworks in Millheim, Voodoo in Meadville, and more coming along, these places are filling in the beer map in Pennsylvania, just like the beer map's getting filled in elsewhere. The Brewers Association noted not too long ago that the average American now lives within 10 miles of a brewery; Pennsylvania's trying to beat that average. There is a wave of small breweries opening. It's exciting. Spread your attention around, try new things. 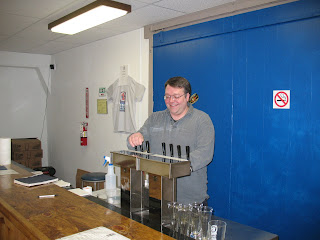 Speaking of which...there was one more beer to try: Cinnamon Boldy. What the hell? "We kind of named it for our dogs," said Guy. "My wife calls them "boldy dogs" because they just charge into everything." He handed me a glass: it was a light gold, and the cinnamon came bursting out of the glass, not like a little cinnamon on an apple dumpling, more like cinnamon in Moroccan stews. Bold, like the man said. The beer in the mouth was big, blazing, almost like a tea made from cinnamon hearts, but not clinging or gagging. I am not a fan of spice beers, but I'll be dipped if I didn't enjoy this. I've never had anything like it, and if this is the kind of thing the hop shortage brings about, well, it's not all bad.
Get thee to Berwick.
Posted by Lew Bryson at 08:11

Had to snicker with delight at the Lakefront Brewing label behind Guy's head -- from one very local brewery to another, I'm sure the Klisch Bros. are smiling too. Care for a swap Lew?

Thanks for the link to King's Pizza! They definitely have some tasty looking pies poised for my next visit to Guy. Glad to hear that he allows outside food. This is looking more like a family-friendly trip in the near future. You're right, Lew, this could be a very good thing for Berwick. See you soon, Guy!