Früh-stuck and a Day in Düsseldorf 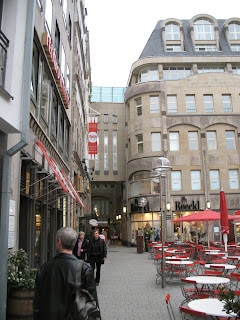 Stephen and I eventually got out of the hotel this morning and walked up to Früh am Dom, the brewpub just off the Domplatz. We had one of the offered brewery breakfasts (breakfast is frühstuck in German; Früh plays with this and offers "Früh-stuck"): 3 fried eggs with bacon and bread. Delicious, especially with three glasses of kölsch. Then we hopped on the train up to Düsseldorf. It was a bit of a gray day today, and never did get better, though it did get worse at points.

One of the good points was the D-dorf U-bahn system, which quickly dropped us off on the east edge of the Altstadt. We wandered about in the rain, and stopped in a Jägermeister bar, Zum Hirsch. All Jäger, all the time, but we got two Frankenheimer Altbiers at the happy hour price of E1.10 each: nice, Frankenheimer is probably the sweetest of the altbiers, and that was welcome.

After that, we wandered up to the Rhein and Im Goldenen Ring, where we tried the unfiltered Schlösser Alt; "Jonges" Alt (literally 'young old'). It was yeasty, fruity, and lively. The filtered was less fruity, and walks the line between the caramel sweetness of Frankenheim and the dryness of Uerige and Füchschen. Then we stopped in Zur Uel, a very comfy spot and one of my fave Altstadt kneipe; a short walk from Im Füchschen, which we made afterwards. We enjoyed the view of the köbes working the bar, and enjoyed the altbier. It was really quite dry, and while hoppy, had a pull, a catch, that came primarily, I assume, from the roasted malt and the extended fermentation. 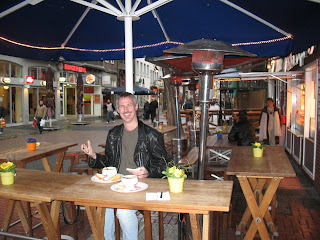 Hmmmm...Then we had fischsuppe at Gosch Sylt, a very nice open-air fish joint at the corner of Bolkerstrasse and Hunrückerstrasse: excellent fish soup, "full of damned fish!" my notes say, and as you can see by how happy Steve is, he fully agreed. Great to be eating hot soup outside under the large umbrellas.

Steve needed to work on a hotel story, so while he checked out a hotel, I ducked into MaiTai, a kitschy cocktail bar with a bamboo bar (that apparently has been around for 20 years). I got an "Exotic Rum Punch" that was pretty damned tasty: fruity, rummy, yummy. Man does not live by beer alone!

Man doesn't live by altbier alone, either: we walked south, and hit the Pilsner Urquell ausschank (brewery outlet) where Steve got a Pilsner and I got the Kozel Dark, which was dryly medicinal (which is much nicer than it sounds!). We ran into an American here, and chatted a bit. We continued the non-altbier trend a bit by stopping at a Woyton coffeeshop (across the alley from a Starbucks; the damned Seattle interlopers are everywhere!). Best German coffee I've had in a while. On with it: we stopped at a Spanish-type bar/tapas place, Cafe Madrid, and tried a glass of sherry. Odd concept, watching Germans drinking Estrella Damm when they had perfectly good altbier right at hand. The sherry wasn't that good either.

At this point, we decided it was time to get serious about what we were doing: we're working, dammit! (Actually, that was work for Steve: he's doing a wine piece.) It was off to Uerige, where we sat in the front room, had a few altbiers, and chatter with a native who worked with oil pipelines. I got some mettwurst, but then we moved on, going back to Schlüssel, where Steve craftily employed my stealth German skills to engage two older women in conversation for a story on nightlife he has to do (I actually know more German than I think I do; I blossom under the pressure of conversation, and the ladies complimented me). More altbier ensued -- we bought them a round -- and we were all quite happy when we left. 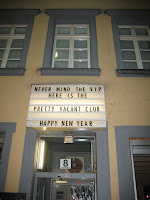 Steve wanted some schnapps, said his gut was upset, so we wound up at a place called Till Eulenspiegl, the trickster figure of German folklore. He had an Underberg, I had a shot of Karn -- whooee! -- and some more Frankenheim Alt. One more stop: Zwiebel ("onion") just because I was curious: sad-looking inside, almost deserted, and we had more Frankenheim, played pinball (Steve kicked my ass), and then headed back to Köln. Steve went back to the hotel, I went out to Päffgen, had a few more kölsche, and got my notes in order...which is how I wrote all this. Because at this hour of the night...it starts to blur. Good notes are essential...although I'm starting to think that taking pictures of places like this are important, too.
Posted by Lew Bryson at 19:23

Man -- Frühstuck with eggs and meat, how the times have changed!

Wow. I tried counting the drinks you had that day and figured 20 at a minimum, simply by subbing "two" for every "some" or "few". Are glasses of kolsch and altbier much smaller in Germany? I'm in awe. Sounds like a great time. There's a discussion on Appellation Beer on a column claiming that beer drinkers don't talk about the positive effects of alcohol -- if the author reads this post, you'll be her new favorite writer.

Bill,
Kölsch and altbier ARE served in much smaller glasses: 0.2 and 0.25 liter, respectively. Also, that was over a 14 hour period, and we did a LOT of walking and eating while we were doing it. That said, when I was in Köln last January, I did keep count, and I drank a bit over 4 liters of beer in the course of 14 hours. I also walked over 5 miles: it burns it off.

I'm in that discussion, BTW: check out the link I left. I'm down on the buzz. And Lauren already likes me: we've caught the buzz train at the same station.