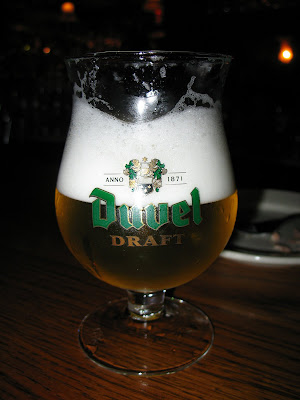 Philadelphia exerted itself -- that's America's Best Beer-Drinking City -- and, ahead of Manhattan, ahead of Boston, ahead of everyone else, tonight hosted the debut of Duvel Green Draft, the new -- truly new -- beer from Moortgat, at -- where else? -- Monk's Cafe. Everyone took pains to point out that this is not just Duvel on draft. Duvel Green is single-fermented and filtered, where Duvel is fermented twice (second time in the bottle, both using the same yeast, we were told), and it comes in at a reduced 6.8% ABV. It is, however, brewed with that same yeast, same Styrian Golding and Saaz hops, and the same pilsner malt as the original. It is a completely new beer, not the "Duvel Gefilterd Green," not Duvel without the second fermentation. (Update: Michael Moortgat, quoted on BeerAdvocate today, directly contradicts this: "Duvel Green is certainly not a new beer," he said. Looking forward to getting this straightened out...)

Tom Peters and Fergus Carey went to Belgium, put the pressure on -- what, you're going to debut Duvel Green Draft in Manhattan? In Boston? You're not going to debut it in the biggest market for Belgian beer in North America? -- and Duvel Moortgat thought twice. There was some quid pro quo, of course. The beer's not officially in Pennsylvania: Duvel gave the beer to Monk's, and Monk's gave it away at a private, invitation-only event. Manhattan will get the beer officially: "20 accounts, so we know if it's going to be a success, and then Philly gets it next" said Duvel rep Megan McGuire. (I think that's how she spells it; if not, my apologies, and I'll fix it ASAP.) And if anyone gets really official about it, it never happened. But lookie here, Manhattan, sniff this, Boston: Philly got it phirst. Damned right we did; Ommegang's Larry Bennett told me the kegs had just been filled in Belgium on Friday. Anyone else get any yet? No, didn't think so. 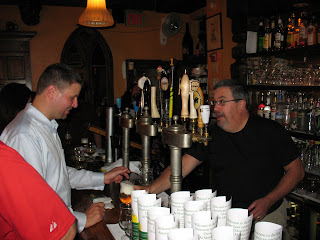 How was it? Scary drinkable for 6.8%, as you might expect. Light-bodied, with a spicy nose (Duvel is a bit heavier and has a more complex nose; more carbonation, too), very refreshing. One other thing, which was the serendipitous result of Monk's foods put out for the tasting (diver scallops in a Duvel beurre blanc, fine sausage with coarse mustard, and a salmon poached in Duvel and Hallertauer hops): I may have finally found a beer that truly goes well with fish, something I've hunted for without much personal satisfaction. The salmon and Duvel Green really complemented each other: the fish was clean and toothsome, the beer had a slight hollow in the middle filled in by the fish. It was great. (That's Tom Peters handing a glass to Moortgat/Ommegang's Bill Wetmore.)

As for the whole Manhattan-first thing, let me say right up front that I think it's a mistake. Here's why. Foreign brewers always want to be in the New York market first; why? Because they think it's the most important city in the richest beer market in the world (sorry, China, but that's true, too: there's more beer sold in China, but there's more profit made on beer sales in the U.S.). Sure, that's true, but success in the Manhattan beer market comes only with application of much money in promotion, advertising, and buying leather jackets for bartenders. And when you stop spending money, well, guess what? It's "What have you done for me lately?"

New York is a market that lives on the Flavor of The Month, and when your month is over, you're done. As we said to Megan, you know what you need to succeed in the Philly market? Good beer. And as Flying Fish brewer Casey Hughes correctly pointed out, if you try that promotion/advertising/leather jacket stuff in Philly, it's likely to backfire on you anyway.

We'll be happy with having beat the world once again. I only feel sorry that more people couldn't share in our victory. Blame the marketers. Blame them for "Duvel Green," too, by the way: we were told that "Green" was chosen because the beer is younger than Duvel. Green. As in 'not ripe?' I have to believe that no one at Moortgat speaks colloquial English, and they have a tendency to not listen to their American employees who do. Green? Why not just say, "Because it's not Duvel Red. It's different." Hearing this explanation made me uncomfortable.

By the way, that Heavenhill Anniversary Bourbon, the sample I told you to ask me for when you saw me? Well...I took it along, and some people made pigs out of themselves. All that's left is about 2 oz., just enough for me to make my notes. Sorry. I will say this: it is a lot better with a splash of water. Downright wonderful, in fact.
Posted by Lew Bryson at 21:19

Had that with my dinner at Den Dyver back in May. Very nice and along with the Mars. 6 which is out now, we have two great semi-low ABV beers from the mother land to enjoy.

Wow, can't wait to try it. Could end up being my new "house" beer on draft.

Dan? Are you sure it was on draft? The Moortgat people have assured us that this is the first Duvel draft anywhere, like the Chimay White draft a few years ago. Duvel didn't do draft until last week. There are bottles of filtered Duvel, with green letters, in Belgium; is that what you had? This is supposed to be a completely new beer.

That whole "Green" thing was probably their watching Al Gore and those IBM commercials. Everyone likes "Green". They probably also figure it could play well with the Irish community up that way. Can't wait to try it though. Looking forward to getting up to Boston sometime soon.

Sorry, I should have said bottle, I thought it was made only for a few accounts, though I could be wrong.

You may not be all that wrong, Dan...it's starting to look like there's some iffy info floating around out there. Still, what it really comes down to is two things. First, it's a nice beer. Second, we had it on draft before New York did. Nothing else matters.

I'm pretty sure it was listed in the beer list for BCTC this summer, though I don't recall actually seeing it there. I do remember saying "huh, I hadn't realized Duvel was bottle-only."

Anyhow, thanks for making us losers not invited to these special private events feel even more losery. :)

Hey, there's only so much room in the back at Monk's!

Does this mean I shouldn't tell you about the Palm/Rodenbach dinner I went to there last night?

Related note: do you know if it is true that they have discontinued Redbach? Twas my wife's favorite beer