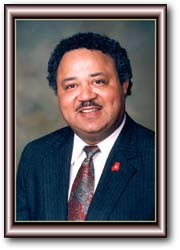 I have a stats tracking package running on the blog -- no details, but that's how I finally found my Little Miss Cyberstalker -- and something odd has come up in the past month or so. One of the things it tracks is the terms people put in various search engines that bring up my blog. As you might expect, the most common search term is "Lew Bryson," followed closely by "Seen Through A Glass;" people who've heard of me or the blog and are looking for it.

What's odd is that the next most common search term is some variation on "It drink pretty good, don't it?" Those words, of course, were immortalized in the halls of beer dopiness by Alabama Representative Alvin Holmes of Montgomery, in his speech on the "Free the Hops" bill in the Alabama legislature, an attempt to do away with the state's bizarre 6% ABV cap on beer. I posted on it, and I am amazed by the number of people who come to my site looking for it.

So, who the hell is spreading the word on this guy? It's not me, they're coming here. Is it possible that Holmes has become a new icon of stupididity? (I know, I spelled it wrong on purpose because it sounds dumber that way.) Weird that this is such a topic of curiosity...
Posted by Lew Bryson at 10:11

No details on the drawing and quatering of the cyberstalker?

My attorney's told me not to discuss the case...so, no details yet.

Some of the current search terms showing up for my site:
>
jack curtin obituary

naked breasts
<
It do give a man pause...

E-mail me (lew(at)lewbryson(dot)com), be happy to send you the info. It's pretty easy, and while it is somewhat limited, it's quite useful.

I first heard the Holmes speech on morning radio. I searched the internet to see if he was really real.

They still play it every now and then so I'm sure more people are searching for similar reasons.

Oh my God, you mean like a sound clip on a "morning zoo" kind of show? That's perfect!

That'll get the hits up on your site. :)

'Nuff said about LMC, let the wheels of justice grind. But it would be interesting if she was a New Dry or some other anti-alcohol goofball.

My zythophile beer blog is currently the number one on Google for the search outsize menswear chain Massachusetts ... needless to say, I have never blogged about the availability of XXL clothing for males in the Greater Boston area ...

This past weekend I was in Asheville, NC at the BrewGrass Fest spending time with a board member of the Free the Hops organization. The phrase "it drink pretty good, don't it" came up MANY times during the weekend!

Alvin Holmes is THE poster boy for clueless politicians!

You can go to Philadelphiabrewing.com/brews and place your cursor over the "seasonal brews" icon to hear the sound clip.

Sorry I'm so late on this. Opie and Anthony (Sirius/XM Satellite radio) have been playing the HELL out of that clip and satirizing it like crazy. They tend to do a lot of "google bombings" and someone probably got cute and decided to look up the footage. My guess is that O&A have been giving this guy his most widespread coverage because that radio show and now your blog are the only two places I've seen this referenced.