The Fall of the Corn Curtain: Go Tour the Tom Moore Distillery 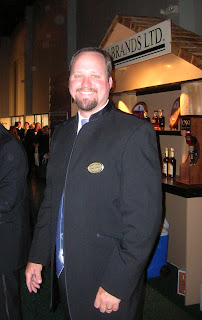 A somewhat momentous date tomorrow: as of October 1, the Tom Moore Distillery, formerly known as the Barton distillery, is open for tours.

For the longest time, Barton was the Tibet of distilleries, tucked away down a quiet, thickly tree-lined street in Bardstown. They didn't give any tours, even guys like me didn't get in very often. You had to have a reason. Barton sold Ten High, Very Old Barton (that's six years very old), and some other similar "value" brands -- don't knock it, VOB is some damned good bourbon for the price -- mostly in Kentucky. They had their business, they did it, and outside of kicking up their heels a bit at the barrel relay races at the Kentucky Bourbon Festival, they kept a real low profile.

1792 put a crack in the armor. That's their premium bourbon that has done right nicely for them. When it did well, and "Barton" started getting some respect, the folks at Constellation Inc. (the world's largest wine company, the importer of Corona for the U.S.) started to realize that they could be getting in on some of the wild adoration popping up for bourbon distillers. So after a bit of sprucing up -- not too much; you can still see deer in the edges of the woods around the warehouses -- they decided to let you in to see what they do.

"There’s no flash here," master distiller Greg Davis told me (that's him in the picture). "You’ll see a true operation. If you’re a gearhead, you’re gonna go off on this. That’s one of the great things: it is designed to produce bourbon. It's not about touring, not about making things pretty. This is how it’s done, period." That's okay, Greg, there's a place for nuts and bolts, too.

Can you even get VOB in Pennsylvania without placing a SLO and buying a whole case? Also do you have any idea where you can purchase some of Heaven Hill’s old line brands without going all the way down to Kentucky I would love to secure a bottle of "mellow corn" or "Cabin Still" I know most of them are pretty average but I think they are cool to have just the same

No VOB in PA; you can't even special order it. And no, I don't think you can get many of the "old line" Heaven Hill brands outside of Kentucky. There are a couple exceptions, but I picked up a bottle of Mellow Corn last week cuz I knew I couldn't get it elsewhere. If anyone knows different, please chime in!

Nice name, indeed! Any relation to the Guckenheimers of Freeport, Pennsylvania rye whiskey fame? The PLCB will order a case of Guckenheimer bourbon for you, though. I kid you not! Check their website.

OUCH, you're right, of course.

So Lew How does that Mellow Corn pour? I have always wanted to try it. Is it better than the one they sell up here in the mason jar?
Also tried to SLO a bottle of Guckenheimer blend but the aparatchiks at PLCB told me I needed to buy a whole case. I mean that is a lot of blended whiskey even for a guy who likes an occasional Imp or Kentucky Deluxe or Philadelphia, so I told them thanks but no thanks I would wait until I passed through a grown-up state with normal package stores. As for connections to the Guckenheimer family, none to speak of, my only conneciton is that as a kid I found an empty bottle of Gukenheimer rye in my Grnadparents' neighbors coal celler in Cannonsburg PA and I really dug the name .

Haven't gotten to the Mellow Corn yet, JP; been busy. But yeah, it's different from the Mason jar stuff. That should be Georgia Moon, and the difference is that Mellow Corn is barrel-aged. I'm looking for it to be a lot smoother.

Ah ha!
My google alerts picked up the word Guckenheiner being mentioned.

I’m the one the opened the Guckenheimer pipeline into PA.

I have a few bottles of Guckenheimer.
I’m in Westmoreland county PA

My Grandpap used to drink whiskey at the club he owned. In 1982 he died, and the drink lost popularity at the club, and sometime after that, the PLCB removed it from its carry list.

In 2000 I tried to order a bottle, but the PLCB stated that the product was discontinued. I assumed that it was not
being made anymore. But I found later on an internet search that it was being sold in Ohio, so I went to get a case.

Meanwhile, here in PA, you could not even SLO a case of Guckenheimer because the PLCB told me it was not a
brand that the PLCB carries, and therefore an SLO was NOT possible. And if their brokers don’t carry the label, the PLCB won’t list it as an SLO.

So I call the broker in New Jersey informs me that Guckenheimer is already available in Pennsylvania, being sold under the Halers label. But I want the label Guckneheinmer, so after persisting, the broker agrees to contact Heaven Hill to have a case of Guckenheimer thrown on the next trailer load of whisky into PA. In the mean time, that falls through, and I end up calling Heaven Hill again to request the case be shipped up on the next load. Finally, it gets straightened out, and I get my case of Guckenheimer. Ever since, it has been listed with the PLCB as an SLO.

We had a big Guckenheimer party at the club when we got our case of Guckenheimer. And now it is the best seller at the Club. It took several orders for more cases of Guckenheimer for the PLCB to get the process down so that I didn’t have to keep bugging them, and reordering, but now, things run smoothly as the pipeline is open. But you need to specify ’Red Label’ when ordering to get the right Guckenheimer.

I collect Guckehneimer stuff, so tell me what you got, and I’ll make an offer.

"And be sure to ask them what's aging in the bottom three floors of the warehouse; kind of a surprise, there."
As one who managed to get in to tour when it was still simply Barton, I'm going to spoil the surprise (if you're talking about Warehouse Z, Lew), and start a Tom Moore touring landrush!
Warehouse Z houses aging barrels headed for Ridgemont Reserve 1792 which, according to retired Master Distiller Bill Friel, is actually a marriage of 3 different tastes/profiles. Anyway, on offer that day was a single-barrel sample (most of us made it plural, samples) of straight-from-the-barrel 1792, and it was one of the damnedest, finest whiskeys ever profferred. (We even managed to find a liter water bottle under the car seat, and begged a refill for the party later that evening!)
Alas, the only way to taste it in that form is in that warehouse. Worth the trip.

Not what I was talking about, Tim, though it's all true: Warehouse Z, out on the edge of the property, is indeed where the 1792 comes from. The "surprise" I'm referring to is nowhere near as fun or delicious, just kind of interesting.