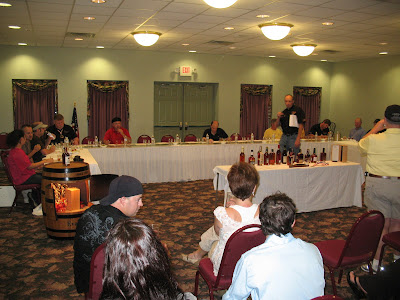 I left you in the last post at about 4:00. Nothing much happened in the next three hours: picked up a few souvenirs, got some cold drinks, and then I sequestered myself in my room and wrote the sidebar I'd done that interview for earlier in the afternoon. By the time I was done with that, it was about time to head to the Bourbonian Taster of the Year event.

This is an outgrowth of the StraightBourbon.com forums. The folks there are dead-serious about their bourbon...but they don't let that get in the way of having a good time. The BTOTY event (I was told) grew out of some folks talking too big for their britches about how they could pick out different bourbons blind. Bettye Jo Boone, a very enthusiastic SB'er who works at Heaven Hill and is a Beam, connected to that whole family (and a sweet person to boot; I'd been hearing about her for years and it was a pleasure to finally meet her) called them out. Not only could they not pick out different bourbons blind, she challenged them that they could not pick out their favorite bourbons blind (and she was, of course, pretty much right; I love blind tasting). Thus was born the BTOTY.

This was the fourth annual competition. The first three had been held at Bettye Jo's house, but it was finally outgrowing that. The SB's have taken over the General Nelson Best Western here in Bardstown during Bourbon Fest for a few years now, and the management's apparently been pretty good about it, allowing them the use of the gazebo out back for tasting meets Friday and Saturday nights, when you might find anything in the way of American whiskey on the table: pre-Pro, 1950s bottlings, microdistilled stuff, even non-whiskey spirits (and always a few beers). They asked, and the General Nelson graciously allowed them to use their banquet room for the BTOTY challenge.

About two weeks ago, I got an e-mail from Gary Gillman, a Torontonian I met in Philly at Book and The Cook a few years ago, and then again at Bourbon Fest two years ago. Gary wanted to know if I'd be interested in attending or competing in the BTOTY. I quickly accepted an invite to watch -- maybe next year on the competing! -- and we were set. I showed, everyone was real nice to me (even though I'm not as dedicated to bourbon as they are, drinking so much beer as I do...), and I settled in to watch.

Here's the set-up. Prospective competitors get a list of twelve bourbons: "the pool." From that pool of twelve, six would be selected in secret, decanted into identical, unlabeled bottles (looked like Evan Williams bottles, probably courtesy of Bettye Jo), and then poured for each of the contestants. They would then rely on their memories, their knowledge, and their palates to identify the six whiskeys. If they thought they knew the whiskey, they could just put down the name for a full ten points if correct; if they were unsure, they could guess the distillery (which was tough on some!), the age, and/or the proof, and if they were right (age and proof had a narrow range of "right" and didn't have to be precisely correct), they got partial points.

There were a passle of door prizes while the contestants sniffed and tasted. Hats, t-shirts, um...more hats and t-shirts, while there was also a "Kentucky draw" for a ton of Kentucky stuff: home-made jam, Gethsemane cheeses and fruitcake, UK gear, a whole country ham: tickets were $5. The spectators paid $6, contestants paid more, all to support the event. 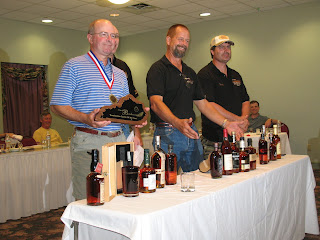 When the twenty minutes was up, everyone handed in their forms, and the scores were tallied. The bourbons were revealed: out of the pool, the judges had selected Old Grand-Dad 114, Old Charter, Very Old Barton Bottled in Bond, Ten High, Elijah Craig 18, and Weller Special Reserve. I believe almost everyone got Ten High right; hell, I guessed it from where I was sitting just looking at the color. When everything was said and done, Randy Blank had pegged four out of the six (and caught the proof on one of the others, I believe) for a total of 42 points, the highest score in all four years. (That's Randy holding the Kentucky-shaped plaque, with second place winner Doug Philips and third place Randy Goode.) Chuck Cowdery, who'd won the first two years, came in fifth, I think. Quite gracious in defeat, too; phlegmatic, even. (And thanks to Chuck for sending the names of the winners!)

We all toasted the winners with sips of that William Heavenhill whiskey: Heaven Hill quite generously donated a bottle to the event. It was clearly an older bourbon, with evident wood to it (it's 18 years and 9 months, as I said earlier), and honestly, oddly, I preferred the much older Parker's Heritage that just came out. I'm looking forward to trying it again at home with a smidge of water.

After it all was over, Chuck and I went and grabbed dinner at a Mexican place on 3rd St., then hit Toddy's for cheap bourbon bargains. I got a Heaven Hill 6 YO BiB, a VOB BiB, and a J.T.S. Brown BiB, which were each under $15; "That's the best bottle of bourbon you'll get for $12," Chuck said about the Brown. Saving them for a piece I've got coming up, so no reports (I picked up another Heaven Hill today, another BiB with no age statement; ditto). Then we went back to the gazebo, where things were in full swing. A great crowd, good people, and very dedicated to bourbon whiskey. Bourbonians, all of them.

Nothing much happened today, I had to write, I napped, I went over to Heaven Hill and picked up some bourbon orange marmalade for my mom, and then walked around Bardstown a little. And now, I gotta get ready for the Gala. Talk to you later.
Posted by Lew Bryson at 16:41

Post like these are to me at this point in time like New York Breweries and that vital information about spiedies and garbage plates was to me back in 2004. I need to know more about bourbon.

And did you get near any of that Welsh western Kentucky BBQ mutton? I need to get me some of that.

Everyone needs to know more about bourbon! I'm embarrassed to way that the only time I've had the western Kentucky-type BBQ mutton...was in Manhattan, at Virgil's. I know, I know. But it was delicious.

Is Heaven Hill still selling the 10-yo BiB? Last time I was through Bardstown, the liquor store I stopped at only had the 6-yo, which is good stuff, but I like the 10-yo a bit better.

Thanks, Chuck. T.W. Samuels, which I almost bought this afternoon. Jeez...

I didn't seen the 10 YO BiB, Rob. I have about half a bottle left at home, and I agree, it's nice stuff.

The Heaven Hill 10-year-old BIB is history. Too much demand now for 10-year-old whiskey for them to sell it that cheap.