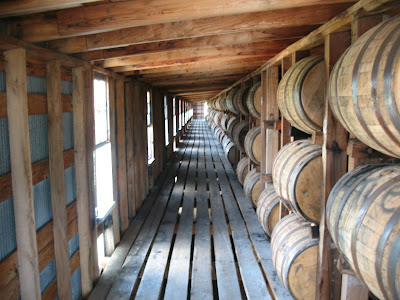 Friday morning: After a quick shower and breakfast, I headed out Rt. 62 to the Jim Beam distillery in Clermont, where I joined their press group for the distillery tour. I've been through Beam a few times, but I always figure there's something new to learn.

Sure enough, I learned something new right away: just because a distillery said you can't take pictures last time doesn't mean they'll say you can't take pictures this time. And didn't I leave my camera back in the room! Oh, well, it didn't matter anyway, turned out: when I took my camera along out to Heaven Hill later that afternoon...the batteries were dead. Que sera sera. (By the way, this shot of the top floor of Warehouse Y at Heaven Hill has nothing to do with today; I took it back in June. Just some scenery for you.)

So, the distillery tour at Jim Beam. You'll have to fill in the generalities -- how distilling is done, how long things age, and what's in bourbon -- on your own, and there are some excellent ways to do that; I've just got a few tit-bits for you.

For instance, this distillery is big. They go through 8 truck-loads -- semi-trucks, not little straight-bed haulers -- of grain every day, five days a week, 10 months a year. The corn's from Kentucky and Indiana, the rye comes mainly from Minnesota, and the barley malt from northern Indiana (which surprises me). The distillery (and the one at Boston) makes only bourbon; they bottle other spirits (they were running Lord Calvert when we were there), but they only make bourbon. There are 70 warehouses (70? 71? Damn, I didn't take my notebook, either!) in four spots within 30 miles; the warehouses include a few single-story 'flathouses', but mostly they're standard 'ironclad' rickhouses, including some new 9-story 50,000 barrel dreadnaughts (see, that's a nautical extension from "ironclad'...).

We tasted a little 68.5% white dog -- corn eau de vie -- and then, in the dump room, some 62.5% Knob Creek, right out of the barrel. It was awesome, sweet and authoritative. We drank that with Booker Noe's toast: "May there be no hell...and if there is, I'll see you there!" 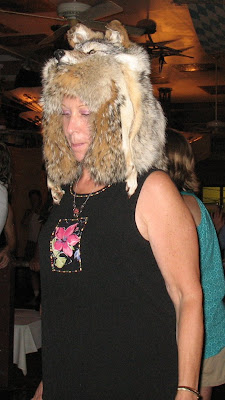 Then it was off to Booker's house in Bardstown for the annual Bourboncue, a lunch that features a short bourbon tasting, lots of stories from Booker's son Fred Noe -- who has become a pretty good story teller, if not the charismatic figure his dad was -- and a bunch of pig meat and fixin's. I like this event, because it's not just bottom-feeding media members like me and a bunch of wholesalers: there's neighbors, some of Fred's buddies from the military high school he attended, and just folks.

And the barbecue's pretty damned good -- Bootleg Bar-B-Q, "so good it ought to be illegal," which is beside the liquor store on Bardstown Road where Chuck Cowdery and I stopped Thursday night. It's pulled pork with the sauce already all over it, which purists despise...I et it right up, and had one rib, which was NOT all sauced-up, and was pretty damned good. The beans in pot liquor were PDG too. (Oh, and again, this woman wasn't being eaten by a coyote at the Bourboncue, but it's kind of a funny picture, no?)

I had to run after bolting lunch; had a 2:00 phone interview back at my room. And...I took a corner too sharply -- not too fast, but too sharp -- caught the curb, and ripped the sidewall of the rear tire on my rental crapmobile. I could hear the air hissing out. Damn. I pulled over, locked it, and hustled to the room, cranked up the AC, and did the interview (you'll see that in Massachusetts Beverage Business in November, a pair of single malt sidebars). Then I changed into shorts and a t-shirt, and went and changed the tire. Damn again.

After I got that done, and told the rental company about it (and can't I just wait to find out how much reaming that's going be...), I went out to Heaven Hill's Bourbon Heritage Center, where the lovely (and truly talented) Lynne Grant greeted me. Lynne was lured to Bardstown to create and run the Bourbon Heritage Center after running visitor centers for The Macallan, Famous Grouse, and Highland Park. Lynne gave birth to her first child, Hamish, a week after Bourbon Festival last year; she and her family are traveling to her home in Scotland to show him off tomorrow.

Lynne had a sample of the new limited edition William Heavenhill 225th anniversary bourbon for me. It's 127.6 proof, 18 years and 9 months old, and there are only 225 bottles, selling only at the Center...and they're $500 each. Jaw-dropping. (It was a sample, BTW, not a full bottle. But it was enough that I'll be bringing it with me to some events in the future to share the bounty, so...if you see me, what the hell, ask! Update...already shared 7/8 of the bottle. Sorry.) I got a chance to taste a little later Friday evening, but...I've got work to get done right now, so I'm going to call this a post, and get that done.
Posted by Lew Bryson at 23:37

So hold on a sec....if Clermont and Boston distil nothing but bourbon, where in heck is the rye distilled?

I know, I know...trying to get any relevant info outta Beam is like like asking Coca-Cola for an autographed copy of their formula. But still...(ha, a pun!)

You know what it really means, Michael: just like everyone else, just like the whole damned market did for 60 years, our guide forgot rye. And to be honest, so did I, because I was too busy wondering where all that other bulk stuff came from. When you're only mashing rye two or three days a year, well, you know, it slips through the cracks.

Man, for the days when they were mashing rye for the entire distilling season here in Pennsylvania, bourbon be damned! Overholt, Large, Dillinger...when is someone going to get this state back in the rye business???

To be honest, I'm still glad I can get the stuff from ANYONE. We almost lost it entirely a few years ago. Just like great comedy, timing is everything!

That woman has a serious Mullet problem...:)