Back in San Francisco 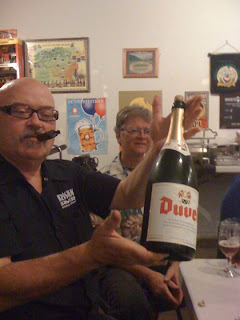 It's WhiskyFest season again, and I've been running around the Bay Area since Wednesday evening. The Malt Advocate staff, all six of us, landed around 5 local, just in time to get the news of Doc Halladay's epochal postseason no-hitter. We were pumped for the evening. The women headed out to dinner, John and Jamie and I headed for Toronado and a rendezvous with beers and Dave "Big Daddy" Keene.

We found 'em. I got stuck into a Moonlight Death and Taxes schwarz right quick, then Brian's Twist of Fate and Bombay by Boat, both on cask. We got sausages from Rosamunde next door (got my usual Merguez, awesome, and had a bite of a "spare" Thai chicken with slaw and satay; outstanding), then moved into the back room to try four vintages of Cable Car (sigh...), and dove into the big Duvel you see Dave holding up here (that's Jamie in the background). We wound up heading out to the Pi Bar (more Death & Taxes and a couple slices), then closed the hotel bar (Trumer Pils, always welcome).

Dang. I thought I'd get more written -- about lunch with Jay Brooks at Triple Rock, Beer Revolution,  vegan soul food (really), Angel's Envy, a beautiful mojito at Zuni Cafe, and a dram of 35 year old Ardbeg this morning with Rachel Barrie...but I've been watching the Blue Angels roar through the amazingly blue sky over the city, and Thomas called to let me know he got part of his birthday present (a fog gun