Pennsylvania's wineries get all the breaks. They get those nice roadside signs telling tourists where they are, they get to be the only wines sold outside the State Store System (although the State Store System repays the favor by largely ignoring them (of course they do: they're not part of the monopoly, so they must be punished!)), and they get to have winery stores, off-premise stores where they can sell their wines without the PLCB running the show. Up until now, Pennsylvania's brewers didn't do anything like that. Up until now, Pennsylvania's brewers were just selling at the brewery. 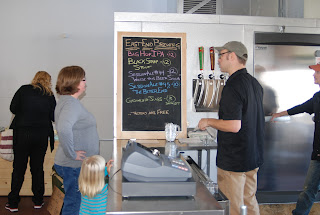 Up until now...or rather, up until last Friday, when East End Brewing opened their Growler Shop at the Pittsburgh Public Market in the Strip. They're filling growlers Fridays 12-6, Saturdays 9-5, and Sundays 12-4, from four taps: three of the year-round beers -- Big Hop, Monkey Boy, Black Strap Stout, Fat Gary, or the Session series -- and a seasonal. There may be more taps coming in the future, but for now, it's just those four; no bottles, no kegs. They also have East End shtuff: caps, shirts, glasses, and yes, Black Strap cake mix (how about some more of that coffee?). (Yes, if you've seen this post before...that's a new picture, and that really is the Growler Shop; thanks to Douglas "Father Spoon" Derda of Should I Drink That? for the pic!)
I like this idea. Local beer at the local market. What could be better? Well...local beer and your favorite beer writer at the local market! It looks like I'll be doing a signing at the Growler Shop on Sunday afternoon, November 14th. Hope to see you there!
Posted by Lew Bryson at 10:59

You whore. And I mean that in the nicest way.

It's good for both of us!

I have often thought it would be cool to have growler home delivery, like a milk man!

What's the PLCB provision they're working under here? Just curious, since the state's retail liquor monopoly also regulates their competition, the state's brewers and distributors.

Is this a new allowance, or more like the One Guy "Hey, this is all the food you need to serve to be a brewpub" kind of thing?

Sam, PBD...
I'm not really sure! I suspect it's something like the grocery/gas station beer loopholes: always there, no one ever took it up. But I don't know.

I don't know what time your event will be, but the Patriots and Steelers will be at Heinz Field at 1:00.

He was supposedly able to prove to the LCB that it was legal, but they still weren't buying it. After weeks of investigating, they finally allowed him to open.

Your breweries get those cool road signs? I'm going to have to appeal to our governor. I don't know why it didn't occur to me: our wineries get them. Wineries? What the ... ?

No, Jeff, just the wineries. What's it take?

I discovered something a few years back while "prospecting" in the code for info about Growler sales for a non-pub brewery like ours. I requested a clarification from the Lawyers making up the Board, and eventually they published a board opinion... which I used this year to prove to the plcb investigators/enforcement people that this is permitted in our state... er, um Commonwealth.
Kinda like hitting them with their own stick.

A lobby of ONE. And a squeaky one at that!

Home Growler delivery is apparently permitted too, but quite a logistical feat to pull off!

Don't get me started on the amount of Beer Tourism in this area, and the total lack of State-sanctioned Brewery Signage to support it.

On further review, the Steeler game on the 14th is the Sunday night game. Maybe I'll come down to the Strip and apologize for misinforming you in person.

That would be quite generous of you.